After the successful demolition of the Foix Thermal Power Plant near Barcelona, Lezama Demoliciones embarked on another long-term project.

This was the demolition of the Anllares Thermal Power Plant, located in Páramo de Sil (Leon), with the work starting the work in June 2019. 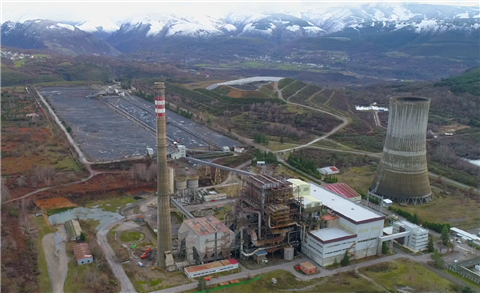 The significant experience acquired in the demolition of the Foix Thermal Power Plant served as a basis for executing this new project successfully, as well as providing an example of implementing improvements in demolition work in terms of quality, environment and work safety.

In this case, Lezama Demoliciones was working with a new company, Naturgy. It is the first demolition project executed for the energy company, which was followed by La Robla and Narcea thermal power plant projects, located in Leon and Asturias, respectively. The Anllares Thermal Power Plant, closed in December 2018, and had a single 365.2 MW thermal generator, jointly owned by Endesa and Naturgy.

The plant’s characteristics included a series of elements that represented a major demolition challenge. First, the slender chimney stack and large cooling tower, 150 and 110 m (492 and 360 ft) high, were demolished using explosives.

Next, the boiler, 50 m (164 ft) high and an apparent volume of 177,500 cubic metres (6.2 million cu ft), which was composed of such different materials such as fibre-cement, insulation and various metals like iron, stainless steel and copper. This disparity of composition represented a major challenge for the demolition works, since it is essential to separate these materials to make proper use of the waste for recycling.

Lastly, the hopper shed building, with a height of 50 m, demanded to be dismantled with large-scale machines. Additionally, dismantling work was carried out on the turbine of the generator set and the concrete bedplate, the building that housed it and the metal structures that connected all these elements to the thermal power plant.

All this work was carried out through the principle of selective demolition – separating the materials at source to minimise the production of waste deposited at landfills.

As a result, the preliminary cleaning of the plant was initially carried out, removing potentially polluting materials such as fuel, diesel, ashes and other power plant products. Furthermore, hazardous waste was extracted, especially asbestos, contained particularly in locations such as the boiler, the inner chimney stack seals or the cooling tower.

In terms of safety, the demolition of the Anllares Thermal Power Plant represented a major step forward for Lezama. Unlike Foix Thermal Power Plant, where no blasting with explosives took place, in this power plant demolition in Leon there were up to four blasts – silos, chimney stack, cooling tower and boiler – which eliminated the need for work at height and, using the appropriate procedures and ensuring the safety distance, the risk for workers was highly reduced.

Moreover, the use of long-reach and large-scale machines also guaranteed that workers were not exposed to work at very great heights. This was achieved due to the KMC 1200S long-arm excavator, by Japanese manufacturer Hitachi. 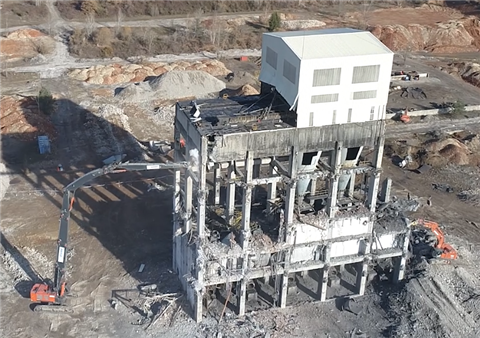 On this project, Lezama was working with energy company Naturgy. (Photo: Lezama Demoliciones)

The hopper shed was a reinforced concrete structure with sheet metal enclosure, with a height of nearly 50 m. It housed 12 coal silos inside, with a volume of 54,509 cubic metres (1.9 million cu ft)and it was the last building to be dismantled at the Anllares Thermal Power Plant, after demolishing the boiler. Its large size made it difficult to work with conventional long-arm machines.

Lastly, the introduction of new technologies in demolition projects also represents a step forward in operational safety. In the second half of the project period, Lezama acquired 3D vision equipment and a virtual platform from the company Ludus Global. This tool enables the persons in charge of worksite safety to provide workers with safety training, creating an immersive and very realistic experience with potential accidents in projects.

At the Anllares Thermal Power Plant we also sought to further develop the relationship between the client, the technicians and site personnel. Lezama Demoliciones considered it vital to build a relationship of trust with its workers for these to become involved in technical and safety aspects, both with the company itself and the client and the supervisory team.

By holding periodic meetings in which workers could provide their vision and relate directly to the client and the supervisory team, improvements in safety and prevention of risk situations were achieved.

Ultimately, the most advanced and safest procedures, machines with the longest reach and highest quality, and safety training that enables more realistic experiences guarantee the absence of onsite accidents, explained Isabel Lorenzo, safety and health coordinator at Lezama.

Technical director of David Peral added: “Blasting represented a major improvement process, since it offered greater performance both in terms of demolition and in the recovery of materials, and also reduced the risk for workers during the demolition of high-rise structures.”

The chimney stack had a diameter at the base of 13 m (42 m) and 7.35 m (24 ft) at the crown. It was made of reinforced concrete and internally lined with refractory brick distributed in 12 trommels, with asbestos seals, leaving an air chamber between the concrete wall and refractory brick wall. Dismantling the refractory brick lining turned out to be a major challenge from a safety standpoint. This task must be completed before blasting, as it is important to separate the material from the concrete to recover both resources.

First, to perform the blasting, the structural weakening work must be carried out. Directional windows were created to direct the fall and ease the removal of the material by creating a sponging site to prevent greater projection. Next, some cuts were made in the reinforcement to provoke the rupture of the mined zones. 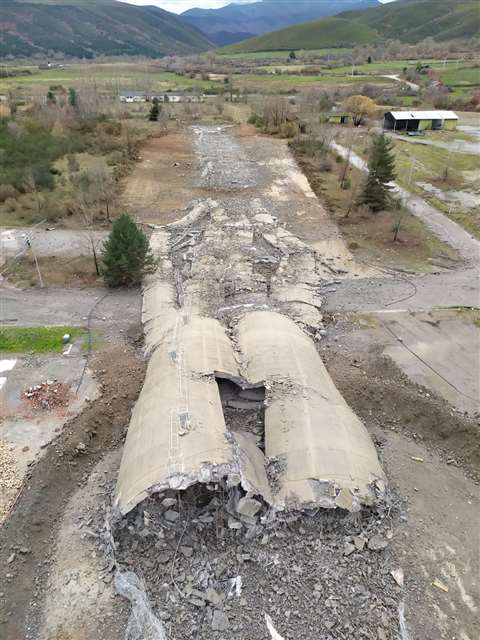 To this end, the horizontal reinforcements were cut on the outer blast side. Then horizontal cuts were made to reduce the resistance at the rear of the chimney and prevent it from impeding the directional fall thereof. Lastly, the gelatinous dynamite was placed along two-thirds of the perimeter of the chimney, forming a rupture wedge of decreasing height from 2.65 m (8 ft) to 0.6 m (2 ft).

Too cushion the fall of the chimney stack, a sand bed was placed on the fall position and water pools with explosives were also prepared. This made it possible to trap the dust that raised during the falling process. Thanks to this technique, the company was able to recover 3,500 t of concrete.

Demolition by blasting was also used on the cooling tower and boiler.

In the blasting of the metallic structures, linear cutting loads were used, which are specific explosives to cut the metal of the structures.

More than 110 pieces of equipment and chemical products of the facility were able to be reused. On the one hand, equipment such as soldering irons, drills and different tools existing at the plant were sold. On the other, equipment such as blowers, compressors or laboratory equipment were also managed. Furthermore, products such as sand, resins, active carbon, phosphates or descalers were not eliminated, but rather delivered for reuse to other entities such as educational centres and companies, where they could have a new life.