After more than 25 years’ experience in the sector and extensive demolition work on chemical plants, industrial buildings and civil works, Lezama Demoliciones faced a new challenge: the demolition of the old Foix Thermal Power Plant, located in Cubelles, Barcelona. 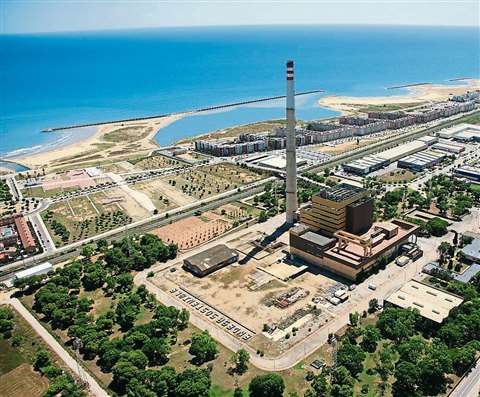 But the company did not know at that stage that the project that was to win the AEDED Prize, awarded by the Spanish Demolition, Decontamination, Cutting and Drilling Association for the country’s best demolition project.

The project, which started in 2017, consisted of the complete dismantling and demolition of the plant, which had been closed for almost two years.

Lezama also performed the preliminary cleaning and management of the waste from the operation of the plant, as well as removing other hazardous waste, including asbestos.

The work was divided into zones and the preliminary cleaning had to be approved before proceeding to demolition.

The turbine-generator was disassembled avoiding the use of cranes, which reduced risk. For the demolition of the building, the use of heavy machinery in the removal of the bedplate enabled rapid execution and the complete separation of materials. It was carried out under stringent dust and noise emission control measures.

“The most important was from a safety standpoint, since we faced the execution of a project of more than two years that was completed without any accidents. The work was executed with the maximum excellence in safety and environment. It is a pioneering project in circular and sustainable economy.” 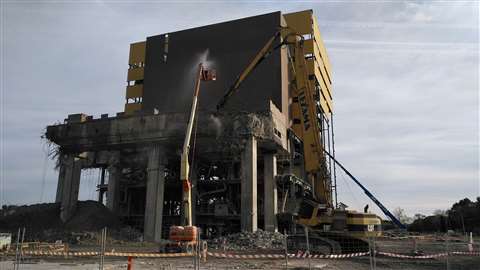 The nature of the project called on the use of innovative equipment. (Photo: Lezama Demoliciones)

To fulfil the deadlines set for the project, the project management team used innovative equipment, machinery and techniques. Remote controlled robots and long-arm machinery were used to demolish the chimney stack, in addition to combining manual and mechanical demolition methods in the metal and concrete structures.

“From a safety standpoint, we reduced the number of crane manoeuvres significantly using different long-arm excavators of various sizes, the largest having a reach of 35 m (114 m),” said David Peral, technical site manager of Lezama Demoliciones.

Using robots and long-arm machinery reduced the number of man-hours of risky work while enabling the complete segregation of waste from an environmental standpoint, removal of asbestos seals in the chimney stack and the interior refractory brick and the concrete from the shaft.

The impossibility of blasting was also an important conditioning factor for the project, as it required the work to be carried out using manual or mechanical means. This impediment was due to the proximity of a railway line, roads and the nearby urban area.

The height of the structures required many hours of work at height, but with stringent safety (it is a highly exposed zone, less than 200 m (656 ft) from the coastline) and project planning control, they were all complete without accidents.

“Apart from the chimney stack, the boiler was nearly 55 m (180 ft), and the turbine and ancillary buildings exceeded 25 m (82 ft),” added David Peral.

“Wind control (both in the chimney stack and on the ground) was stringent, requiring stopping certain work at height for safety reasons on many occasions. Monitoring was performed in real time.” 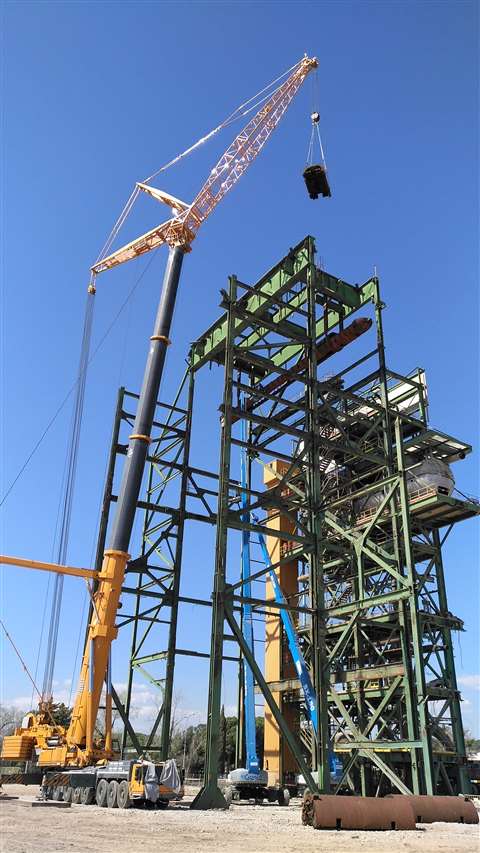 The structures required many hours of working at height, but with stringent safety considerations. (Photo: Lezama Demoliciones)

From the environmental standpoint, Lezama even had to adapt to peregrine falcon nesting periods.

“We had to adapt to the different existing circumstances, such as organising the different tasks and adapting them to respect the peregrine falcon nesting period,” points out David Peral.

“Also, the work was adapted to peak fire risk periods, given the woodland environment in one of the project sites and due to being in a particularly hot and low-rainfall zone.”

In addition to the natural environment, the demolition tasks had to be carried out on a site surrounded by very busy roads and railway lines and taking into account that it is a holiday area.

“There was dust and noise emission control during the course of the work to guarantee the smooth running of the entire process and its impact on the environment. All the monthly dust level controls fulfilled the legally established levels.

This was again achieved by means of adapted planning, avoiding dust-generating work on windier days, for example. Neither did noise-related incidents occur, with 100% of positive results in the controls carried out. Furthermore, water treatment processes and their reuse onsite prevented the need to make external water discharges.

For the demolition of the boiler, asbestos removal was carried out to ensure the safety of the workers and the environment.

As another of Lezama’s site manager, Diego Iglesias pointed out: “Tthanks to this project, the full restoration of the land was achieved after more than 40 years of operation of the thermal power plant. We implemented innovative, safe and environmentally friendly work methods, resulting in a pioneering sustainability and circular economy project”.