The last year has seen several significant demolition projects take place across the world. Following a reduction in jobs during the height of the pandemic, the number of projects taking place has returned to pre-pandemic levels.

Now, with other industries experiencing a prolonged period of normal working practice, demand for demolition services will likely increase, and many could require contractors to employ innovative demolition techniques to carry out work on some of the more challenging projects.

Having initially closed its doors in 2016, work on demolishing two chimney stacks at the Ferrybridge ‘C’ Power Station was finalised by British demolition contractor Keltbray last year via a controlled explosion, and took months to plan according to the company. 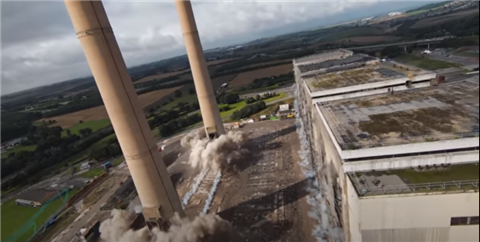 Footage from a drone captures the moment the stations were demolished. (Photo: Keltbray)

The 198 m high structures, the tallest on the site, as well as the main boiler house and bunker bay structure were demolished in what Bobby Ellis, senior project manager for Keltbray’s demolition and construction division described as a “major milestone in history.”

The former coal-fired electricity plant, which is based in Leeds in the North of England is owned by Scottish energy company SSE and produced electricity for 50 years prior to its demolition.

In March this year, SSE announced that final demolition works had been carried out on the site and it now plans to transition to low-carbon energy, in line with the UK’s target for net zero carbon emissions by 2050.

2. High-rise demolition carried out by Rosenlund

In April this year, D&RI covered a site report from Australia-based demolition contractors Rosenlund, who carried out the demolition of four high-rise buildings in the central business district area of Brisbane. 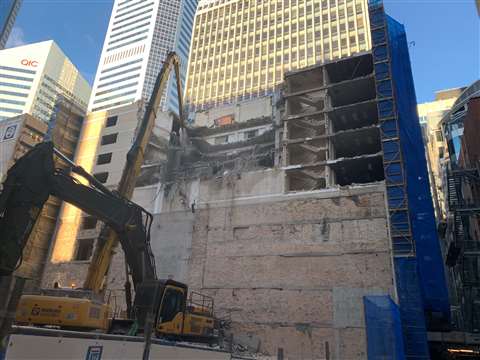 Rosenlund deployed a range of techniques to demolish the buildings. (Photo: Rosenlund)

According to the company, a range of demolition techniques were required to demolish the 60,000 cubic metres (2.12 million cu ft) of building, including craning, high-reach, top down and traditional demolition methods.

A Green Star rating required a minimum of 90% of the generated waste from the site to be recycled, and the company achieved this with a 96% recycling rate.

For its part in the project, the company were shortlisted in the Urban Demolition under US$10 million category of the 2021 World Demolition Awards.

The Kaserne building in Johannesburg was demolished in May this year after three fires ripped through the five-storey building in 2021, the last of which resulted in nine fatalities. Following the fires, local authorities condemned the building and assigned the demolition to South African demolition company Phoenecian. 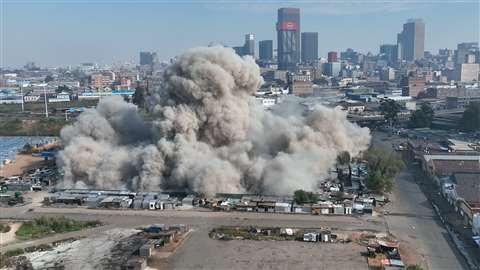 A number of fires had hit the building in 2021. (Photo: Phoenecian Group)

Using explosives, the company carried out an implosion on the structure, a method the company say is “well-suited for this type of pre-existing structure.”

According to Phoenecian, which also operates in the recycling sector, the building was taken down by 783 non-electronic detonators in four seconds.

Prior to the demolition, the company say that it took three months to carry out work to pre-weaken key structures as well as soft work. Following the completion of the project, the site will be redeveloped in to 1,500 low-cost housing units.

Demolition services provider Mann Group were called in to demolish nine silos at the Malt Silos in Melbourne, Australia.

The building was a local landmark for over a century and the demolition of it required the Victoria-based company to demolish the 45 m (147 ft) silos whilst ensuring that the remaining listed structures were not damaged. 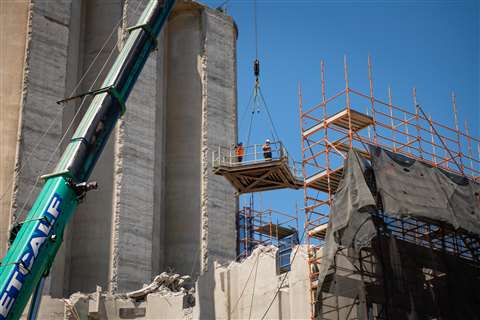 A feature of the Malt Silos project was special conditions relating to working platforms and crane boxes. (Photo: Mann Group)

To achieve this, Mann Group used demolition robots, custom made working platforms and anti-shock shelf angle brackets. To monitor the state of the heritage silos throughout the project, the company were alerted to any movement through several 24-hour vibration monitors with a back to base and text messaging system.

The project also required Mann Group to develop a circular economy stance on the brickwork. For this, 95,000 heritage bricks were collected and stored ready to be used when the site is redeveloped in the future.

Despite several other constraints, including reduction of noise level and road weight restrictions, the project was completed on time and within the specifications given to Mann Group.

Earlier this year, Casey-Bertram assisted a fire department with the removal of semi-truck trailers from a fire at a distribution centre in Indianapolis. 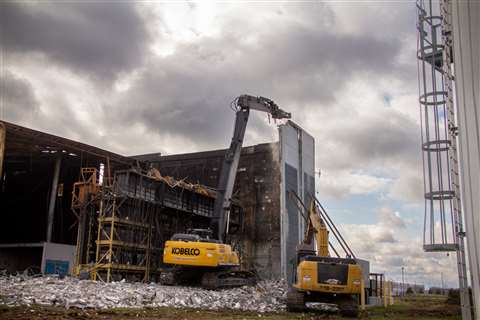 Casey-Bertram needed a high reach for the special challenges of the demolition. (Photo: Casey-Bertram)

Once the trailers were removed and the fire was extinguished, the building demolition services provider were asked to remove two pre-cast panels. This posed challenges for the company in two areas. Firstly, the height of the 14.3 m (47 ft) structures caused access issues.

Secondly, they were both situated within 9.1 m (30 ft) of utility systems that supported a nearby distribution centre with over 1,000 employees. To overcome the height of the panels, the company deployed a high reach excavator, the Kobelco SK300 with a 15 m high reach front and a LaBounty multi-demolition processor (MDP 20R) from Company Wrench)

The company used the SK300 to crush the top concrete segments of the panel, while the buckets from a CAT 330 and two Komatsu PC300s supported and repositioned metal bracing that ensured the panels would collapse as planned.

The project is the first phase of demolition on the site, and future works to remove one mile of panels is expected to be an easier process. 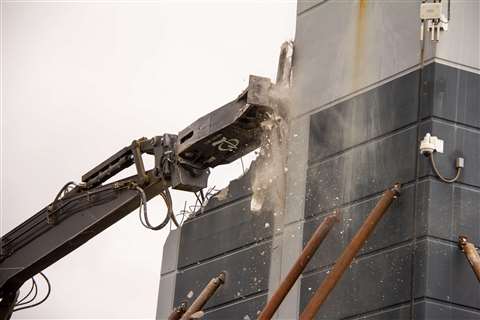 The challenges of a high reach demolition
When a US contractor needed a high reach excavator, it contacted Company Wrench 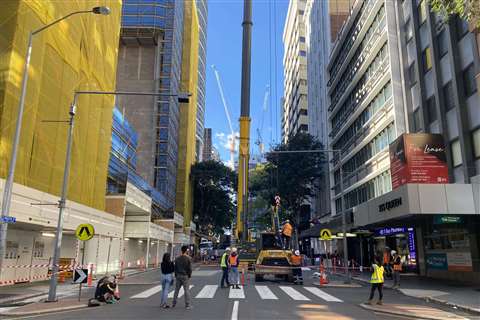 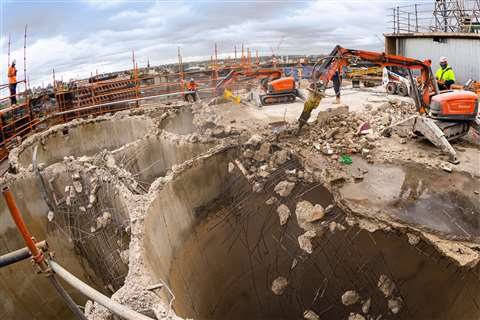