Liberty Industrial was engaged to plan and execute the demolition of a wind turbine that had suffered a significant structural failure. 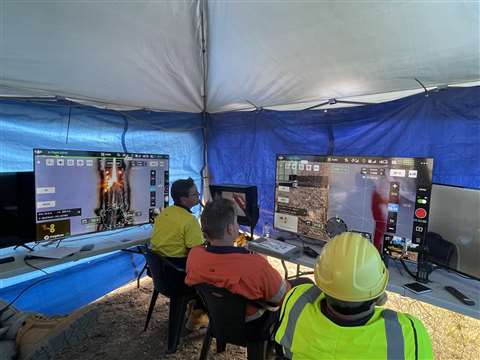 As it presented a high probability of imminent structural collapse, an exclusion zone of 400 m (1,312 ft) was established and no personnel were permitted entry.

This remote demolition project involved an unprecedented amount of planning, technical and engineering analysis, collaboration with specialists from around the world, and field trials to develop and perfect the methods.

A method was developed that used remotely operated vehicles (ROVs), drones and specifically designed cutting charges to overcome the challenges imposed by the exclusion zone.

The ROV was used throughout the project to not only place the explosives on the turbine structure but to undertake the preparation cuts using an oxytorch to complete the required pre-weakening.

Extensive work went into the design of the explosives used in the execution to ensure that the charge was within the lifting capacity of the ROV, whilst also having the capacity to cut through the 52 mm (2 in) thick steel.

The Ninian North offshore production Topside that was situated in the North Sea was removed in a single lift from its supporting structure and platform transported to Shetland where it was skidded ashore for final decommissioning.

Previously the demolition of structures of this type has been to cut sections and pull them to ground level using the controlled collapse method or cut sections and lift them off using cranes. Shetland is known for its inclement weather with regular wind speeds higher than those permitted for safe crane operations.

Dropping the whole Topside to ground level where it could be demolished using large excavators equipped with shears was agreed.

The benefits where it would greatly reduce the risk of men working at height, an accurate schedule for the work could be provided as the risk of costly unknown standing time due to cranes being winded off would be avoided.

The selected option was to “topple” the whole Topside sideways using explosives so that the main beams of the rig deck did not impact directly on top of the support shoes and damage them.

To achieve this pivot points were required at the east sides of the bottom of each leg and at the west side of the top of each leg.

These pivots were formed by initial flame cutting and completed using a combination of cutting charges and kicking charges.

The project was completed on time and within budget with no health or safety issues. 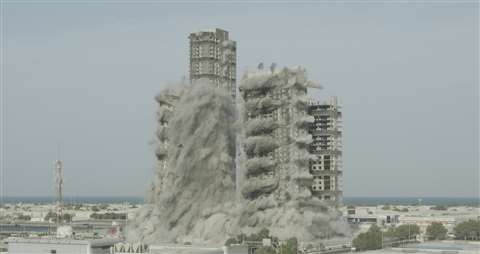 International explosives engineer, Safedem, carried out the blast design, specification of preparatory works, and the installation and initiation of explosives.

Mina Plaza – a massive concrete complex consisting of four towers (50, 38, 38 and 27 storeys in height) built upon a nine-storey podium – posed a series of engineering challenges to the Safedem team.

The Safedem engineering team went to work with extensive structural analysis and site investigations, leading to a blast design backed by detailed calculations. That precision in design would ensure the integrity of the structure through the preparatory works and ultimately guarantee a safe and successful collapse mechanism when the explosives were initiated.

Safedem appointed Applied Science Inernational, who constructed a detailed model and simulation of the collapse of the combined towers which was used to validate Safedem’s design in advance of demolition.