The list of challenges was stacked against the project team however, following the pre-tender works carried out by C&D the following challenges were overcome:

There was also a children’s nursery located just 2 m (6 ft) from the tunnel entrance that would need to be used to remove demolition materials on the cable car scheme along with the main swimming pool demolition.

Despe/ERM
Country Italy
Project Exxon Mobil Refinery – Notre Dame De Gravenchon – Block 201
Client Esso Rafinage/Exxom Mobil (EP&S) Division
ExxonMobil operates a large refinery near the Normandy coast of France. One of the original 1930s structures was a steam and power plant containing four boilers/economisers and two turbine sets. The power plant had been non-operational since the 1990s but was located next to operating refinery assets. It required decontamination and demolition. 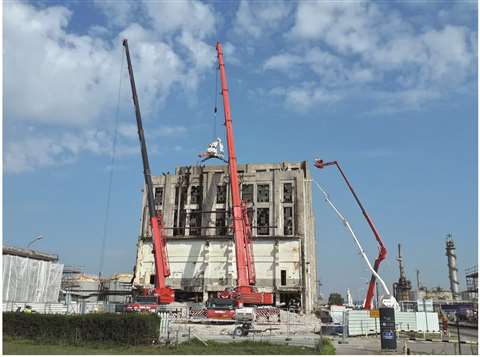 To visualise this, the main boiler house was like a big reinforced concrete box with four old boilers inside, full of asbestos, with all high-level areas in poor condition or inaccessible – 20 m (65 ft) to the east there was an operating oils production plant so no dust could be created and 10 m (32 ft) to the west there was a laboratory where no vibration was allowed.

In one year of work, in this abandoned power station within an operating refinery, the main boiler house with four boilers, a turbine room, pump house and two cooling towers were demolished.

Erith Contractors/Inovyn
Country United Kingdom
Project Inovyn, Runcorn – Framework
Client Inovyn
Following the success of Erith’s initial project at Inovyn, the asbestos removal, decontamination, deplant, dismantling and site clearance of the chloromethanes facilities and an intensive qualification process, Erith has been appointed to a 10-year framework to carry out decommissioning across the strategic site in Runcorn. 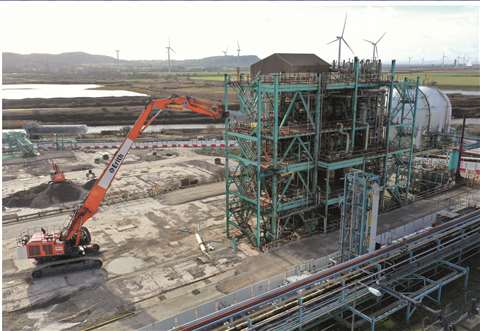 Projects carried out in the past year have included the removal of assets in the Western Point Power Station pump house, involving the use of specialist divers to remove the redundant drum screen and platforms that were located underwater, the demolition of the waste brine treatment plant and the Weaver stock sheds, and the removal of mercury cells from J Unit.

Flesan
Country Chile
Project Demolition of 7b Infiernillo Phase Infrastructures
Client Anglo American Los Bronces
The demolished building, located in the Los Bronces Mine of Anglo-American Chile, it was built mainly in metal and concrete. Due to the coming winter season the Andes, controlled demolition through explosives was chosen.

Due to the high demands of Chilean mining, an alliance was formed with Jet Demolition to work with high worldwide standards and with Enaex in relation to special procedures to obtain permits.

Due to the power supply substation close to the mine, a thorough calculation report was developed. Previous work from blasting was performed, along with possible risks assessments and safety and environmental mitigation measures.

Before detonation, only structural columns and beams were left, removing all lightweight structures in front of the building.

An impact containment absorption system was installed along with geotextile to avoid particles and elements.

Finally, everything turned out according to plan, without incidents or accidents.