Steinexpo on an upward curve

Visitors to the recent Steinexpo exhibition in Germany topped 50,000 for the four days – a 12% increase on three years ago. 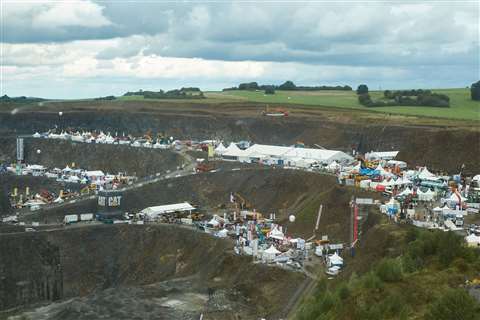 Part of the Steinexpo show which attracted more than 50,000 visitors to the MHI quarry in Germany

The final total was 53,890, with the total exhibitors and the number of companies from outside Germany also both up on 2014.

“It was the most strenuous Steinexpo that we have ever organised,” said the show’s managing director Friedhelm Rese.

“But, at the same time, it was also our most successful fair. I would like to thank all of the exhibitors, for their abiding trust in our exhibition concept.

“And I would like to thank the visitors for their interest in and attention to our offer, which is unique on the European continent.”

Visitor numbers included 400 schoolchildren aged between 12 and 16 who were invited by German construction equipment trade association the VDMA as part of the Think Big initiative to attract more young people to the industry.

“The effort that goes into the competition for newcomers is immense, especially among technical disciplines,” said managing director Joachim Schmid.

“The VDMA and member companies must invest a great deal, so that the industry represented at Steinexpo is perceived as an interesting employer by young people.”

The association also used the event to report a 20% growth in the turnover of construction equipment manufacturers worldwide during the first six months of 2017.

The show returns to the MHI Quarry at Nieder Ofleiden in 2020.