Stefano Panseri, CEO of Italian contractor Despe, has finally taken up the presidency of the European Demolition Association (EDA) following an emotional and historic night at the association’s convention. 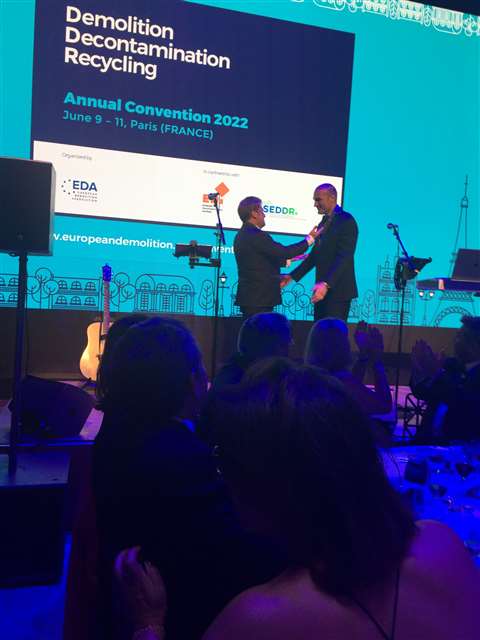 The change had already been delayed due to Covid-19 making an in-person convention impossible, with Stefano’s predecessor Francisco Cobo staying on in the role until the formal handover could take place.

In becoming president, Stefano follows in the footsteps of his father Guiseppe.

This is only the second instance of a father and son holding the post – at the same time as Scott Homrich has followed his late father Roger to become president of the National Demolition Association in the USA.

Stefano told the audience at the convention’s gala dinner in the Eiffel Tower that he would do his best to serve them as EDA president.

At the same time he joked with members of his family, who were also present, that they would be facing a much bigger workload during the next three years.

It was also announced from the stage that Patrick Frye, managing director of France-based demolition contractor Cardem, would be the EDA’s new vice-president.

This made it a double celebration for Cardem, whose long serving director Alberto dos Santos –associated with the company for 35 years – was inducted into the EDA’s Club of Honour.

Also joining the Club of Honour is the EDA’s immediate past president Francisco Cobo.