SBM Mineral Processing, part of the MFL Group, recently welcomed a total of 19 dealers from 14 countries – including numerous new partners – to the official launch of its new Jawmax 400/450 jaw crushers and the newly introduced Remax 450 impact crusher.

The venue was the MFL Group’s main plant in Liezen, Austria, which is also home to the production facility for SBM’s growing range of track-mounted crushing plants for recycling. 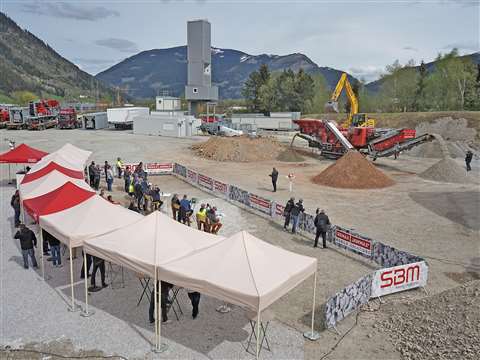 The extensive testing area at the Liezen plant offered space for an almost complete presentation of the SBM programme of track-mounted jaw and impact crushers, which has meanwhile been expanded to a total of ten standard models with operating weights between 30 and 60 tonnes. Also on display were various semi-stationary processing solutions and the company’s successful concrete mixing technology.

However, the focus was on performance-oriented demonstrations of the fundamentally redesigned Jawmax 400/450 series and the Remax 450 impact crusher, based on the Remax 400 model introduced in 2018.

The common feature of both new 450s is a pre-screening unit that effectively separates contaminated or valuable material, which is said to reduce crusher wear while noticeably improving the crushing result in terms of quality and output.

The new double-deck pre-screen is designed as a circular vibratory screen and is directly connected to the vibrating chute in the feed hopper. Via a triple flap on the screen run, the two fractions can be discharged in full or in part as fines or added to the end-product as crusher bypass. 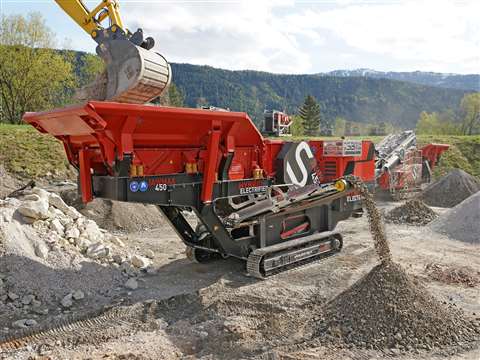 The Jawmax 450 on show at its official launch

Compared to the double-deck grizzly feeders of the 400 models, the pre-screen increases the hourly capacity by about 50 t/hr to a maximum of 450 t/hr.

“We are initially concentrating on Europe with the large central and northern European core markets and the neighbouring growth regions in the Mediterranean area and Eastern Europe,” said Helmut Haider of the MFL Group.

“In a next step, we want to really gain a foothold in the highly competitive British market and then turn our full focus to North America. There, we have already been able to place an initial population of around 20 mobile units in Canada, including our own aftersales structure,”