A German demolition and construction company has used Kemroc equipment to make safe a retaining wall 6,000 sq m (64,560 sq ft) at a pit excavated near Stuttgart. 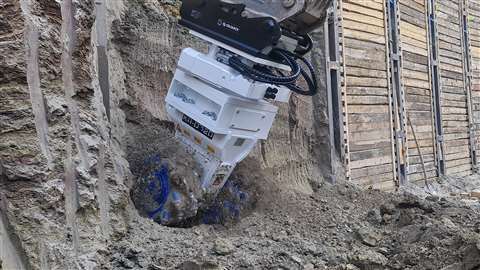 The Berb company (Bantle Entsorgung und Rückbau or Disposal and Demolition) used a drum cutter attachment with rotation unit from Kemroc – mounted on a 26 t excavator – so the walls could be cut back to allow wooden planks to be fitted between girders.

The situation came about when the developer, an electrical appliance manufacturer, decided to replace its manufacturing centre with a modern building.

After demolishing the original structure, Berb took on the task of removing the basement, including the concrete foundations, which created the pit.

This was achieved by using a KRD 120 (120 kW) drum cutter with a KRM 60 rotation unit, mounted on its own crawler excavator.

Installation of the shoring system (also known locally as Berlin shoring), requires double-T steel girders to be rammed into the ground at regular intervals and then wooden planks are used to fill the space between the girders.

To create space for the shoring, the soil is normally removed using an excavator with bucket. However, if the bucket removes a large boulder, voids are left behind the shoring that need to be backfilled.

To avoid this, it was decided to try the new method using an excavator with a rotary drum cutter attachment. In this way, flat, straight walls could be cut into the stony soil material without breaking out large sized pieces that would later create voids behind the wooden planks.

The KRD range of rotary drum cutters, described by Kemroc as a relatively new addition to its excavator attachments, comprises nine sizes available for excavators from 0.5 to 50 t operating weight.