British demolition contractor Keltbray has taken down the last of the cooling towers at the Ferrybridge ‘C’ Power Station in the north of England, to complete a three-year project.

Three cooling towers were brought down at the former coal-fired power station in West Yorkshire, which the owner SSE closed in 2016. 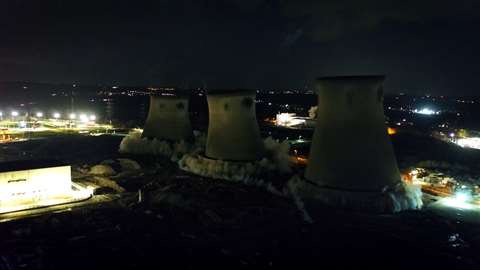 Keltbray took down the last of the cooling towers during a night-time demolition on 17 March. (Photo: SSE)

The power station produced electricity for over 50 years.

Keltbray carried out the blowdown last night on the night of 17 March using controlled explosives, with a local exclusion zone in place to ensure safety.

“The demolition project has been a significant undertaking and this event represents the culmination of years of planning,” said Paul Hook, SSE Thermal’s project manager for Ferrybridge ‘C’.

“For the Ferrybridge community, it is another poignant moment with the power station having played a vital part in so many people’s lives. However, it is important that we move towards a low-carbon future to meet our net zero targets.

“For the final blowdown at the site, we engaged closely with local residents, Wakefield Council, West Yorkshire Police, the Highways Agency and the Civil Aviation Authority to ensure a safe and efficient demolition.”