While other companies wondered how to find a way ahead through the Covid-19 crisis of early 2020, German excavator attachment manufacturer Rokla and its managing partner Robert Piasecki already knew.

Two years later, the evidence is there in the shape of a new factory in the Baden-Wurttemberg town of Langenburg. It took 12 months from planning and opened in 2021 as the company announced its new international rock.zone brand. 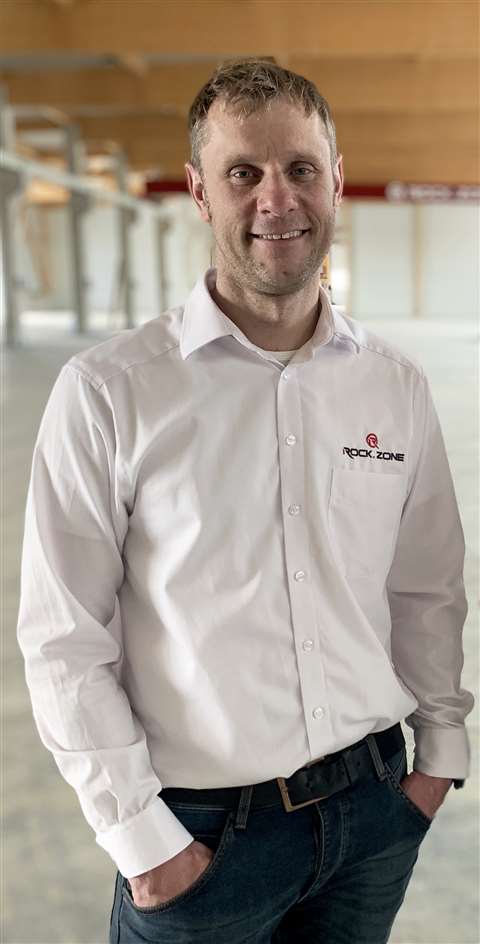 With 5,600 sq m (60,000 sq ft) of space, it is more than five times larger than the previous facility nearby, creating economies of scale that have enabled the company to save more than €500, (US$495,000) in material costs despite price rises of 30% pre-pandemic levels and in some cases two or three times what they were before Russia’s invasion of Ukraine.

While supply chain issues have wreaked havoc across the globe, Rokla has used suppliers within its own country wherever possible. Two of them – the welding services and paint shop providers – are within walking distance of the new site.

Robert’s take on all this is simple and straightforward

“We built the new building during Covid,” he says.

“It was a case of pushing ahead when we could not travel anymore.

“The new building has given us the capacity to build 1,500 machines a year, and with the demonstration area that we have, we are able to receive client visits every week.

“It is also carbon neutral, which is very important to us.”

Increased turnover during the Covid years

However, this decade has been about more than battening down the hatches while trying to future-proof the business. In terms of sales and turnover, for Rokla the Covid years have been successful in their own right.

“We have done very good business in the past two years,” says Robert.

The acqusition of Hartl

Branching out is nothing new to Rokla. Originally best known for rotary drum cutters, in 2019 it acquired Austrian crusher and screening bucket specialist Hartl.

At the time, Robert said: “The market for Hartl’s product offering has developed well in recent years and this acquisition promises to further strengthen Rokla’s position as a leading supplier of excavator attachments.

“Our products are particularly complementary, making the rationale behind the deal even more compelling for customers.”

Today, Hartl crushers or screens – which were rebranded as Rockcrusher and Rockscreener last year – account for around half of Rokla’s German turnover and a third of its revenues worldwide.

“It has been a successful implementation,” Robert concludes.

How the dealer network has developed

Locally, Rokla has been recognised with a business start up award from the state government in conjunction with Baden-Wurttemberg L Bank. The awards are for companies under 10 years old, making around 500 businesses eligible. Rokla was chosen in the machining and construction category; it can only win the award once and it is valid for two years: “It shows us as an example for other companies,” says Robert.

At the opposite end of the scale, Rokla’s international presence now covers 85 countries, with a quarter of its dealer network on an exclusive basis.

“I would love to have more dealers,” is Robert’s view.

“We need multiple dealers even for the smallest states in Germany. We have some exclusive dealers in the USA – every dealer wants to be exclusive but if they don’t order a container full of machines every month what’s to stop me going elsewhere?

“We need more dealers in China and India as well. But then the whole world has huge potential.”

Behind the apparent numbers game, the sales ethos is very different.

“The biggest competition for us is the use of the hammer, and the biggest challenge for a potential dealer is trying something new. All attachments are responsible for environmental sustainability.

“We will look at which machines they have, and look for signs that they are about quality and not just pushing through the price.

“We want to make a good sale, a reasonable sale, rather than a fast one. It is better for the long-term relationship. So I ask: ‘What can I do better for you?’

“Selling the same number of units to several smaller companies is preferable to selling them to one large one, so I don’t say ‘replace the hammer’. What we are offering is additional to the job site need.

“In a perfect world, the job site will take a crusher and screener as well. Then, instead of 100 vehicles, you only need five.”

Having put the factory in place, and with the dealer network growing, the next phase is a targeted growth of the product range.

“We do need more products and a wider range,” says Robert.

“But we do not want to have something for the sake of it. We want different styles of screener.

“And we have the smallest cutting units in the world, so we would like to have the biggest ones as well.”