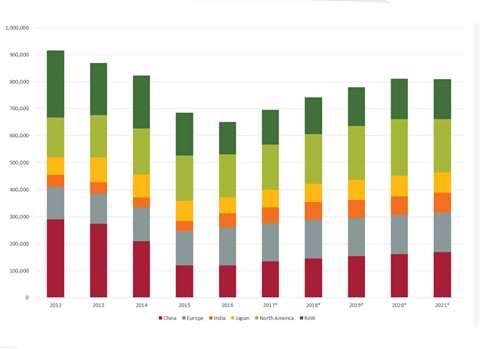 Global sales of construction equipment are expected to increase 7 percent this year, according to preliminary figures from specialist market intelligence and forecasting company Off-Highway Research. The number of machines sold in 2017 is expected to reach 695,142 units worldwide, compared to the 650,133 pieces of equipment sold in 2016, which represented the bottom of the industry’s economic cycle.

David Phillips, Managing Director of Off-Highway Research said, “Sales of construction equipment last year were affected by weak economic growth worldwide and low global prices for many commodities. These factors had a knock-on effect for the demand for most types of machinery, particularly equipment used in mining and other extractive industries. However, with commodity prices rising as 2016 went on, sales picked up in a number of key markets.”

Of particular significance this year is the expected return to growth for the Chinese market, which bottomed-out in 2016 after five years of steeply falling sales. However, even with the 13 percent rise in sales forecast for 2017, demand in China will still only be some 30 percent of what it was in the boom years of 2010 and 2011.

Meanwhile, the robust Indian market is forecast to go from strength to strength. Equipment sales grew a remarkable 40 per cent last year thanks to increased investment and a pick-up in project implementation in the country’s infrastructure market. This is expected to drive consistent and steady growth in Indian construction equipment sales for the next five years, and as the industry matures India could emerge as a significant regional manufacturing hub.

Meanwhile, the mature markets of Europe, Japan and North America suffered a 3 percent fall in sales last year, with factors such as uncertainty in the run up to the US presidential elections and the UK’s Brexit referendum harming business confidence. Growth is expected to return this year, particularly in Japan and North America, while the outlook in Europe is for a flatter market.

The long-term outlook for the global construction equipment market is for a period of moderate growth, which should see sales rise from the low point of 650,133 units in 2016 to around 810,000 machines being sold in 2020 and 2021 – a 25 percent increase in total.

In value terms, the market is expected to rise 28 per cent over the same period, with sales increasing from US$69.8 billion in 2016 to US$89.3 billion in 2020. This reflects an expected resurgence in some higher value types of equipment over the coming years, most notably crawler excavators and rigid dump trucks.