Cat dealer Cleveland Brothers Equipment Co has supplied what it describes as a “one-of-a-kind” excavator to a major US contractor. 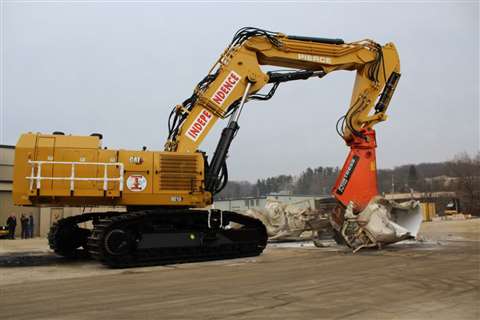 The company – which covers parts of Pennsylvania, West Virginia and Maryland and has been in business for 75 years – has provided a Cat 6015 to Ohio-based Independence Excavating.

Also included are a Fortress 145FS Series mobile shear, and a custom-designed and built Pierce Pacific three-piece boom/stick, forming a package that will tear down, wreck, cut and process harsh materials in the most difficult to reach places.

“This machine produces over 300 gallons per minute in hydraulic flow at the end of the stick, resulting in a 10-second cycle time for our shear,” said Ryan.

“Its performance is impressive.”

This build concept was crafted with the demolition of decommissioned power plants and steel mills as it’s intended use, and the machine will be used in projects across the USA.

“The Independence Excavating team is excited that we were able to work with Cleveland Brothers to build this.

“Pushing the limits of the machine through innovation is how we set ourselves apart from other demolition companies.”