Attachments – Ready for the next challenge

Despite Covid-19, the demolition and recycling attachments market is still in a good place. That is the view of Gordon Hambach, global business manufacturer for hydraulic attachment tools with German specialist manufacturer Epiroc, which ended the year with the launch of new products and a shortlisting at the 2020 World Demolition Awards.

“We are seeing more and more attachments used all over the world and superseding handheld equipment step by step,” said Gordon. 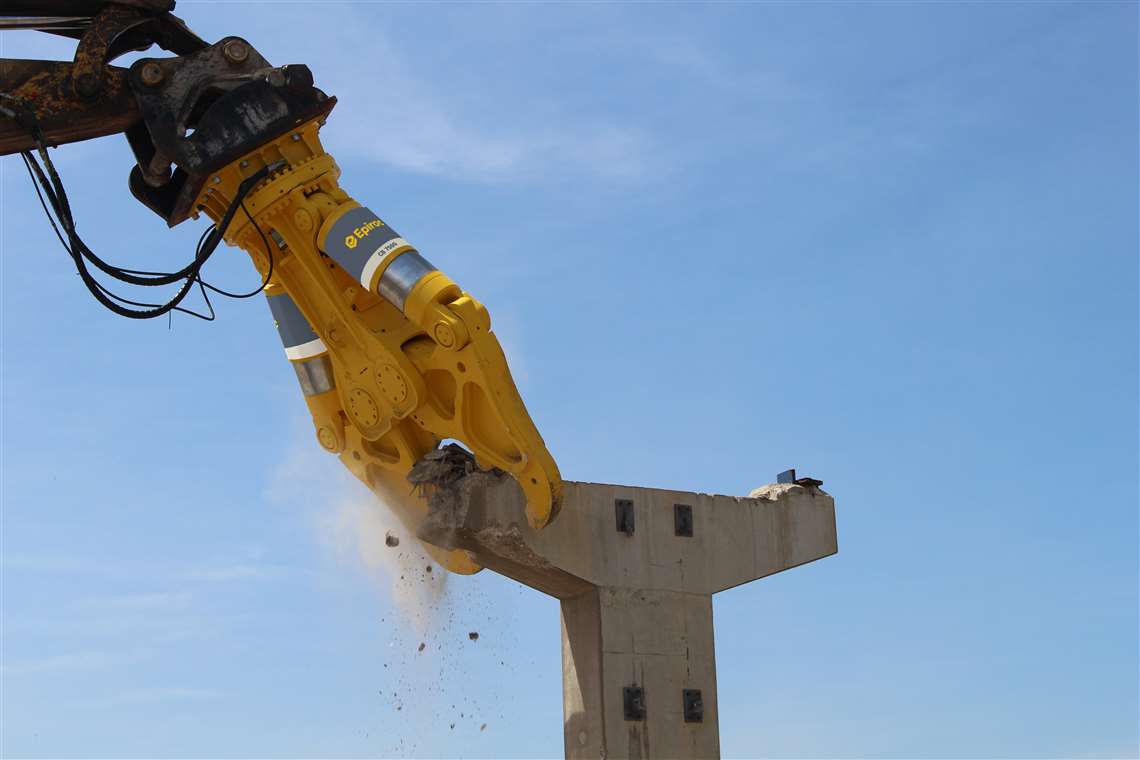 “Of course, last year, Covid-19 certainly had an impact and global supply chains were affected during the first lockdown in the spring.

With many unexpected changes taking place during 2020, Gordon said that Epiroc tried to stay as close as possible to its customers and business partners.

Breakers have remained the most popular hydraulic driven attachments: “They are all rounders and can be used in various industries, but we can also see increasing demand for drum cutters, compactors and pulverisers.”

While the demolition industry continues to present new challenges to Epiroc, in terms of regulations governing urban areas, its main product development in late 2020 was based on the more fundamental requirement of breaking up large concrete structures.

The company added two mew models to its CB Concrete Buster range, in the shape of the CB5500 and CB75000 designed for carriers in the 50 to 85 t weight class, adding that their comparatively light weights are effective choices with high reach or long front carriers.

Remote monitoring with Epiroc’s Hatcon device
Epiroc has also introduced Hatcon, a remote monitoring device for breakers and drum cutters that keeps track of location and operating hours. The cloud-based My Epiroc notifies customers about service, creates task lists and provides an overview of the entire fleet. It was this that product that earned Epiroc a World Demolition Awards shortlisting in the Manufacturer Innovation Tools and Attachments category.

“The Concrete Busters are aimed at the major demolition markets in the world, predominantly Europe, North America, Australia and Japan, but there is also increasing demand in other markets,” said Gordon.

“Hatcon is for everybody that wants to control and monitor large fleets, like in the rental industry, or faces long distances, or is simply curious to know more about the equipment operation and the data behind that. This is basically where we see the major needs for our developed solutions.”

BPH Attachments to sell LaBounty range in Britain and Ireland
Leading manufacturer LaBounty has selected BPH Attachments as its nominated dealer for the United Kingdom and Republic of Ireland.

The main focus for BPH will be LaBounty’s MSD range of steel shears.

The LaBounty demolition and scrap shears will sit alongside the extensive range of products from BPH, which is the sole importer to the United Kingdom of Prodem attachments comprising 20 products from hydraulic hammers to mini crushers for demolition and construction applications.

In recent years, Prodem attachments have been used in some of the most high-profile demolition and constructions projects, including the M20 and M23 smart motorways upgrade, Crossrail and the Hams Hall power station.

OilQuick’s ‘natural step to meet demand’
OilQuick has also been expanding in Great Britain, and says that interest in its quick couplers has grown steadily over the years. Having developed its OTQR-E tiltrotator, and previously being represented in the United Kingdom only by dealers and distributors, it started a British subsidiary last year. OilQuick UK is managing direct sales, marketing and service, as well as expanding its dealer and service network.

“This is a natural step to meet growing demand,” said Henrik Sonerud, CEO of OilQuick in Sweden.

The HB03, one of five new breakers from Doosan Infracore Europe

The new five-breaker range HB-series breakers is specifically optimised and fully certified for Doosan excavators with carrier weights from 1.2 to 15 t.

Doosan said the service life of the breakers is extended through the adoption of an advanced heat treatment process and quality proven materials for key components including the cylinder and piston.

The energy of the piston stroke is accumulated by charged nitrogen gas and the breakers use an inward valve system with a simple structure and fewer inner parts.

The low noise housing is also said to be ideal for urban work, where noise levels must be controlled or where local regulation may require silenced breakers.

Switching between attachments with Caterpillar
Caterpillar has introduced its Hydraulic Connecting S Type (HCS) couplers, which the company says allows users to switch between hydromechanical attachments and be fully operation in a matter of seconds without the operator leaving the cab. 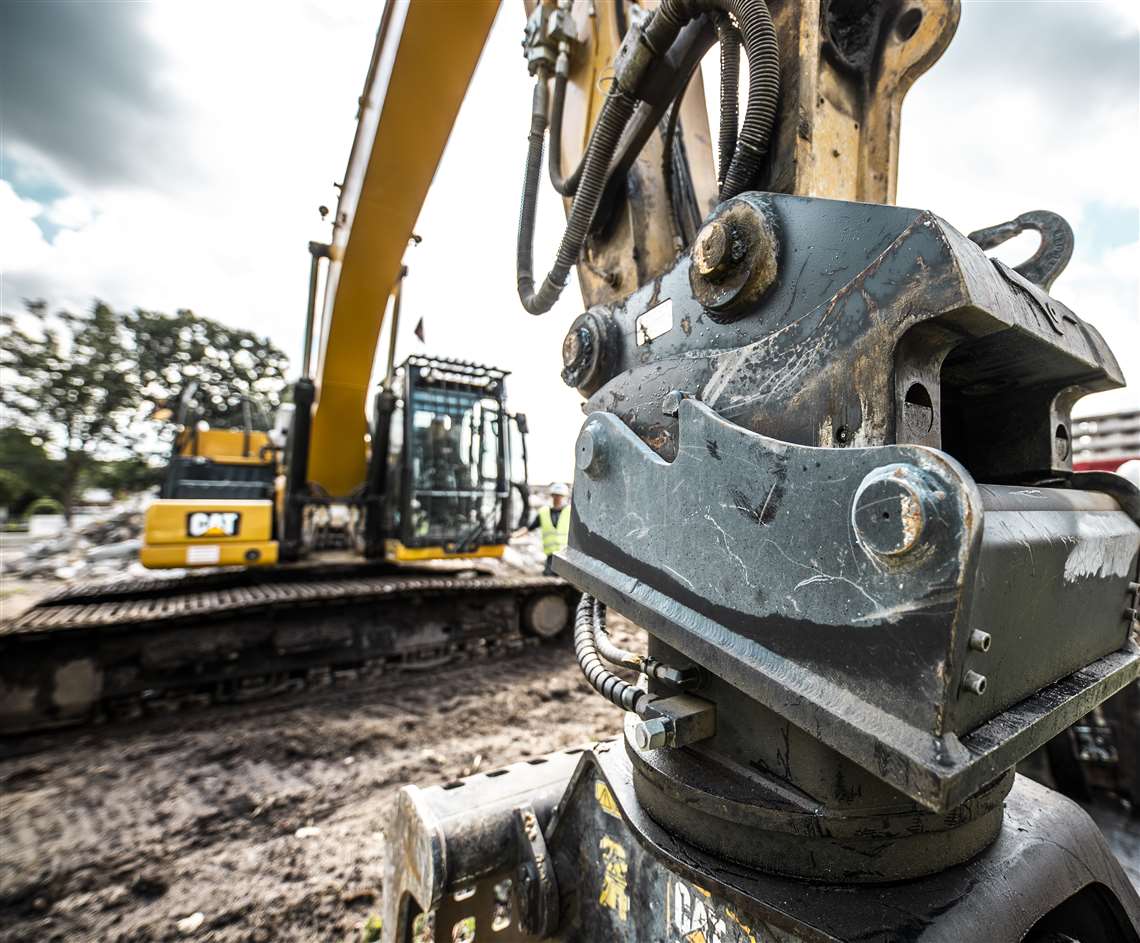 Excavators of similar sizes can share attachments, with HCS couplers covering a range of machines from 311-340 tracked and M314-M322 wheeled excavators.

According to Cat, the couplers are designed for high-flow performance suited to hydromechanical tools in demolition and city earthmoving applications, with the lower hydraulic restriction said to result in better machine fuel efficiency.

Trevi Benne shears and pulverisers
A former school in Italy is being turned into a supermarket after a demolition and reconstruction project featuring attachments from Trevi Benne alongside Doosan and Hitachi excavators. Contractor Rad Service completed demolition in late 2020 and the new building is expected to be ready in November of this year.

Inan Makina offers a range of attachments and has more than 80,000 sq m of manufacturing space

It now provides solutions for customers with grapples, crushers, compactors, augers, stationary booms and special design attachments to meet the demands of the demolition and earthmoving applications.