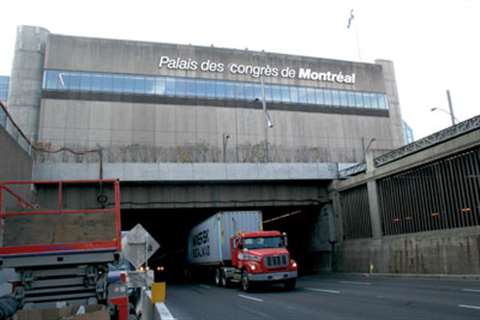 The Ville Marie Tunnel on Highway 720 in Montreal, Canada is being refurbished

An Aquajet HVD Evolution, the first such unit to make an appearance in Canada's eastern provinces, is being used by main contractor GTS during the refurbishment of the Ville Marie Tunnel on Highway 720 in Montreal, Canada. The 3 km (1.9 mile) long tunnel was opened in 1974 and is a mix of three, four and five lanes along its length. It is a key east-west traffic artery across the city with more than 100,000 vehicle movements a day. This requires that any disruptions to traffic flow are kept to a minimum.

GTS is replacing 1 km of concrete on both sides of the eastern portal immediately below the Montreal Palais des Congres and close to the downtown Jacques Cartier Bridge. The concrete is being removed to a depth of 125 mm (5 in) to expose existing rebar. New rebar is then added for additional strength, with a further additional 100 mm (4 in) of concrete to give a total new depth of 225 mm (9 in).

Work commenced in August 2009, with work commencing on the slow lane tunnel wall that is expected to be completed by the end of this month (March 2010). The completion date for the fast lane wall is expected to be October 2010. Work is being carried out with the tunnel still open to traffic, requiring that the Evolution unit be protected by a frame and positioned on a telescopic handler to allow it to work up to 15 m (50 ft) up the tunnel walls.