Award winner Cantillon gets its hands on the trophy

United Kingdom-based demolition contractor Cantillon was not alone when it won a World Demolition Awards category but was unable to collect the trophy.

Like many successful entrants across Europe, the company was affected by the travel restrictions between their homeland and the USA, which hosted the World Demolition Summit, and had to settle for making an acceptance speech by video or asking someone else to go on stage on their behalf. 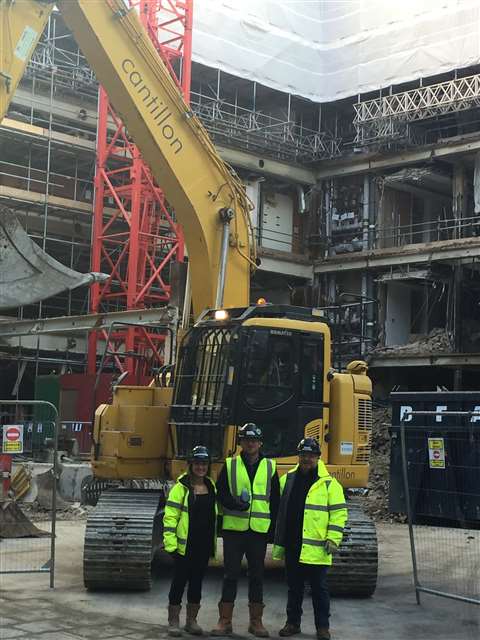 D&Ri editor Steve Ducker decided that if Cantillon couldn’t get to the awards, the award would come to them. So he headed into central London to present the trophy to the winning company.

The Blossom Street project that won the award concluded in April, so the trophy handover took place at another job site in the capital.

Cantillon managing director Paul Cluskey said: “We were thrilled to secure the World Demolition Award in the Urban Demolition over $10 million category for our work at Blossom Street, delivered on behalf of British Land.

“Blossom Street was an incredibly complex and unique project with 18 buildings spread over six plots. Each building required a unique demolition, salvage or retention solution, delivered with a number of significant constraints including its proximity to the mainline track into Liverpool Street, the archaeological and Historic England interests as well as a scheduled ancient monument situated in the heart of the site.

“This was one of the most challenging demolition projects undertaken in London in recent memory and was delivered incident and accident free. It is fitting that the project has secured this award in recognition of the incredible team effort that made the project such a success”

The next awards will be at the World Demolition Summit 2022, taking place in Vienna, Austria, on 16 and 17 November.