Petrochemical manufacturing giant Sabic and engineering consultancy RVA Group have marked a decade of decommissioning works completed together, at the operator’s Wilton and North Tees sites in Teesside, United Kingdom. 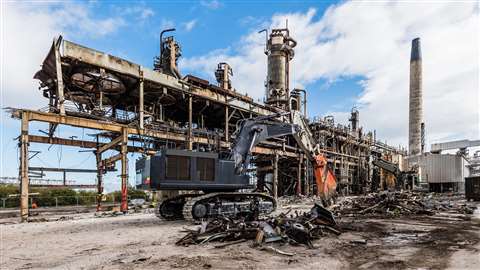 The RVA Group and Sabic have worked together for 10 years decommissioning petrochemical sites in Teesside, United Kingdom. Photo: RVA Group

The projects – at sites located in the north east of England – represent over 1.2 million safe hours worked on the demolition of 10 plant areas spanning more than 54 hectares (133 acres), or 134 football pitches.

Assignments have included the demolition of the two largest distillation columns in Europe – at 110 m (360 ft) high – plus an additional 25 columns, and three chimney stacks reaching up to 125 m (410 ft).

One hyperbolic and ten package cooling towers have also been cleared, along with 50 furnaces, six spheres and more than 100 storage tanks. Early in the project, the team demolished a jetty on the River Tees too – a notable location and focal point of environmental consideration, as the Teesmouth National Nature reserve is a Site of Special Scientific Interest (SSSI) and is home to protected bird and river species.

Despite the complexity of this vast undertaking and the sheer volume of work carried out since the relationship began back in 2012, RVA said the project has remained on track and has been delivered under budget.

“This has been an intricate, extensive, and high-profile demolition programme – part of Sabic’s investment in ‘fit for the future’ operations,” said RVA operations director Matthew Waller.

We have continued to sequentially remove redundant plant from their footprint to pave the way for their ongoing manufacturing excellence, and it has been a privilege to support them over the course of the last ten years.”

Sabic senior demolition manager Keiron Mulholland added: “The focus for this entire project, has been safe execution, by design. Detailed planning and expert decommissioning engineering have been the foundations for the safe delivery from start to finish – no mean feat given the inherently high-hazard nature of the works and the sheer number of hours invested into the programme.”

A total of almost 60,000 t of scrap have been salvaged for reuse or remanufacturing since the project started.

Sabic operates in over 50 countries and employs more than 33,000 people worldwide. The last of its redundant asssets on Teesside will be demolished and cleared by the end of this year.