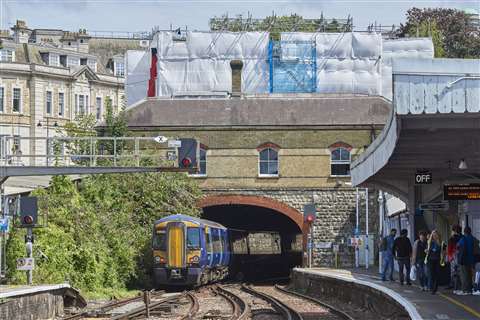 The 26-week project took place at one of the area’s busiest lines, near Maidstone East station in Kent. Rhodar also designed and installed a waterproof membrane to the exposed tunnel arch and permanent fill solution to the basement, ahead of a new forecourt and station entrance being built.

As Network Rail’s principal contractor, Rhodar was tasked with asbestos removal and the coordinated controlled demolition of the weather-damaged building, which had been derelict for over 10 years.

Due to the building’s position, demolition had to be carefully planned and Rhodar began by removing all timber flooring from the ground floor so the exposed basement could be backfilled with 6F2 crushed concrete.

The basement voids surrounding the tunnel were filled to 600 mm (24 in) above the crown of the tunnel, allowing a 47 t high reach to be positioned at the rear of the site and use its 28 m (91 ft) reach to take the building down floor-by-floor.

A fully designed scaffold, erected around the building gave safe access to the roof and upper floors, was later adapted as a demolition screen for safe working and to minimise disturbance from dust and debris.

“This project included a live railway line, a tunnel structure, and the need to avoid any disruption, which combined to add a further degree of complexity,” said Rhodar director of demolition Andrew Fisk.

“The team created a bespoke project plan for Network Rail, so the demolition was delivered to the highest standard in a safe and controlled way.”