On the up in Vienna 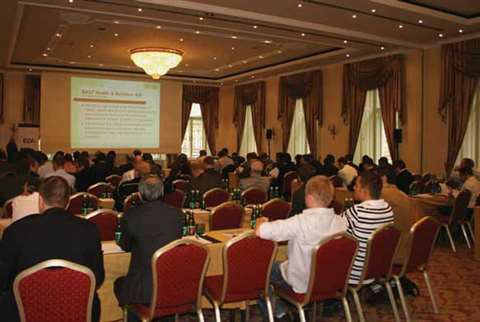 Over 60 delegates attend the event, held in the Radisson SAS Hotel

Held in the Radisson SAS Hotel in Austria's capital, Vienna, the EDA's autumn event featured a good mix of technical papers and equipment presentations. The event opened with a formal welcome from the new EDA president, Yves Canesa, to all the delegates and sponsors attending the event (of particular note, he especially thanked the president of the Deutscher Abbruchverband e.V, Walter Werner – but more of that later).

Also worthy of note was the fact that attendance was up on previous events, with more than 70 delegates taking their seats on the first morning

I will admit to being somewhat concerned when I saw the number of presentations that the EDA proposed would be made in the one and a half days available – in addition to the 10 technical papers from contractors and others, 13 short presentations were to be made by the sponsors of the event. Would, or even could, the event run to schedule? The answer to that was yes, the technical papers ran to their expected length, while the sponsors (including D&Ri) performed admirably by keeping their more sales orientated offerings close to their allocated 10 minute slots.

The result was a conference that ran to time, offered a excellent exchange of valuable and interesting information, while at the same time allowing that most valuable of activity at such events – networking – to freely take place. To encourage this, the almost obligatory Gala Dinner was held under the chandeliers and gold-leafed ceiling of the Palais Pallavicini, with a more informal diner on the final night at Restaurant MAK.

As said above, there was a good mix of full papers reporting on demolition projects from around Europe – Kingo Karlsen's Richard Kristensen on the demolition of a BASF facility, with another on grain silos in Denmark, Detecsa's Francisco Cobo Valero on the demolition work following the collapse at Madrid airport's terminal 4, Demolscavi's Mr Cosola on the deconstruction of a sequence of Italian road bridges, SNED's Didier Manceau on demolition work at Roissy Airport, Anka's Daniel Santos on the use of mini-excavators on a number of Spanish worksites, Fratelli Baraldi's Massimo Baraldi on an overnight removal of a flyover over the Italian A1 motorway and finally Safedem's William Sinclair on a five multistory explosive demolition job in Glasgow.

Other technical papers included another explosive report, this time from Pierre Burguiere from CEBTP, who expounded on the theory of 'overturning' structures rather than collapsing them vertically using explosives.

More sponsors were attracted to the event due to the new approach taken by the EDA to this area – a lower cost approach that attracted considerably more equipment manufacturers – and even prompted the publishers of this magazine to provide support for the event. OEMs were represented by Komatsu and JCB, with Case dealer W 41 Equimop also present, as was another dealer, Gruppo Effe; other sponsors included Atlas Copco, Arden, Mantovanibenne, Trevi Benne, Novital, OSA and Socomec, along with Ritchie Bros auctioneers and last but not least, D&Ri ourselves.

Unheralded stars of the show were the translation team providing the parallel translation service to the delegates. They were kept on their toes by a fine mix of accents, especially the broad Glasgow dialect that surfaced during Mr Sinclair's presentation (as well my own somewhat less broad Glasgow accent).

And finally to the presence of Walter Werner in his official capacity of president of the German demolition association (Deutscher Abbruchverband). Readers may recall that in the last issue, D&Ri commented that it was our belief that an EDA without the presence of Germany, one of the largest European demolition markets, placed the former at a distinct disadvantage when it came to lobbying in Europe on behalf of the industry. We went on say that we understood moves had been initiated by Mr Canesa and vice president Giuseppe Panseri that were hoped would result in the latter's eventually rejoining.

It now appears that a decision concerning this may be closer than we thought at that time. D&Ri understands that the Deutscher Abbruchverband is likely to reach a decision either way by the end of this year. It is this writer's hope that we will see an answer in the positive.

In summary, the new format was a success, the atmosphere was up beat, delegate numbers were up, and the sponsors were happy, but the EDA has to continue the upward climb. The next event is to be held in Rome on the 7-9th June 2008 and hopefully we will see an even more successful event – perhaps with the presence of delegates from countries whose industry associations are currently members of the EDA, but who in recent years have been more notable for their absence.