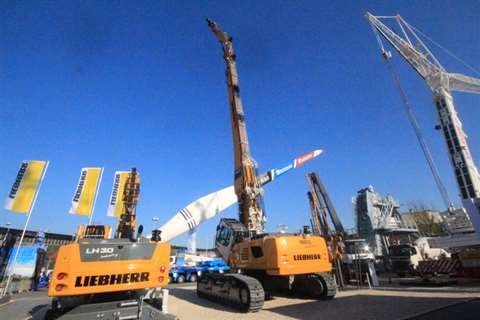 The Libebherr R 960, new at Intermat, rests in the early morning sunshine on the Parc des Exhibitions in Paris

Liebherr used the Intermat stage to introduce its latest demolition high reach in the shape of the R 960 Demolition high reach. Available in two working height configurations of 28 m (92 ft) and 33 m (108 ft), the machine weighs in at 77.3 to 93.5 tonnes in the later configuration with additional counterweight fitted and can carry a 3.5 tonne tool weight (including any quick coupler fitted). Power comes from a Stage IV/Tier 4 Final Liebherr diesel delivering 240 kW (326 hp).

The new machine replaces the R 954 C and Liebherr stressed that while the specification suggests a reduced working height of 1 m (the R 954 C could reach to 34 m), the new machine in reality occupies the same working envelope as its predecessor. It features Liebherr's new Demolition Control system that automatically ensures safe operation depending on the position of the machine and the tool it carries.

Liebherr said the the new designation is intended to mark the special nature of the design, with the 0 ending to be used for all future demolition specific machines. According to the company, the next machine that will be introduced will be a smaller model with a working height in the low 20 m (66 ft) range that should make its appearance towards the end of 2016.