Demolition on the Spree - the 15th annual German Demolition Conference 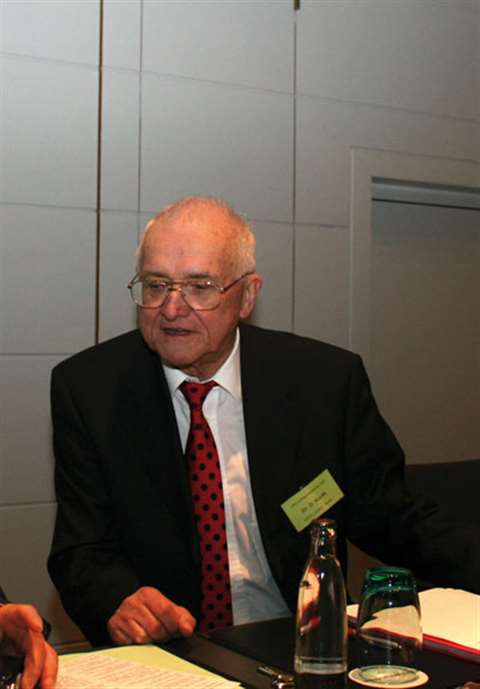 More than 400 delegates turned out at the Hotel Berlin Berlin on Friday 20th and Saturday 21st of March for the 15th German demolition conference, making the event once again one of, if not the largest gatherings of industry specialists to take place this year (D&Ri naturally hopes that the joint D&Ri/EDA Demolition Summit in Amsterdam in November will prove an equally attractive draw).

An intensive programme ensured that there was something of interest for everyone to digest.

As always Dr Dieter Korth opened the event with a formal welcome to the delegates and thanks to the more than 20 manufacturers who officially sponsored the event. Despite challenging economic times, all the names one would expect were present, highlighting the equipment that they offer to the demolition industry. He was followed by Deutsch Abbruchverband president Walter Werner, who outlined the major news events relating to that association's activities, as well as two major initiatives that the German demolition association will undertake in the near future (see box story).

It was then to the meat of the event, with the first of the 18 technical papers. Safety and quality issues featured heavily in the programme - ranging from health and safety best practice through the ever-present problem of hazardous waste (especially newly identified sources) and materials to the environmental issues where the use of large breakers in urban environments are concerned.

It is relevant at this point to pay tribute to organiser Dr Korth, who will relinquish his role as organiser of the event by 2011, at which time the DA will have full responsibility for the event. Over the last 15 years, Dr Korth has established the Berling German Demolition Conference as one of the best attended and relevant industry events, and one that I have very much enjoyed attending for the last three years.

The social side of life was not ignored, with the night of the 20th March seeing the now traditional visit to "Alte Pumpe (mit Freibier!!)". The venue, a revitalised pumping house close to the Hotel Berlin, boasts traditional German fare such as schnitzel, pork knuckle, sausages and meatballs - and yes, Freibier means exactly that.

The Saturday morning saw a open forum discussion over the development of German standards for the demolition industry, while other delegates took advantage of the opportunity to visit a number of ongoing demolition projects within the city of Berlin. In the afternoon, a visit to the WW2 German Army headquarters bunker complex in Wunsdorf was a must for the history buffs at the event. Finally, the few remaining delegates spent the Saturday evening at one of Berlin's renowned review shows, bringing to an end a very successful and rewarding stay in the German capital.