There was more Japanese progress in the shape of Marutone Apex (52nd) and Matsuda City Development (53rd) who found themselves sandwiched between contractors from the United Kingdom, France and Germany. In fact all the first seven companies in the bottom half of the d&ri100 posted increased turnovers and all except Avenir Deconstruction of France improved their position at the same time. 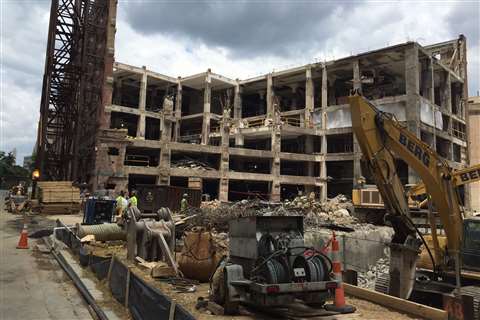 The British company leading off this part of the listings was Thompsons of Prudhoe, based in the north east of England, and MGL Demolition (59th) made it a double success for the region with a huge increase in turnover of its own.

Sauer-Bau of Germany, as well as rising four places in the table, held the symbolic 75th position, its turnover of $25.8 million being around $1.5 million lower than the total Wooldridge Ecotec posted in the same spot a year ago.

Only two of the six American companies in this quartile of the listing improved their turnover relative to the previous year, leaving Homrich Wrecking the best performer with an increase of just under 5%.

Inevitably, things tighten up considerably towards the end of the list, with barely $7.5 million separating the final 25 companies. Strong performances included those of AR Demolition and the National Wrecking Company to enter the list at joint 85th, while R Baker & Sons posted a $4 million increase on a turnover that was only $18 million to start with, which earned it a ten-place climb to 89th.

New entries, the lifeblood of the d&ri100, also become more frequent at this end of the table, with no fewer than four in the final nine positions.

So there it is. The 2018 d&ri100 is decided, get ready for 2019. Will we see a new name at the top of the list, or will NorthStar remain out in front? As always, it will be fascinating to watch.