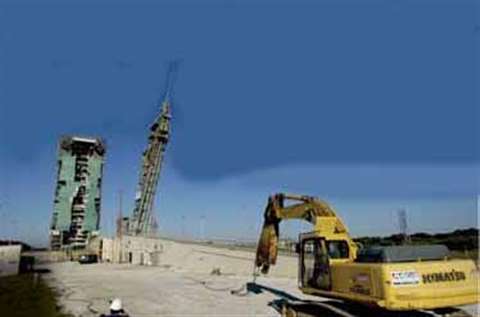 No longer required since the rockets they were built to propel into the skies were withdrawn from service, the facilities at Cape Canaveral consisted of two Atlas launch complexes – 36A and 36B. Each featured a 64 m (210 ft) Mobile Service Tower (MST) that moved the rockets into position, a 58 m (190 ft) steel Umbilical Tower (UT) weighing 182 tonnes (200 tons), as well as other associated facilities and support structures, including a 9.2 m (30 ft) high, 9.2 m wide and 102 m (335 ft) long Launch System Facility (LSF) and a concrete 'flame bucket'.

Marcor was also contracted by the main contractor for the job, AMEC Earth and Environmental, to remove a 73.2 m (240 ft) high, 92 m (300 ft) wide and 84 m (275 ft) deep Vertical Integration Building (VIB), used to assembly up to four Titan rockets at a time, as well as an adjacent railway track used to carry the assembled rockets to the various concrete roadways and other small structures.

Environmental testing has shown that the steel used on the 36A MST could be totally recycled but that about a third of the steel – 818 tonnes (900 tons) – making up the MST on 36B failed the Toxic Substances Control Act (TSCA) where PCB paint contamination (<50 ppm) was concerned. This was also the case for the high bay sections of the Titan VIB.

It was therefore decided that the contaminated steel would be consigned to an on-site regulated landfill once the demolition was completed. The rest of the material from the site would be recycled. In total, 10,000 tonnes (11,000 tons) of steel will be landfilled and 4,546 tonnes (5,000 tons) will be recycled by the time the project is completed.

Marcor used a mix of demolition techniques to handle the job. Marcor recommended the use of a technique it calls 'pullover' to bring down the UTs. This involved making angled cuts on each tower's front legs that allowed the legs to buckle when the angled sections were pulled out using wire ropes.

Each tower took several hours to be prepared and then brought down in a precise, controlled manner. Once the towers were down, workers using excavators equipped with shears and grapples cut and pulled free the structural members. The recovered steel was then sized, stockpiled for loading and subsequent transport.

Meanwhile, the MSTs were toppled by implosion after which the structural members were carefully cut using shears and limited torch cutting in non-PCB affected areas. The material was then loaded out following a careful sorting process to separate out the contaminated material. The high bays of the VIB have been deemed as being entirely contaminated, while steel in the lower bays, along with aluminium side coverings, will be recycled.

Manual demolition is being used to bring the VIB down, with workers cutting the steel into appropriate lengths, which are then lowered to the ground to be sorted, sized and loaded for transport.

The entire job was scheduled for completion by the end of this autumn.

Working in the environs of an active launch facility required flexibility on the part of the workers involved to cope with the necessary security requirements. Special Cape badges were required for the full-time Marcor crew, which averaged at around 12 per day. The team also had to work around periodic critical 'lock-downs' on the site prior to launches as well as avoiding certain locations on the site where potentially hazardous operations were being conducted.