A head for heights needed during Munich demolition 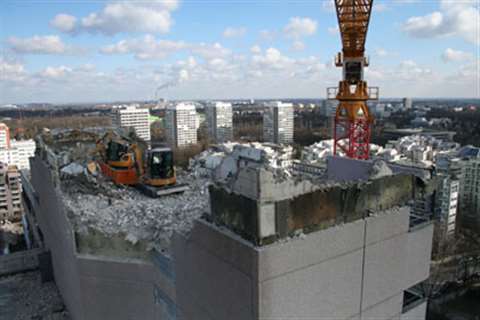 High above the streets of Munich, Balthasar Trinkl’s Cat mini excavators work to bring down the Bavarian Insurance Chamber building

Demolition operatives from German contractor Balthasar Trinkl GmbH & Co. KG required steady nerves in addition to their skills as machine operators during the demolition of the 55 m (180 ft) tall Bavarian Insurance Chamber building in the German city of Munich's Arabellapark.

The structure, the tallest building demolished in the city in the last 10 years, was located in the upmarket Bogenhausen area of Munich and housed that Association of Statutory Health Insurance Physicians.

It was being demolished to make way for a new build but posed a challenge, since it was located immediately adjacent to a Deutsche Telekom exchange that services one third of Munich's telephone network.

According to technical director Florian Trinkl: "We had to avoid any possible damage to the exchange. It's precisely for this reason that we could not blow the building up."

With a total of 16 floors, the upper floors of the building were beyond the reach of Trinkl's high reach excavators, therefore the decision was taken to demolish the building floor by floor down to a height where the high reaches could work using three Cat mini excavators (two 304s and a 302.5) carrying demolition attachments.

Over the course of four months, working 10 hours a day, six days per week, the minis demolished the upper nine floors down to the 28 m (92 ft) level, at which point the high reach took over.

A rented tower crane was positioned on the site to lift the machines and other equipment onto the top of the building.

This required the installation of concrete pile foundations to provide the crane with the necessary stability as well as the use of sling gear and two specially fabricated trusses to suspend the mini excavators.

According to Florian: "Not everyone can do this job. Even the best drivers find it a real problem because of the height, particularly when they are working outside the façade with the mini excavator, which is in an approved container base, suspended from a crane cable.

"There was really no margin for error with this job. Any mistake would have proven fatal. Safety always comes first. In our company's 87 year history, there has thankfully never been a fatal work accident. And we want to keep it that way."

In all, the demolition involved 50,000 m3 (65,400 yd3) of enclosed space, with as much as possible of the resulting debris being segregated for recycling.