‘Where are new demolition workers coming from?’

The principal of a major US demolition firm has told D&Ri he does not know of a single contractor unaffected by the global people and skills shortage affecting the industry.

Jim Graham, of Georgia-based Winter Environmental, is also a board member of the US National Demolition Association, and his work takes him round most of the country. 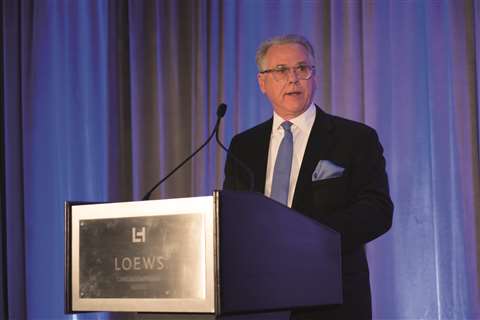 Jim Graham at the World Demolition Summit in Chicago in 2021. Photo: D&Ri magazine

His conclusion is that everyone is in competition for labour – and not just from other demolition companies.

“We anticipate $550 billion of construction in the next 10 years,” said Jim.

“That is an average of between 300,000 and 600,000 craft workers a year we need to bring online. Where are they coming from?”We are fighting forces from every sector in our competition for labour. If someone wants to drive a tractor trailer for Walmart, they can get US$110,000 a year. If it was me, I would say maybe driving a truck isn’t that bad.

“Or you can work at McDonalds, make $20 an hour and get a $1,000 signing on bonus. You do not have to put on a fire-resistant suit and personal protective equipment, and you don’t have to work in extreme heat or extreme cold conditions. You do not have to travel, or sleep in a hotel six nights a week.

“It is a challenge that everybody is facing whether they are in Australia, the United Kingdom, Germany, here in the States or in Canada.

“It’s a universal problem that I think most people right now are working and collaborating to figure out a solution for.”