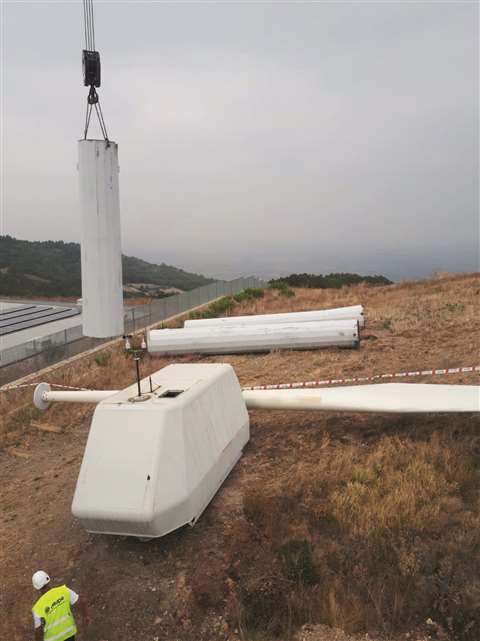 The machines and parts of the plant to be dismantled, demolished and disposed of at the Edison wind farm in Castelnuovo della Daunia were 10 single-bladed WTGs, model Riva Calzoni, each including the nacelle (upper part connected to the rotor blade) and tower weighing approximately 35 t.

Very limited space was available. The wind turbines were located on the site at different heights and connected by impervious, narrow, steeply sloping roads, which often had to be repaved. It was necessary to create new areas to position the crane. The dismantled parts were placed on the work site and given the limited space. Given the unpredictable weather conditions, which could change rapidly and prevent dismantling, dismantling operations had to be carried out quickly.

The presence of fields with dried-out crops during the dismantling period posed a risk of igniting and spreading fires across the surrounding hillside. These are some of the conditions that made this project a real challenge.

The demolition of the McMullin Building and ancillary buildings proved to be a benchmark project. The University of Newcastle, Drumderg and TSA Management established complementary business protocols for planning, achieving and exceeding best practice environmental, recycling, HAZMAT removal and safety across all phases of the demolition project. 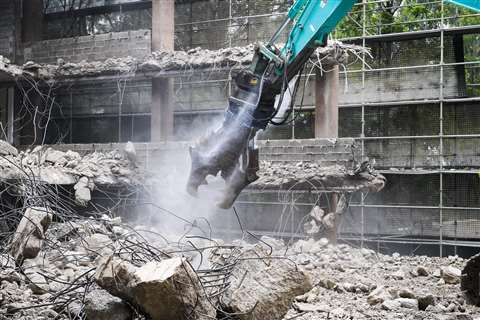 In total the project included:

Grupo Mitre is the first company to internationally obtain B certification – for its environmental and social impact – in the field of demolition, being part of its culture from the beginning of the company as part of the business. 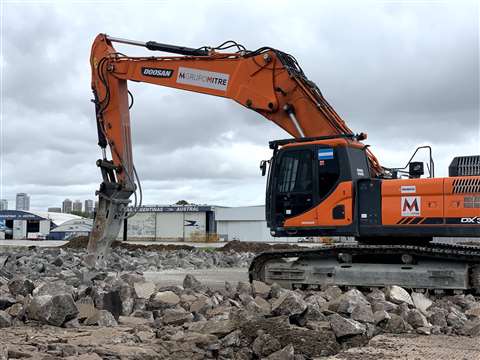 This allows the company to permanently participate in its own works or those of third parties, proposing alternative processes.

An example is “Aeroparque Internacional Jorge Newbery (AEP)” where, through project analysis based on the circular economy, it allowed Grupo Mitre to replace the virgin raw material stipulated in the work specification with the same material extracted in the demolition work; after an in-situ crushing process, reaching a quality equal to or higher than the raw material.

Beyond the efficient management of tons of recycled material throughout the history of the company, the project to rebuild the runway of the most important airport in the country was an example of how significant the role of Grupo Mitre is.

Grupo Mitre says it is very important to highlight what the dynamic of recycling concrete and recovering iron implies for our company. Our strong environmental and circular economy policy ended up generating a paradigm shift.

The US Playing Card Company led the world in design and manufacturing of quality playing cards. This project just outside of Cincinnati in Norwood, Ohio, entailed the remediation and demolition of the plant that served as its World Headquarters from 1899 until 2009.

Designed by Samuel Hannaford the historic clock tower was preserved and will be incorporated into the new $100 million mixed-use redevelopment site called Factory 52 by PLK Communities.

This was a high-risk, complex abatement and demolition project.

Through O’Rourke’s expertise and guidance, demolition work was completed safely without any damage to neighbouring buildings, disruption to the public or negative impact to the environment.

Every major demolition technique was used on this project - from structural demolition with a crane and wrecking ball to selective and interior demolition to hand separate the historic clock tower from the main building and use of a modern high-reach demolition excavator to assist with take-down and post-secondary debris reduction.

The Campbell’s soup factory was a challenging project with an aggressive timeline. 12 buildings varied from a warehouse to four-storey level buildings, a heavy-duty concrete manufacturing plant as well as a 60 m (200 ft) chimney that could not be dropped. This project included (post demo) the removal and processing of 34,838 sq m (375,000 sq ft) concrete slab on grade. 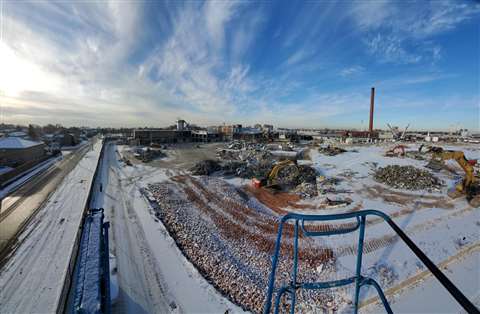 The south building, erected in 1931 and 1944, was deemed a historic landmark and required a separation to keep the two-storey façade and adjacent bays in place. Façade historic elements were protected and Priestly built a robust wall to enclose the building. Permanent steel columns were put in place for support and installed for concrete roof slab. Priestly said its experience and expertise with rapid demolition meant it had the right manpower and appropriately sized equipment for the task at hand.

A total of sixteen large excavators, skid-steers, cranes, manlifts, trucking and elevating work platforms was used to perform the work with a peak workforce of 80 workers and eight supervisors.

Demolition of structures was completed in a 10-week period with an additional six weeks for processing, sorting, and loading all the various recycling materials.

The recycling rate reached on the project was 88.98%.