Will living hoardings mark out the job sites of the future?

With property prices soaring to record levels, developers are constantly looking for underused parcels of land in cities, and more attention is being paid to locations where urban growth and productivity patterns have shifted, meaning these neighbourhoods have become neglected.

Many of these come under the banner of urban regeneration schemes.

This increased activity provides opportunities for demolition contractors, and with sites sometimes being operational for several years, living hoardings are now being considered. 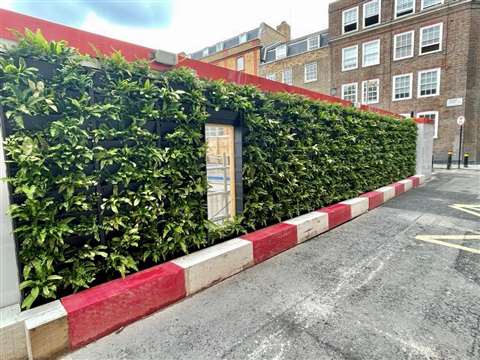 In Britain, legislation is also encouraging new ways of thinking, with Section 61 of the Control of Pollution Act 1974 allowing contractors to demonstrate to the local authority that they have taken a proactive approach to minimising the environmental impact of demolition and construction activities.

Control of Pollution Act 1974
Living hoardings can help align with these requirements.

The densely populated plants help muffle machinery and vehicle noises coming from the site while the plants also remove dust, dangerous particulates and harmful pollutants from the air.

In addition, many community groups, planners and local authorities are keen to promote biodiversity, and a living hoarding system encourages wildlife such as bees, insects and birds, which become an attractive feature in an urban setting.

Informing the community about the benefits of a living hoarding system before works begin can help alleviate concerns. This kind of approach, which minimises negative impact in the local community whilst establishing a rapport, demonstrates that responsible businesses take into consideration all those affected by construction activities.

London’s Cycle Superhighway 6 (CS6)
The site boundary runs along Cycle Superhighway 6 (CS6) which goes from Elephant & Castle to the south of central London to King’s Cross in the north. A key requirement was that Biotecture had to avoid disruption to cycle users during deployment of the living hoarding and that vegetation did not encroach into the cycle lane. In a further sustainability consideration, the client was looking for ways of reducing mains water use for irrigation.

The living hoarding at Farringdon also integrated with site signage. This was important because it conveyed key messages about sustainability as well as information about the project partners. Air quality in central London is an ongoing challenge and the client was looking for ways of using natural vegetation to mitigate these effects, specifically from construction activity on site.

The living hoarding system was deployed over two weekends when cycle traffic on CS6 was lighter. It was a significant benefit that weight loadings on the living hoardings are transferred to the ground, meaning they only required restraint fixings. This allowed the living wall troughs to be easily attached to the existing hoardings without the need for secondary structures or lifting equipment that may have disrupted the Cycle Superhighway.

We chose plants specifically so as not to encroach on to the adjacent cycle path, while rainwater collection was achieved by keeping the top troughs of the living hoarding unplanted, to act as a rain catcher and allowing attachment of signage. The living hoarding contained 2,926 plants, from 15 species, recommended for being better at removing dust and other harmful pollutants.

Feedback from contractors said that site teams like working alongside living hoardings because it creates a relaxing, restorative green space, which can reduce stress and boost productivity.