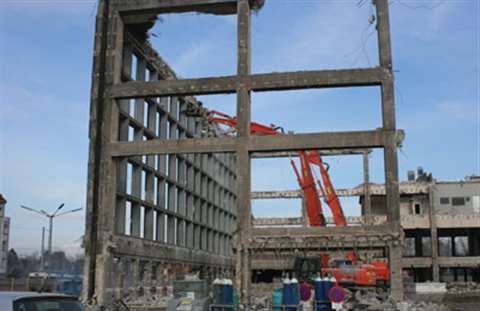 The Austrian capital of Vienna is similar to many major cities in Europe in that its rail infrastructure began development in the early days of rail transport, with privately owned companies developing the initial infrastructure, which then frequently became part of State railway enterprises.

Where the Suedbahnhof was concerned, it was formed from two termini built at an obtuse angle with lines going from one to the south of Vienna and other with lines running to the east of the city. In between the two termini were built a locomotive factory and other workshops, along with office accommodation.

A major redevelopment is now planned for the site, the BahnhofCity project, Once cleared, part of the Suedbahnhof site will be used for the constructions of a new rail station (Wien Hauptbahnhof), due for completion in 2012, which will eliminate the main weakness of the original Suedbahnhof since it will allow through traffic.

The new Hauptbahnhof will provide connections to long distance trains arriving in Vienna from all directions and further strengthen the position of the city as a hub between the east and west, and north and south.

In addition to the new station, the project also includes the construction of a modern residential area with 5,000 new apartments and all necessary infrastructure such as a school, kindergarten and public park.

A new shopping centre will also be built with space for 100 shops and a variety of restaurants. Offices and a hotel will also be part of the complex. The new 'BahnhofCity' promises to create as many as 15,000 jobs and the total area that will be redeveloped accounts for 109 hectares.

The old station therefore closed down during December 2009, with demolition expected to be completed by the end of June 2010.

One major feature is a difference in height across the site of 4.5 m (14.8 ft), requiring considerable earthmoving operations to provide a level footprint for the new construction.

In addition to a tight schedule and large amounts of material to be dealt with, the Suedbahnhof demolition poses several special challenges that Porr will have to overcome.

A multi-storey car park built in the 1960s immediately adjacent to a major thoroughfare requires the provision of a protective structure over tramlines which are still in use.

Porr is using smaller excavators with breaker and crusher attachments to bring the structure down from the top in a controlled fashion to ensure that minimum disruption is caused to passing tram and vehicle traffic.

Another major challenge faced by the contractor is the presence of two WWII-vintage reinforced concrete bunkers with 3 m thick walls with extremely strong reinforcement, buried to a depth of 7 m (23 ft).

To demolish these, Porr plans to excavate down around the side of the structures, break the concrete into slabs which will then be lifted and removed. In all, Porr expects to have to deal with 10,000 m3 of concrete from the two bunkers.

According to Porr's construction manager on the site, Martin Taborsky: "We will make use of the Hitachi machines we have on site [three ZX350s and one ZX470] on this part of the demolition project, since they offer the kind of strength and power that will be required.

Five tonne hydraulic hammers will be used to penetrate the concrete of the bunkers, since shears are too weak to handle this material."

"We are carrying out a step-by-step demolition, moving from the south of the site to the north. This allows for more efficient on-site recycling, which is an essential feature of the job, with much of the recycled material being stockpiled for use during the construction phase that will follow."

A key feature of the demolition is the tight time constraints laid down by the main contractor, Strabag. Porr has just six months to complete the demolition phase and this tight timeframe has meant that the company has had to work on a number of different structures simultaneously.

Despite this challenging schedule, at the time of D&Ri's visit to the site at the beginning of march, Martin proudly said: "We are already one week ahead of schedule and I do not expect any difficulties in completing on or before the scheduled date of 30th June."

He went on to say that one thing helped speed up the work was the fact that the roof of the main station building, a 20 tonne steel structure, was in fact not held in place except through its own weight and therefore could be lifted off in one piece using a mobile crane.

A high level of manpower was required during the soft strip phase of the project but by the time of our visit, some 70 Porr and subcontractor personnel were on site, with a total of 20 machines working, ranging from large tracked excavators (including the Hitachi high reaches), through wheel loaders and smaller excavators to mini-excavators and skid steers, along with 20 trucks for material transfer around and off site.

Porr in fact was also tasked with the demolition of the Vienna Central Post Office railway station, which occupied the southern portion of the site as a separate contract (although this was a lower profile project that gained far less publicity).

This also consisted of 500,000 m3 of concrete and earth. In fact, the BahnhofCity project consists of six separate contracts, three of which were for demolition related aspects and which were gained by Porr.