More than 30 places are now open to applications from anyone aged 16 or over for the Demolition Apprenticeship programme starting in the United Kingdom in September – including existing employees and new recruits of demolition firms.

The Trailblazer apprenticeship scheme is set up specifically by demolition employers in conjunction with the education sector and is described as “training developed by the industry, for the industry”. 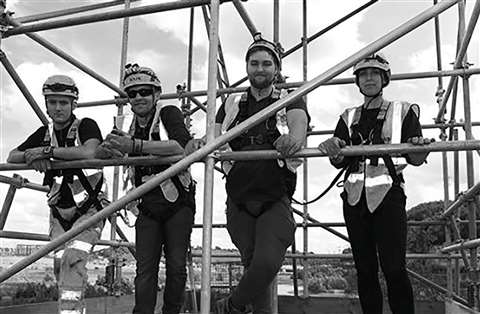 Members of the most recent cohort from the Trailblazer programme. Photo courtesy London South East Colleges

Training is delivered both on-site and in a classroom environment, with classroom training, totalling 34 days over a two-year period, delivered at satellite locations, coordinated by LSEC (London South East Colleges).

The NFDC said the scheme has been made possible through the commitment of Aaron Davis (head of learning and development, Keltbray) and Stuart Accleton (operations director, Erith) alongside LSEC and other experts driving industry training standards.

The scheme has the backing of both the National Demolition Training Group (NDTG) and the NFDC, with many NFDC accredited demolition contractors already applying to enrol candidates for the September 2021 cohort.

Howard Button, CEO at the NFDC and NDTG, said: “We urge the industry to get behind the Demolition Apprenticeship scheme.

“The depth, breadth and quality of the training the Apprentices receive is second-to-none, funding is available to keep costs down and the industry is very much in need of an injection of newcomers to the workforce.”