The Morandi Bridge - Performance under pressure

When on 14 August 2018, a 210 m (688 ft) section of the Morandi Bridge collapsed, Genoa suffered one of the saddest tragedies that had ever occurred in the history of this ancient and glorious city.

Since 1963, the bridge had not only been part of the modern landscape and architectural representation of the city, but due to its location, was one of the major links from Italy to France.

After this tragic event, the city of Genoa supported by the Italian government decided to accelerate demolition of the bridge. Fagioli was called along with other expert operators for the removal of the Morandi Bridge sections. This included experts in structural and architectural design and companies specialising in environmental reclamation. 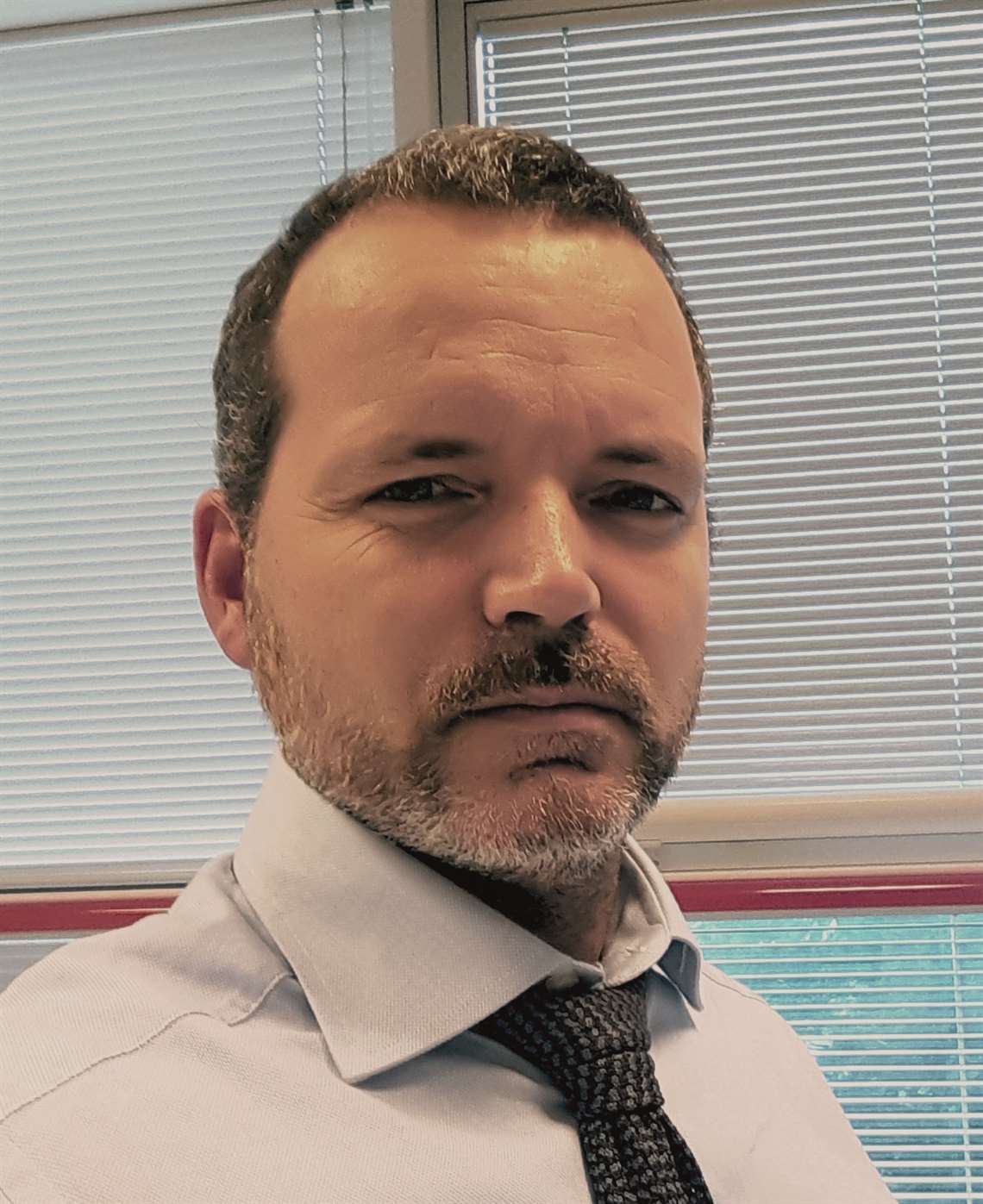 Andrea Gazzola, business development manager at Fagioli, who presented on the Morandi Bridge at the 2020 World Demolition Summit

Fagioli used a tower lift and strand jacking system, crawler cranes – which were used for the lifting or lowering of materials and as a support for Fagioli equipment – and SPMTs (self propelled modular transporters) to mobilise sections at ground level.

Removing the beams
In February 2019, Fagioli started removing beam number eight, between V-shaped piles numbers seven and eight, weighing about 916 t and about 36 m long (118 ft) and 18 m (59 ft) wide. Fagioli used four 600 t capacity strand jacks, two on the western side and two on the eastern side, to lower the central bridge section.

The jacks used for the lowering operation were positioned onto cantilever beams, provided with four additional strand jacks of 180 t capacity each, with the task of balancing the whole structure.

The bridge after the collapse in August 2018

Two counterbalancing support beams were transversely positioned underneath the western and eastern bridge pylons to anchor all the lifting and lowering structure to the west-east bridge sections. Two support beams were positioned underneath the beamed section. On the eastern bridge pylon another structure was positioned at the top end of the bridge with two additional strand jacks, with counterweights tasked with providing a counterbalancing action during the lowering. 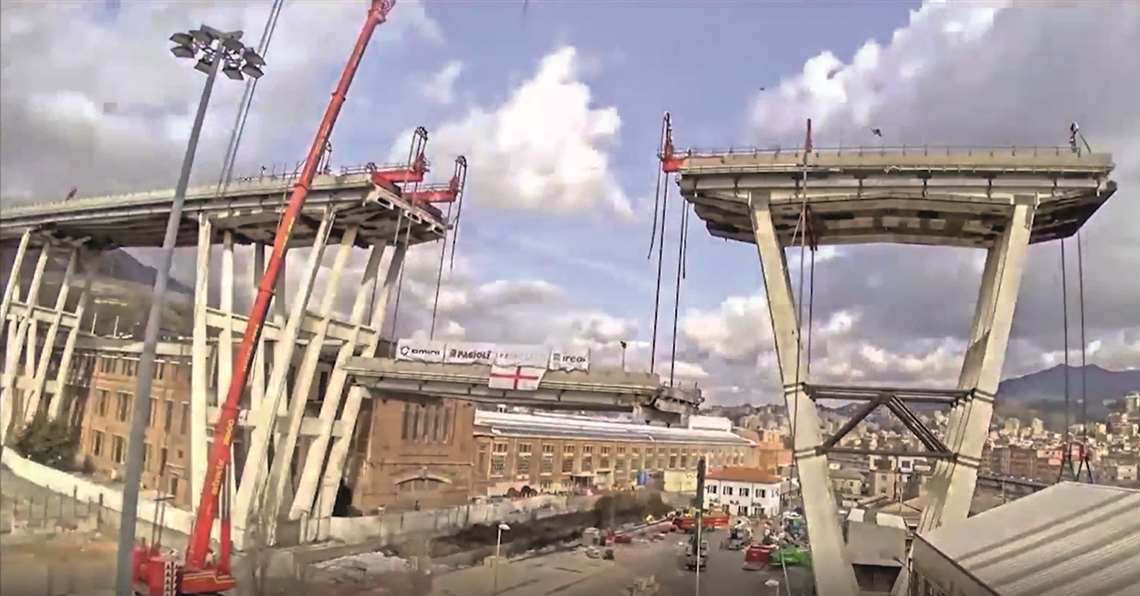 The first operation at the bridge, in February 2019

Following the same procedure with the position of the counterweights and strand jacks, removal of decks, constraints such as fixed and mobile joints, lifting action of the beam by a few centimetres, cutting operation with diamond wires, beam number seven (850 t), beam number six and beam number five (each weighing 916 t) were lowered by the strand jacking system in two months. By the end of March, deck beam number four was lowered and touched the ground.

In come the cranes
In the meantime, on 18 March, five cranes arrived in Genoa to dismantle the western piles. The two main cranes had a capacity of 600 t each. V-shaped pile number five was the first pile to be demolished on the west side of the bridge. Preparations started with the removal of the lateral parts and the sidewalks. The deck was sectioned in three parts in a longitudinal direction – the first section weighing 300 t was lowered on 16 April, the second on 19 April and the third on 26 April, by crawler cranes with a rotating action. 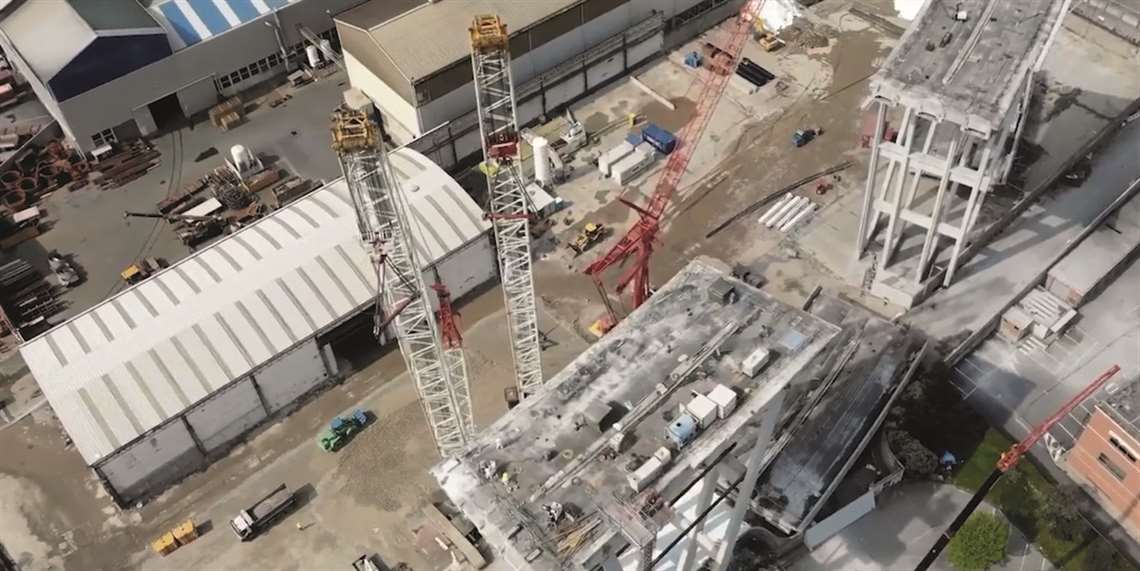 Two of the five cranes sent to Genoa in March 2020

Beam number 11, weighing 750 t, was cut and lowered with jacks by the end of May. Rather than blasting with explosives for pile number eight, it was decided to disassemble just like the other piles. Being 4 m (13 ft) longer than all the others, it required two additional cuts. Like the other piles, the likes of pile number eight were cut with diamond wire, then loaded and lowered with Fagioli crawler cranes.

Pile number two, the last one remaining, was demolished at the same time as pile number eight.

Demolition of the bridge ended on 12 August 2019, while Fagioli’s scope of work ended on 31 July.

Different regulations
Demolition works on complex structures require relevant planning effort, as in many cases we need to operate on structures conceived and built many years ago, with different regulations compared to the requirements nowadays. This is the case with the Morandi Bridge, one of the highest expressions of Italian engineering capacity in the field of pre-stressed concrete structures back in the 1960s.

The partial collapse of the structure meant the rest of it was in a potentially risky condition. Consequently, the procedures adopted for the dismantling of the bridge involved the detailed preparatory phase of securing and functional testing of the remaining structures to ensure the operations would take place in the safest and most stable conditions possible.

The viaduct was divided into distinct sections with different structural peculiarities. On the west side the structure consisted of eight piles with inclined V-shaped columns embedded at the base with an average length of 36 m and height of 45 m (147 ft). On the east side there were only two large cable-stayed piles with cantilever spans, total length of about 180 m (590 ft) and total height of 90 m (295 ft).

Fagioli proceeded with repeated load tests, carried out by detecting the deformation of the structure. To identify the conditions of post-incidental stress, and the residual resistant capacity, the entire work was modelled on the finished elements and calculated in all its temporal phases – from construction to collapse up to the representation of all the intermediate steps of the planned dismantling operations.

The rheological effects – deformation and flow within a material – of post-compression were assessed with laser scanners. Steps were taken to restore the balance of surviving structures, which had high asymmetrical loads due to the lack of the collapsed structural elements.

The external vertical load, equal to about 300 t, was applied by means of two cable recovery jacks, positioned on to the cantilever beam of the pile, contrasted at the base by a counterweight of adequate mass.

Demolition phases
Once the safety and functional tests were completed, the real demolition phases began. On the west side the eight piles and the related beams were dismantled in pieces. For the dismantling of the beams, supported by the V-shaped piles, a metal structural work system was designed, resting on to the piles. The lifting system positioned at the end of the cantilever bridge section raised it gradually, to allow the cutting of the support on to which it was placed and lowering it to the ground. The positioning of strand jacks opposite to the lifting one guaranteed stability. 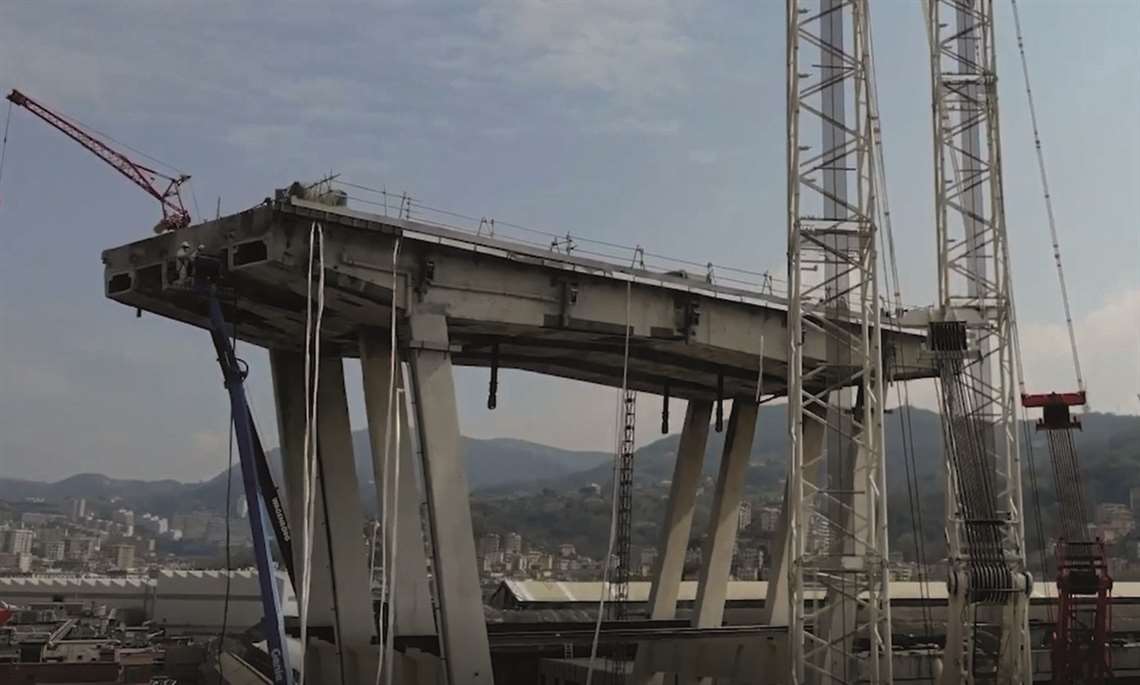 The support system of the Fagioli cantilever beam system was designed to distribute the loads on to the pile in a uniform manner, able to perfectly transfer the 250 t load of the two strand jacks on to the three beams of the pile. The load transferred to each concrete structure was applied by support, that is by contact from below, and not by traction.

The dismantling phases of the piles in the western area was carried out by making longitudinal cuts in the concrete structure about 36 m long with thickness up to 3 m (10 ft), using Tyrolit diamond wire specifically designed for reinforced concrete processing.

The whole concrete structure was divided into three large blocks with a weight suitable for lifting by two Fagioli Demag CC2800 crawler cranes in SSL configuration with a 78 m (255 ft) boom.

Due to the shape of the pile before it was cut, it was necessary to support it with the cranes, which maintained for the entire duration of the cut, a weight close to 100% of its weight.

What concerned the two piles on the eastern side that survived the collapse of the third, they were much higher and more complex to be handled compared to the piles on the western side as they were cable stayed with large cantilever beams.

Three pairs of Fagioli lifting towers were erected, two for pile 10 and one for pile 11, each 50 m (164 ft) high and positioned on specifically cast concrete foundations. Lifting towers had the function of temporarily supporting three cantilever beams of the piles from below in the event of structural collapse of the stays.

To increase precision and consequently monitor load transmitted to the reinforced concrete structure, our reading system with load cell was also adopted, with accuracy of 0.5% and readings 24 hours a day seven days a week. The system was mounted at the base of each jack and the calculation allowed the secure removal of beam 11. 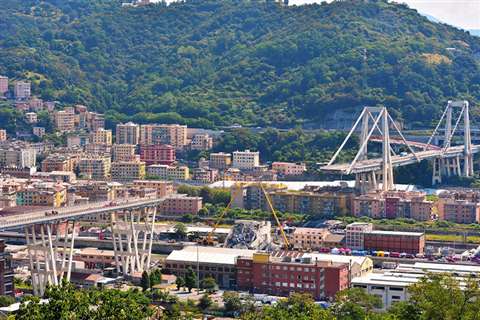 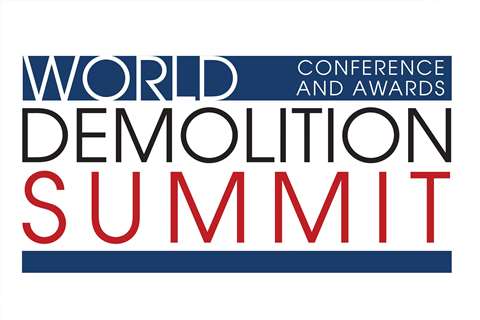