The former Department of Primary Industries building at 80 Ann Street in the Australian city of Brisbane – demolished last year by contractor Mainland Civil Queensland – presented an opportunity for development when the life span of the building reached its threshold of 50 years.

The site is situated between Ann Street and Turbot Street, encompassing a total of five lots. With the area surrounded by high rise, heritage, and hotel buildings, Mainland Civil Queensland was engaged by Mirvac Office Development to demolish the building. 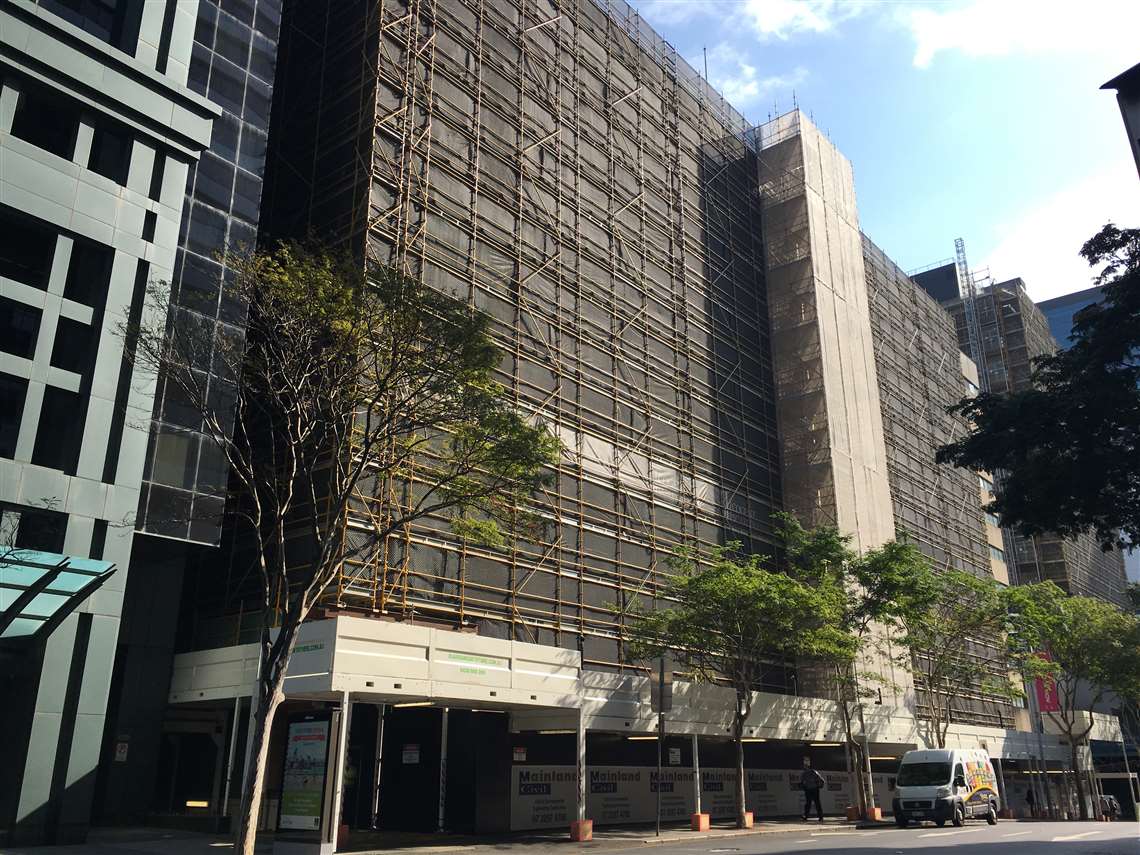 Approved hygienist
With new asbestos findings daily, the asbestos register was constantly updated and distributed to the workforce to ensure all personnel on-site were aware of all known asbestos hazards. 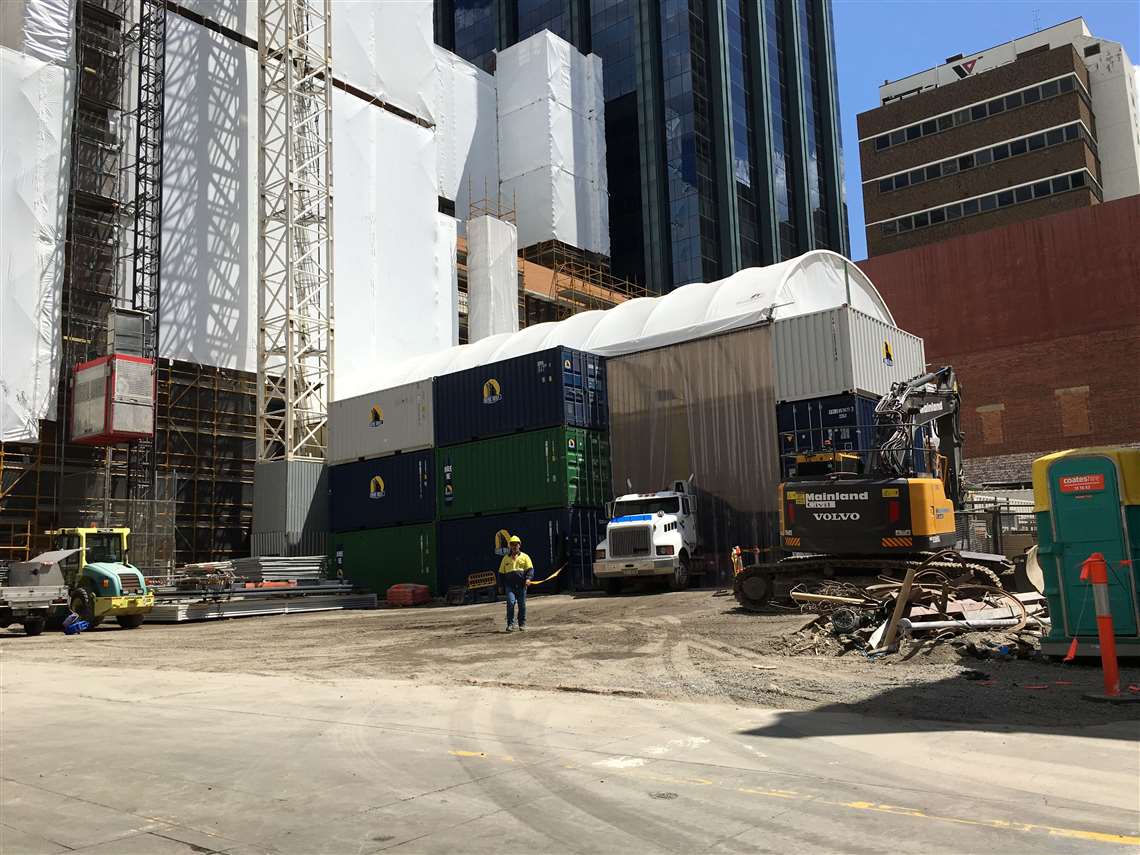 This led to second and third hygienists being engaged. As many as 10 full-time hygienists were on site conducting inspections and attending to new findings. To help manage and ensure the quality of work was maintained across the three hygienists and the two asbestos removalists, an overarching hygienist was engaged who attended daily site meetings and worked closely with Mainland.

To minimise delays to the programme night works were applied for and granted. This enabled a second shift to be completed five nights a week on top of the six day shifts already being completed.

The night shift permitted quiet works such as craning, constructing friable asbestos enclosures that also reduced the risk exposure to workers and the public. In total, the project amassed more than 120,000 hours of A-class asbestos removal works and hygienist supervision over 186 consecutive working days.

Specific asbestos removal control plans were developed with key direction on-air monitors being placed in high-risk areas at every shift. Throughout the demolition, a total of 1,391 asbestos samples were tested and a peak of 36 air monitors were used in a single shift with a peak of 56 in a single full day.

Overall 8,044 air monitors were set up in high-risk areas over the 226 days without a single asbestos reading resulting. The increased workforce enabled as many as four concurrent friable asbestos full-floor encapsulations to run concurrently.

The finding of friable asbestos in the Celdek fundamentally changed the way the structural demolition was completed.

Removal proved unsuccessful as structural integrity was compromised and attempts of containing the friable asbestos in an asbestos binding compound proved too unreliable, directing the project towards having an air encapsulation of the entire building.

This included a fire-retardant plastic wrapping of the entire scaffold system, misting system on the live demolition floor, water capturing and filtration system that contained all asbestos impacted water, and a specifically designed and constructed dome structure that enabled loading of asbestos construction and demolition waste into licensed semi-trailers. It was decided to still complete the Celdek injection with the asbestos binding compound to further minimise the risk of friable asbestos being released.

Bulk asbestos removal
It was structurally assessed that the demolition could be safely completed at the same time as the soft strip and bulk asbestos removal if there was a two-level separation. Ply sheeting was placed on the two scaffold decks below the live demolition floor to close the gap between the scaffold and the face of the building to catch falling debris.

Chain wire curtains were also installed on the two floors directly below the live demolition floor to catch falling debris and importantly to prevent any debris puncturing the plastic wrapping that prevented airflow from being released from the controlled work zone.

To combat the water ingress into the working floors below, the floor above the asbestos removal was waterproofed and a drainage system installed to catch the asbestos impacted water.

Access to work zones proved to be extremely difficult while the numerous full floor work fronts and the strict safety controls were in place.

For perspective, four active floors would be simultaneously soft stripped or encapsulated as a friable asbestos zone, the live demolition undergoing as well as the removal of asbestos render from the three stairwells. The average structural demolition cycle time for a typical floor of 2,275 sq m (24,500 sq ft) was seven days – excluding the removal of foundations.

To minimise delays to the overall project the civil works on the Turbot Street half of the project was accelerated to be completed at the same time as to the demolition. This proved difficult for many reasons; as this area also facilitated all site accommodation, dome structure, truck access to remove all asbestos impacted construction and demolition waste, as well as a laydown for all recycled steel, commercial and industrial and bulk asbestos waste.

This was overcome by remediation the abandoned heritage building on the Turbot Street half for site lunch rooms to free space for the concurrent civil works and careful co-ordination between the piling, site access ways, laydown of waste, and truck access was key to being able to complete so many tasks concurrently and to save time on the project. 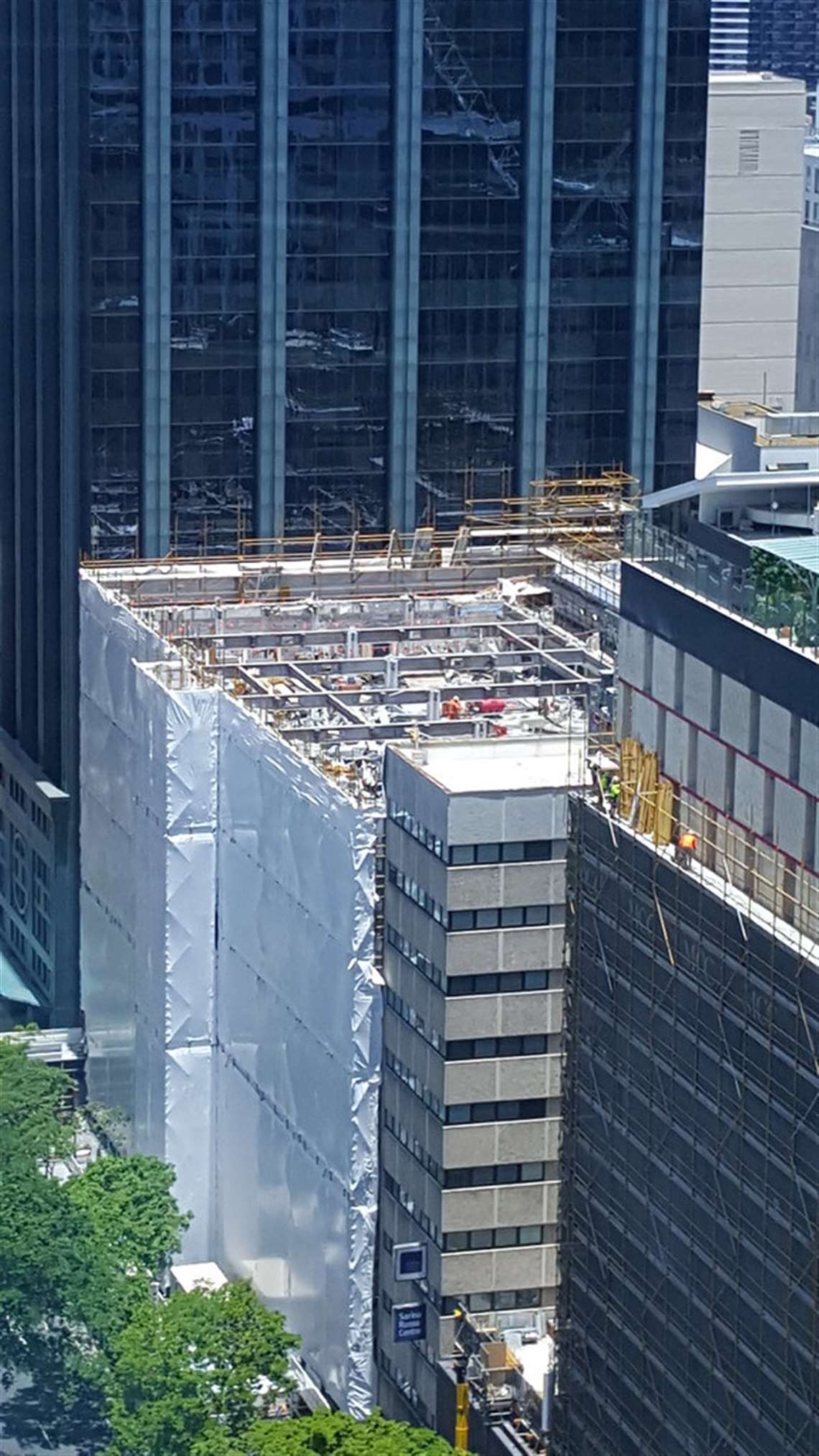 The demolition project in progress

The demolition of the Department of Primary Industries building was highly successful in the circumstances presented. Most importantly, there were neither any worker exposures to asbestos nor any breaches outside the controlled work environment with minimal impact to surrounding neighbours.

Daily communications
Successful completion of the project to Mirvac’s satisfaction can be attributed to the detailed scope and planning, strong daily communication between parties, high standard of quality assurance and certification processes, determination to provide a quality service to the client, and the fundamental principle of safety above all.