O’Keefe Demolition is nearing completion of a delicate enabling-works contract in the centre of London’s most expensive district. 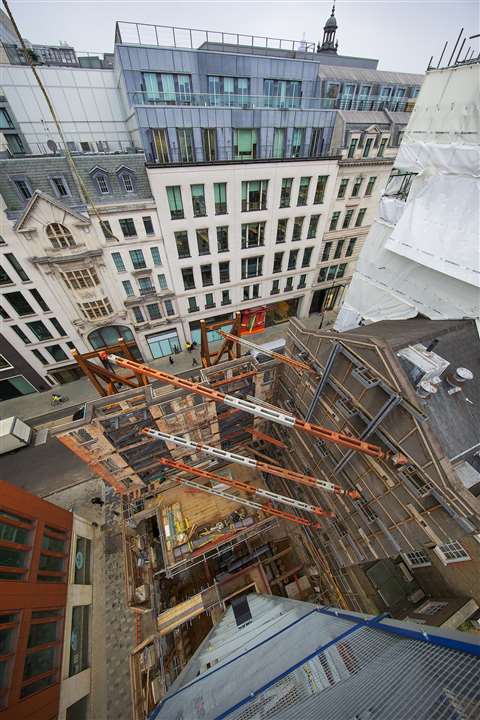 The project at Hanover Street is situated in the centre of London’s most expensive district. (Photo: O’Keefe Demolition)

The company, which was awarded the demolition, façade retention and basement construction project at 13-14 Hanover Street in Mayfair by Frank Capital, has demolished nearly the entire structure, leaving only the original façade supported temporarily on a bespoke structural steel frame.

The project, located in the heart of the United Kingdom capital’s West End, spans from Hanover Street and includes 6-7 Pollen Street, a narrow thoroughfare running perpendicular to Hanover Street, which has posed various challenges in the management of pedestrians and traffic throughout the duration on site.

The installation of 100 tonnes of temporary façade supports to the Hanover Street elevation and the surrounding party walls enabled the wholesale demolition of the six-storey structure behind the façade. Waste arising from the demolition process was removed due to the confined location of the site.

Behind the retained façade, O’Keefe has excavated a cavernous 10 m (32 ft) two-storey basement and is now in the process of constructing the in-situ concrete retaining walls and basement slabs.

“All the neighbouring buildings are fully occupied and one of them is a Michelin-starred restaurant.

“We’re talking to the neighbours all the time. We let them know when we need to plan noisy work, and they let us know when they need quiet. We work around them.”

In addition, noise, vibration and dust levels on the project have all needed to be minimised, with good traffic management also essential.