German Demolition contractor Todte has become the first company in Europe to put Volvo CE’s EC380E Straight Boom through its paces – taking down a former prison in the process. 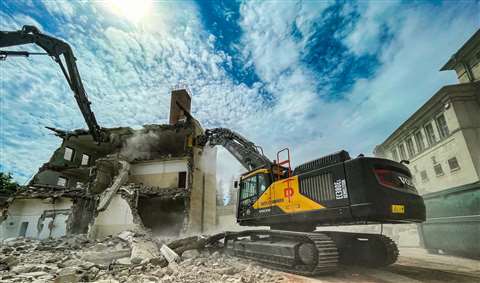 The EC380E with extended-reach configuration was chosen to demolish the former Naumberg prison in Germany. (Photo: Volvo CE)

The Naumburg correctional facility – in the state of Saxony-Anhalt in the east of the country – once housed more than 250 inmates.

However, it had stood empty for several years and will be replaced by a development including a hotel, gallery, wine bar and several apartment buildings.

Only the historically listed courthouse on the site will be preserved.

The first phase for Wiesbaden-based Todte involved demolishing the former prison and detention centre buildings, which were up to 29 m (95 ft) high.

This required excavators with a long reach to tackle the masonry. In addition to a two-year-old Volvo EC380EHR with long front equipment, a brand-new Volvo EC380E Straight Boom made its debut.

Todte commissioned the first European order the excavator with extended-reach configuration in the spring of 2021.

It was supplied by Volvo dealer Bischoff, whith whom Todte has had a relationship for over 40 years.