On Sunday, December 15, 2019, in the city of Mar del Plata – one of the main tourist destinations in Argentina due to its history, weather and location – a serious fire broke out in Torres y Liva, one of the largest wholesale distributors of cleaning, household and beauty products in the province of Buenos Aires. The fire affected historic buildings that were built more than 60 years earlier.

This fire posed a risk for many lives, public safety, and nearby buildings, forcing the evacuation of several neighbours in the vicinity. The gas and electricity services in the block were cut off. 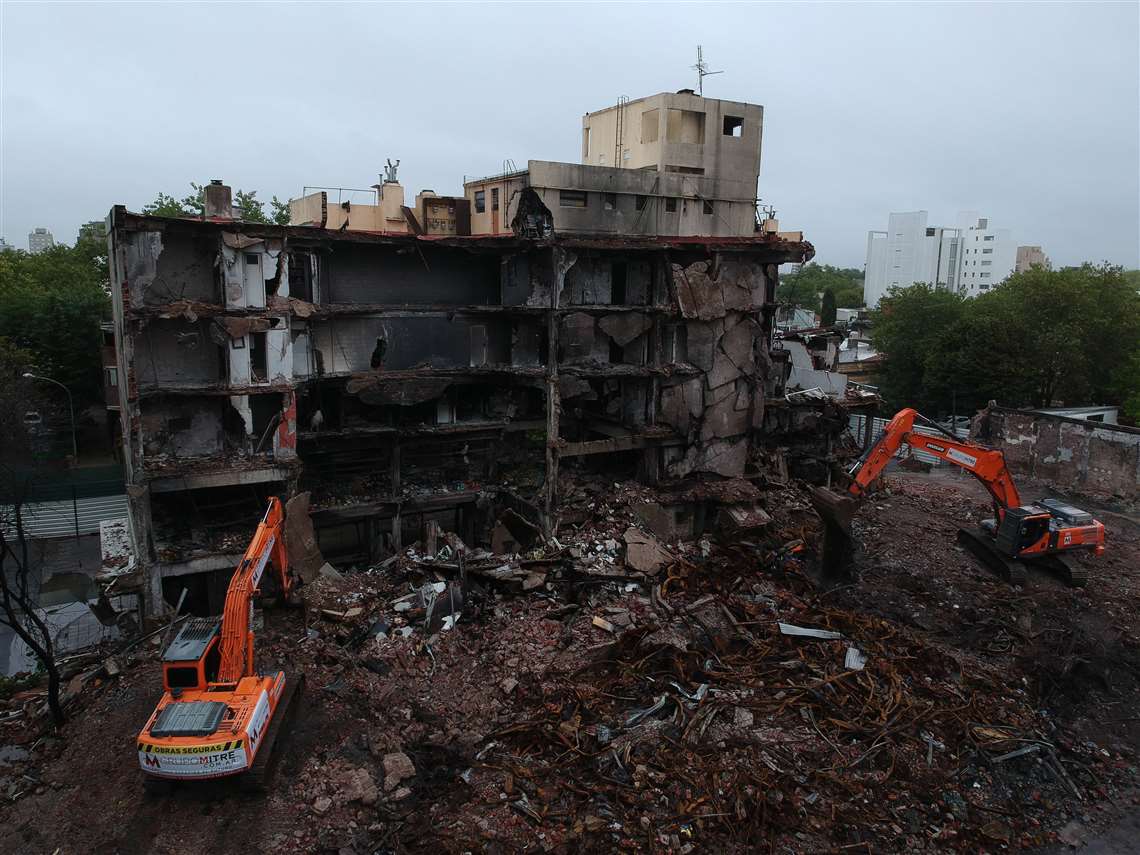 In the early hours of the next day, the residential building located above the company partially collapsed, causing one of the city’s most tragic events.

Because of the condition of the building, there was a risk of collapse. The structure was damaged, which meant demolition would be complex as public safety had to be ensured. Municipal agencies decided to call the largest private companies nationwide, which had to prove their background and experience in works of similar characteristics and importance, both in the private and public sectors. 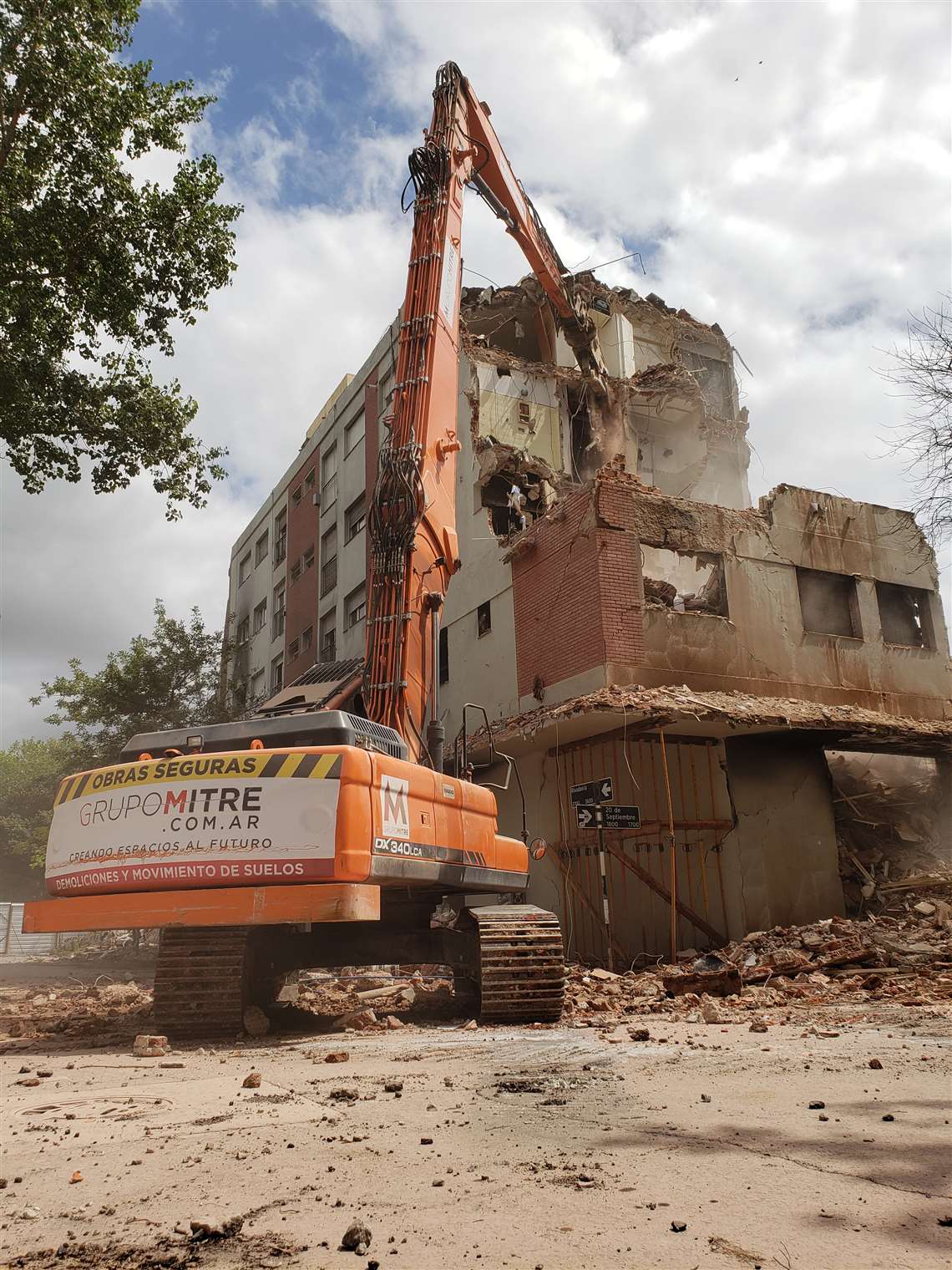 After the proposals were analysed, Grupo Mitre was awarded the contract.

The technical department of Grupo Mitre developed a demolition method that led to an official protocol published by the municipality of General Pueyrredon and which consisted of four stages.

In the first stage, dealing with the security perimeter, the different areas for positioning and circulation and the different sectors were determined, each with their own characteristics and regulations, according to use or inherent complexity. The site was divided into a Red Area and a Yellow Area.

The red area allowed access exclusively to agents and operators working on demolition tasks and on retaining the perimeters surrounding this area. The physical delimitation was made with a double perimeter, one with a box-rib aluminum fence and shade cloth, and a parallel one, on the municipal line, of wooden boards to protect the facades of surrounding houses.

In the yellow zone, pedestrian movement was determined in the schedules ordered by the control forces. This was because, although the area was protected by the perimeters of the red zone, the safety of pedestrians could not be guaranteed while heavy machinery was in operation. During prohibited hours, only authorised agents and officers were allowed.

An Emergency Operations Centre (EOC) was set up to provide permanent logistical follow-up, space for work meetings and consultation with the authorities.

A path was established for ambulances, which were always present in case of emergencies, and if necessary, transfers were made through this path.

The Fire Department located its operations base in another entry, with their own water wheel to ensure better performance in case their intervention was necessary.

Our company installed a workshop including all the necessary services for the personnel, on 20 de Septiembre Street, between Rivadavia and Belgrano Streets.

The circulation hours and permits were reinforced by the local police and the fire department. Without their control, most of the owners would have entered the burnt down building, risking their lives and others. Moreover, many tasks were complemented with the collaboration of the local employees of the municipality during the process of demolition.

The organisations involved in the project were:

* Police Fire Department of the Province of Buenos Aires

* Police of the Province of Buenos Aires 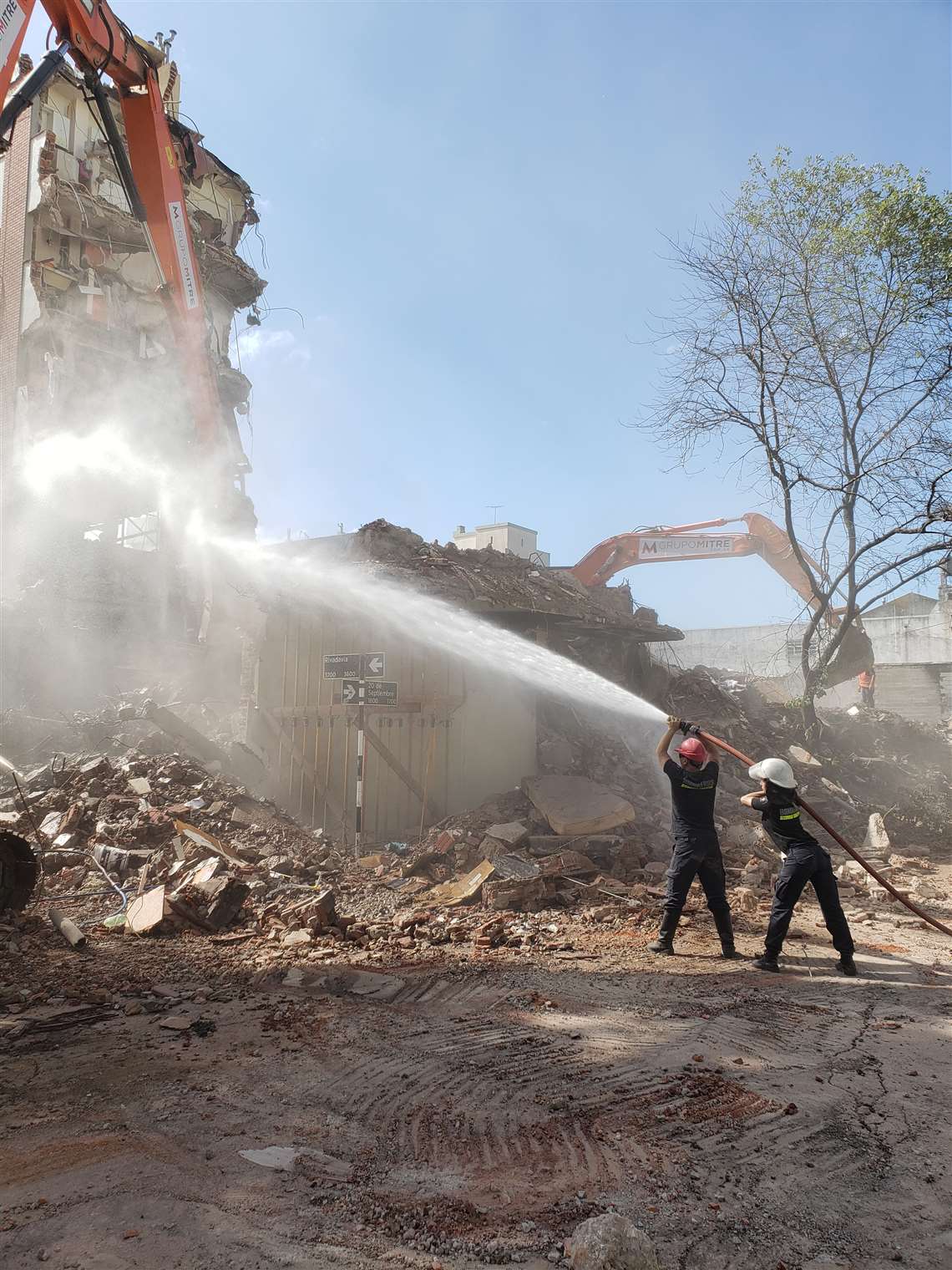 To organise the everyday tasks, daily coordination meetings were held prioritising the safety of all involved. This ensured the efficiency of the team =work.

A vibration measurement cabin was installed, featuring seismographs. It was located near the building to control, during operation, the evolution of vibrations due to the risk of collapse.

An anti-seismic trench was also built inside the site to reduce the propagation of vibration to the boundaries. 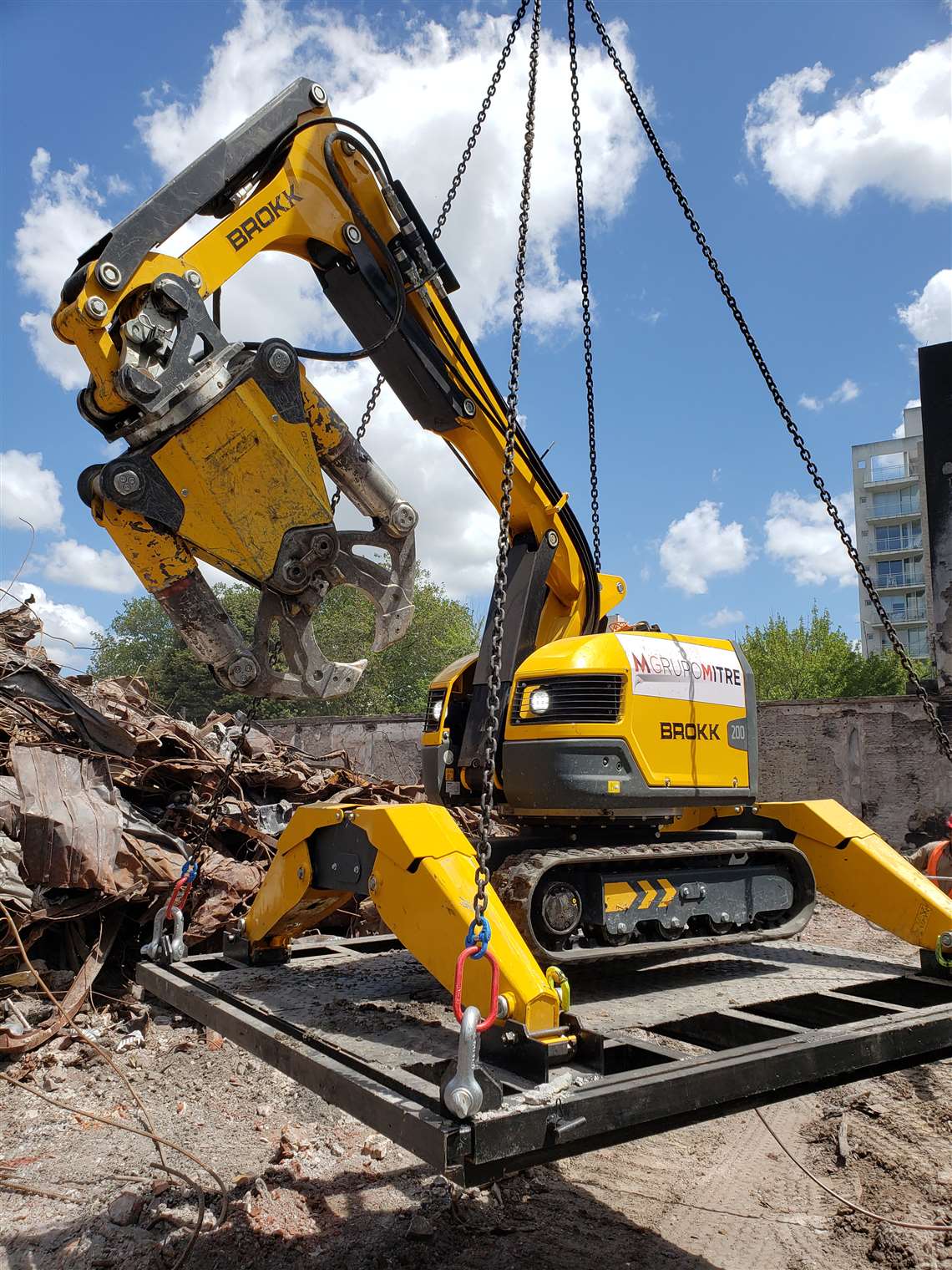 The machinery used was a Doosan 340 high reach demolition excavator, with an operating height of 21.25 m (70 ft). The equipment, which Grupo Mitre said has attachments that guarantee the best performance for this type of work, performed a controlled demolition using a hydraulic clamp, which breaks the concrete without generating large fragments.

Moreover, a Brokk 200 Demolition robot was used, which is described as having high power accessories and allowing great versatility due to its reduced size. Its main advantage is that it can be operated remotely, so the operator was located at a sensible distance, safe from the possible structure collapse. It was lifted by a 70 t crane, allowing the equipment to be kept above the structure to be demolished. With the clamps, the areas not reached by the excavator were demolished.

To recover personal items for the homeowners, the personnel of the Civil Defence Unit, the Fire Department and Grupo Mitre conducted a thorough review of the debris in search for items that were not destroyed by the fire. This took more time, but was still within the 45 days allowed for the project. 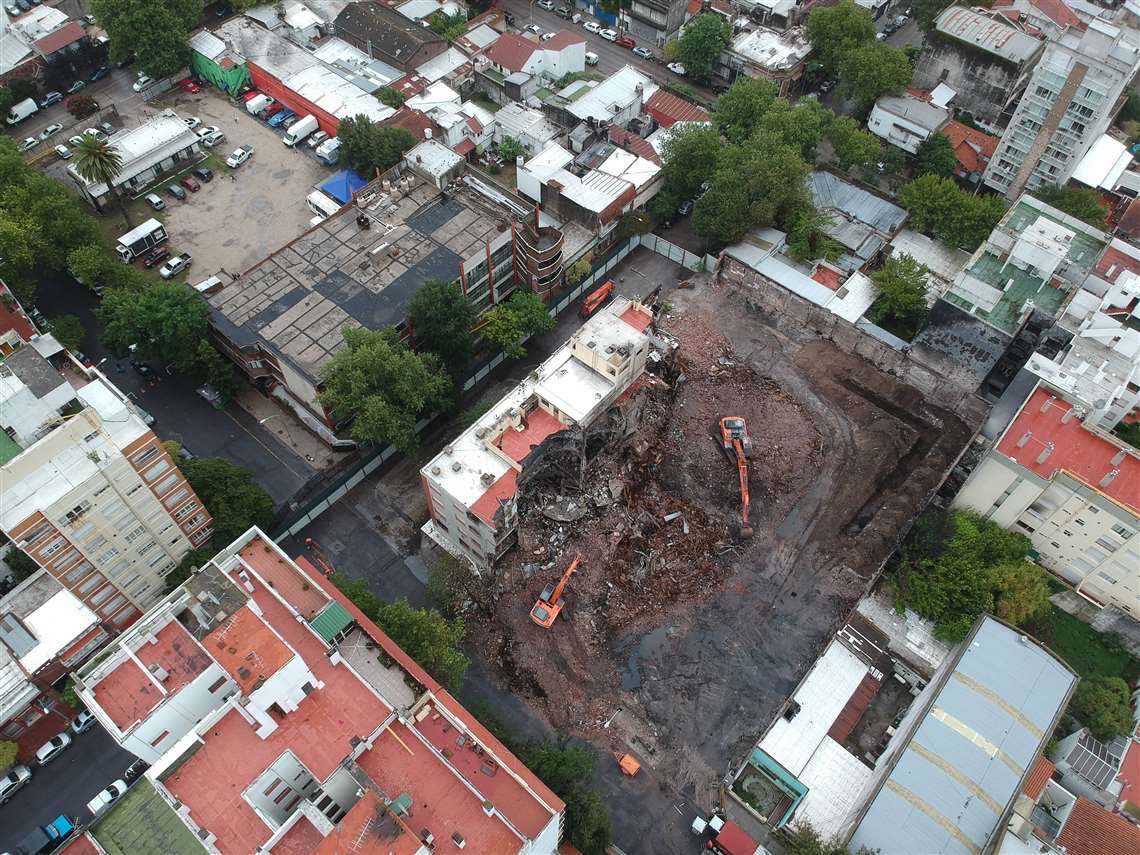 An aerial view of the site

Grupo Mitre carried out the separation of all the material resulting from the demolition, as per its recycling policy, and 95% of the material was reused. Debris was crushed and transported to the municipal recycling plant. Scrap was recycled as such. The plot of land was left clean, levelled and fenced, along with a general cleaning of both the site and the surrounding area.

The company said: “The contribution and teamwork of government institutions with our company achieved great results. The largest fire in the history of the City of Mar del Plata resulted in no fatalities, no accidents were registered during the demolition, and more than 1,000 personal items were recovered from the debris and returned to the owners. 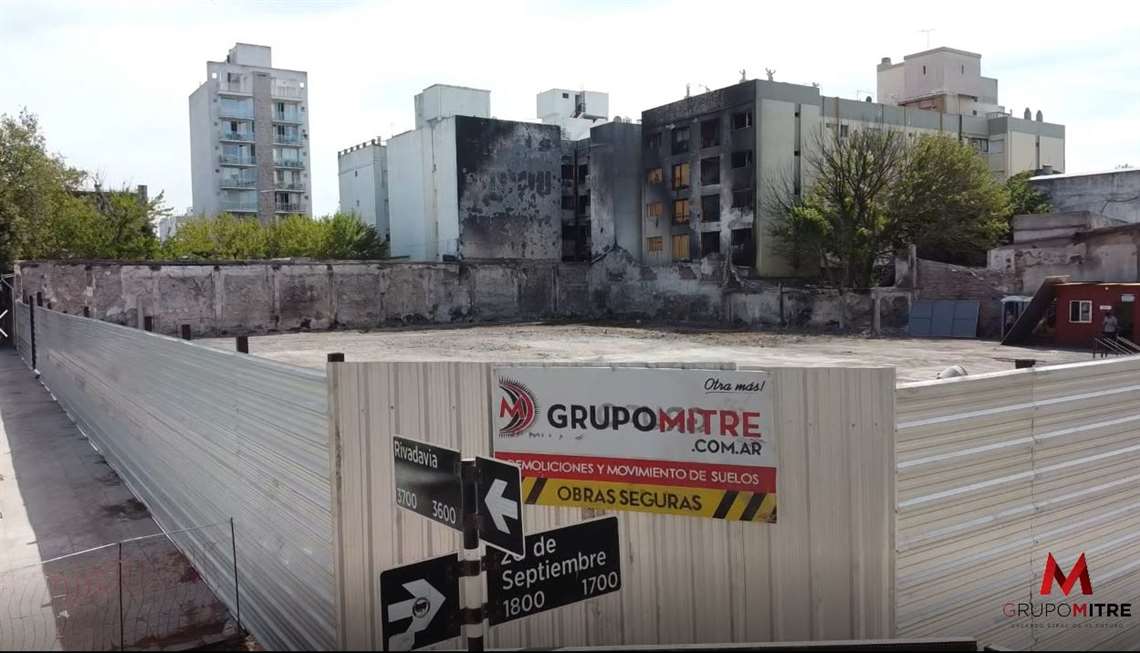 How the site looked after the completion of the project

“Without the coordinated teamwork and effort, the successful demolition could not have had happened, taking the stressful situation into account, were the building owners lost everything they had and wanted to recover the simplest of objects.”