Goody brings down the House

United Kingdom-based contractor Goody Demolition is in the process of dismantling the former Colonial Mutual Life headquarters in the south of England and has brought in its high-reach Volvo EC300E to head-up the process. 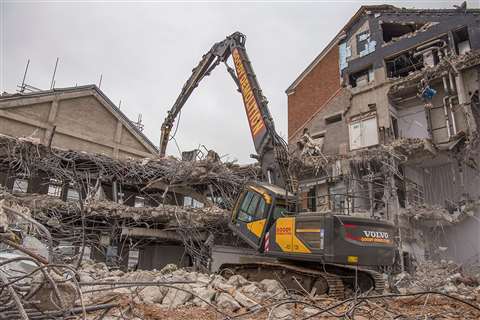 Built in the 1990s at a cost of around £35 million (US$46 million), Colonial House in the town of Chatham, Kent, has been empty for the past few years. It is being redeveloped by Persimmon Homes, to provide a mix of one and two-bedroom apartments, plus three and four-bedroom homes, as part of a waterfront residential development.

Site clearance and demolition is well underway and being handled by local specialist Goody Demolition.

But it has been far from straightforward as the 32-week project has thrown up some interesting challenges along the way.

“The building is a heavily reinforced concrete structure with an outer brick skin and a steel roof,” said site manager and high-reach machine operator Paul Hougham.

“And given the amount of steel buried within the concrete, it was probably engineered to withstand an earthquake.

“This is one of those buildings that was never going to fall down, nor come apart easily.”

Established over 50 years ago, Goody Demolition specialises in demolition, asbestos removal and remediation across London and the south east of England. It has grown significantly over the past 15 years under the directorship of Gary Venner, and currently operates with a fleet of over 22 excavators and a workforce of around 75.

The firm has several Volvo excavators in its fleet bought through British dealer SMT GB.