If a sign of the direction of travel for a sector is one of its manufacturers creating a world-class product, the breakers market just now looks very healthy indeed. 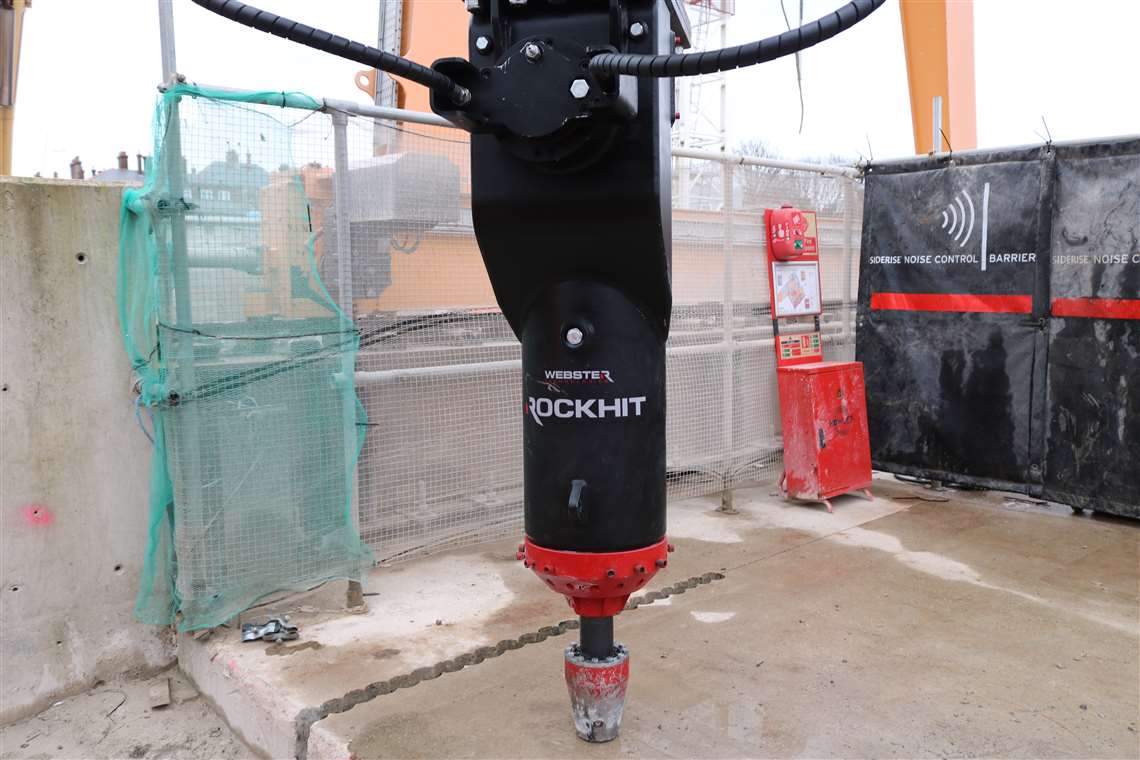 Webster’s Rockhit product may be new, but hydraulic breaker attachments are far from it. Webster says they have been used in construction, demolition and quarrying worldwide for more than 50 years, creating a global market estimated to be worth over US$1.5 billion. During that time, Webster became best known as the original designer of the Rockwheel rotary cutting attachments, which it supplies into the United Kingdom through a licensing agreement with German company Rokla.

High impact and low frequency with Rockhit
The Rockhit is a breaker that Webster describes as having exceptional breaking power through a high impact, low frequency operation and a patent protected design.

It has been designed for carriers between 13 and 18 t and Webster says that traditionally to deliver this amount of energy in a breaker, a carrier of at least 30 t would be required. In addition, the company estimates a reduction of 13 t of carbon dioxide a year.

At 90 bpm, noise levels are more tolerable and exposure times are said to be significantly improved, while a shock absorption system is in place is said to result in very low levels of shock loads measured on the equipment, excavator and operator.

United Kingdom-based BPH Attachments has over 45 years of experience in the construction industry supplying hydraulic excavator attachments for purchase or rental.

The company operates out of depots in the south of England and the midlands, also offering servicing and repairs of all hydraulic attachments.

BPH – from sound-sensitive sites to large demolition projects
BPH is also the exclusive importer to the United Kingdom of Prodem attachments. The Prodem range comprises 22 categories of attachments to suit most demolition and construction applications, including hydraulic hammers. The PRB Series of vibration dampened silenced hydraulic hammers has been developed for the toughest environments. They are fully silenced for sound sensitive job sites but are also said to be powerful enough for the largest demolition sites. Models from the PRB150 upwards benefit from a “pro-speed” dual speed control system, anti-blank firing system, rock claws, auto-stop and auto-start. Models from the PRB170 upwards feature a single high-pressure accumulator. 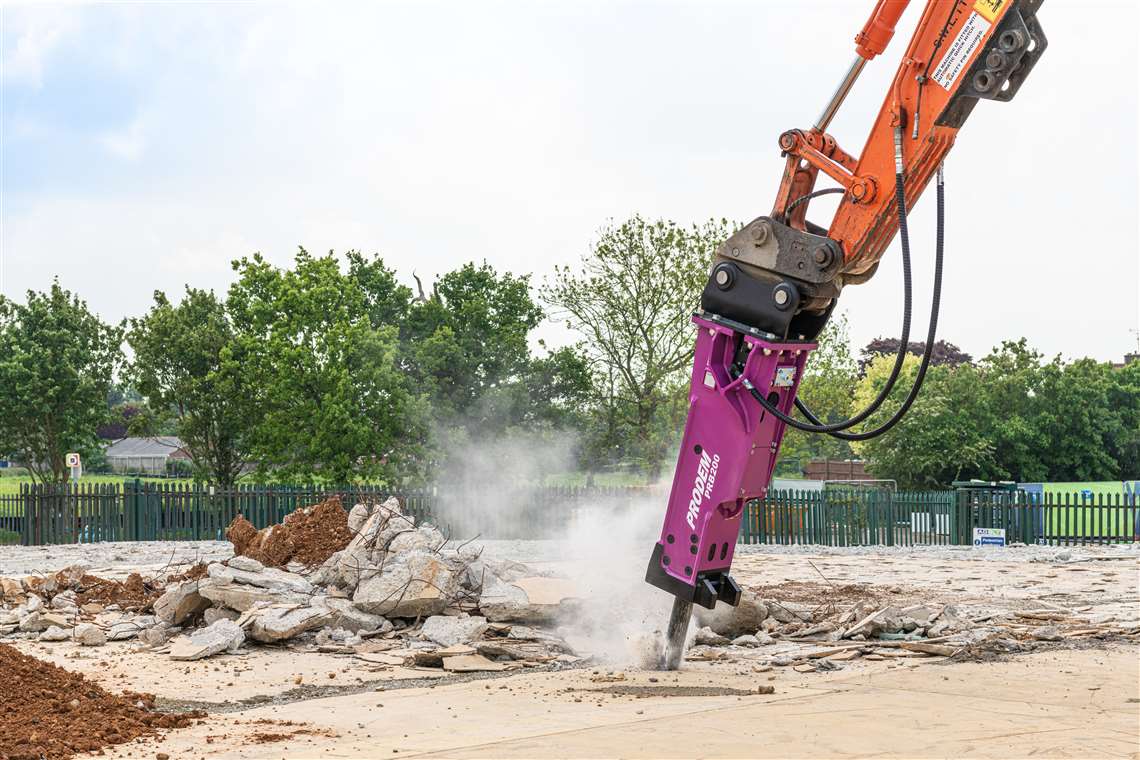 Prodem attachments have been seen in use on some of the most high-profile demolition and construction sites in the past year including the Hams Hall nuclear power station, Crossrail, M20 and M23 smart motorway projects, the Arla site, Thames Tideway and many more.

The family-run company recently expanded the range of models on offer on several of its products. The PRB1000, which fits 85 to 140 t excavators, was added to the hydraulic hammer range.

Doosan applies heat treatment process to new range
In addition to the Prodem range, BPH is also a nominated dealer for Dynaset hydraulic magnets, auger torque drills, and hammer mulchers and flails from Berti, as well as recently being named UK and Ireland dealer for USA-based manufacturer LaBounty, including its MDS steel shears.

The range of five breakers has been optimised and fully certified for Doosan excavators with carrier weights from 1.2 to 15 t.

The breakers feature a heat treatment process and what Doosan describes as proven materials for key components including the cylinder and piston. The energy of the piston stroke is accumulated by charged nitrogen gas and the breakers use an inward valve system with a simple structure and fewer inner parts.

A urethane damper prevents vibration that might damage the carrier and improves operator comfort. The front head supports the breaker and assemblies with bushing, which buffers the shock from the tool. The low noise housing is ideal for working in urban zones, where noise levels must be controlled or where local regulation may require silenced breakers. 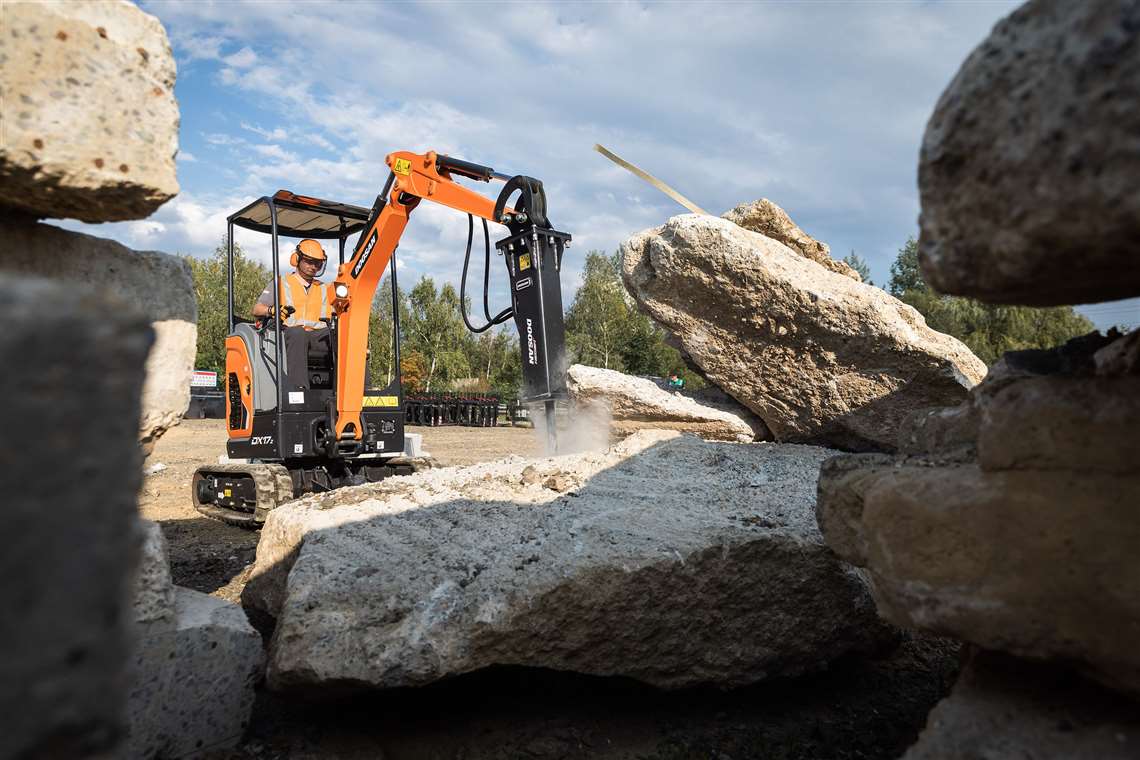 Dutch manufacturer Dehaco has developed its Ibex hydraulic breakers for applications including breaking concrete structures and other environments where controlled force is necessary. All models are protected with a specially designed housing which is described as making them suitable in a variety of applications.

Consequently, inspection points have been introduced in the housing, allowing regular checks to be made on the through bolts. Dehaco says the housing can withstand the toughest conditions and has a modern appearance. An optional automatic lubrication system helps keep the breaker in condition, and in combination with a special set the breakers can also be operated underwater.

The larger models in the GS series, designated from 1200 to 4000 feature an accumulator to generate additional impact energy. This also reduces peak pressures from the hydraulic circuit, reducing recoil to the carrier and protecting the breaker. When required, the breakers are available with an open housing, the GO (gas open) series.

The HS (hydraulic silenced) series covers four completely hydraulic breakers featuring the PAA (power absorbing accumulator) and OTC (oil traffic control) systems. These technologies are said to ensure a continuous and stable oil flow and operating pressure, where an optimal impact energy will be produced. Both systems act as a hydraulic shock absorber, where the constant impact energy further reduces any recoil to the carrier.

‘Nitrogen’ hammers from Demarec
All HS models feature ABF technology as standard. This is an automatic control system that comes into effect when blank strokes are detected during operation. According to Dehaco, this prevents enormous amounts of stress being applied to the vital components which increases the lifespan and reduces the wear of the breaker, as well as resulting in longer maintenance intervals.

Also in the Netherlands, Demarec, with its DSB and DFX series, has chosen to design and build “nitrogen” hammers to obtain a high power distributed over a higher number of blows per minute, resisting high counter pressures up to 25 bar.

The company says the compact structure of the hammer reduces stress on the excavator arm and ensure greater durability of both the hammer itself and its components.

According to Demarec, DSB and DFX hydraulic hammers can work on any type of excavator and on any single acting hydraulic system; they are also suitable for hydraulic systems with high back pressure Demarec hammers are equipped with special polyurethane shock absorbers that absorb vibrations to protect the arm of the excavator and reduce noise emissions.

The DSB series, for machines between 0.5 and 12 t are described as suitable for carriers, mini excavators, backhoe loaders and demolition robots.

The DFX series is for machines from 10 to 200 t and is suitable for medium and large crawler and wheeled excavators.

Hydraulic oil pressure on the piston
Red Line hydraulically operated membrane type breakers from Finland-based Green Attachments have been designed to perform all types of demanding tasks from boulder breaking to demolition applications. 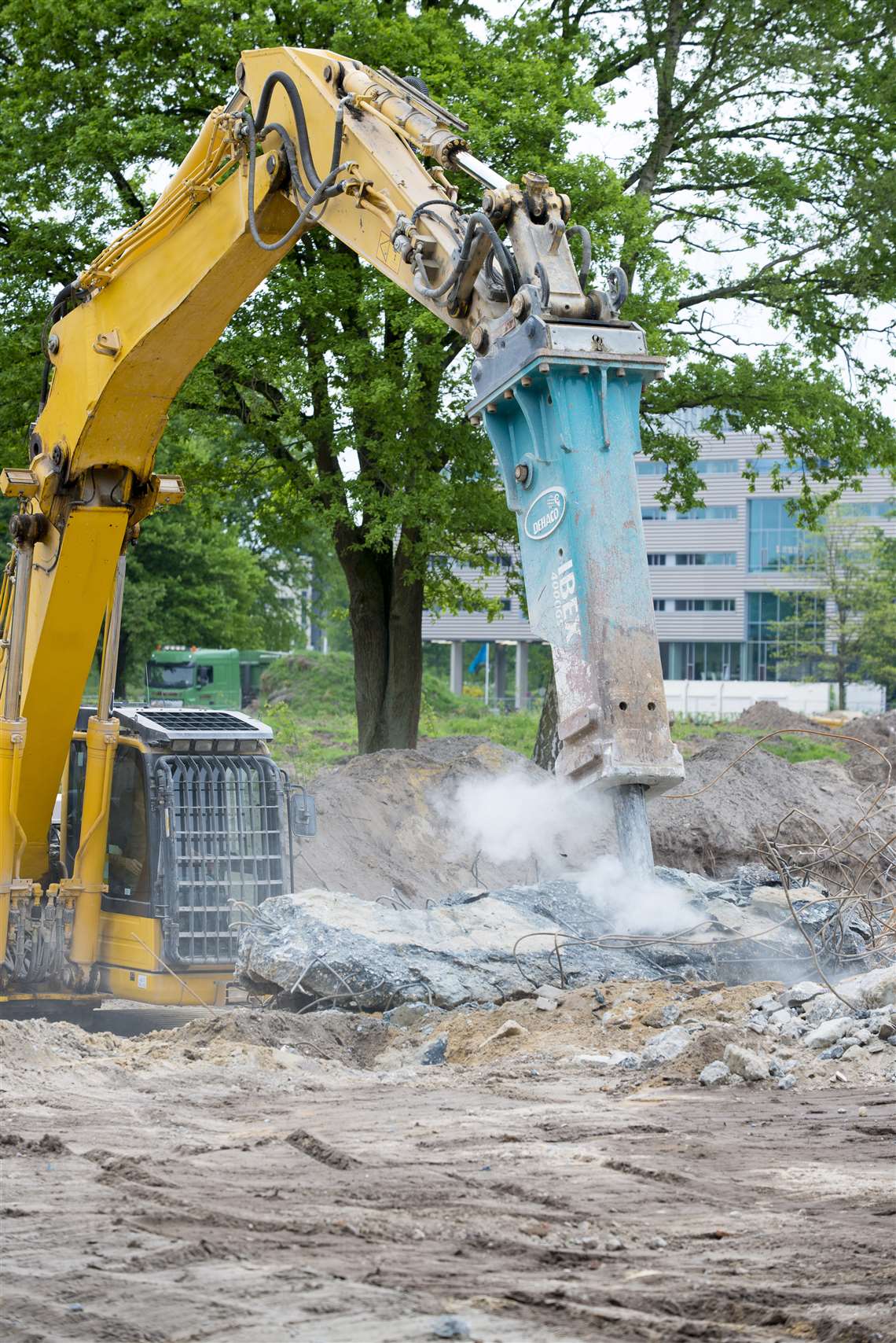 Movement is achieved by the hydraulic oil pressure on the piston head and speeded up by the oil and gas load of the accumulator on the top of the piston.

The main function of this accumulator is to keep the pressure same all the time at the top of the piston, with gas being added only during service Membrane type Red breakers are fully hydraulically operated, which the company says leads to reliable operation when productivity matters. They are said to operate in all possible positions due to long and light piston and large number of seals.

The hydraulic rock breaker range consists of 19 models for excavators ranging from 0.75 to 100 t excavators.

Also from Green Attachments, Piikki hydraulic breakers are gas assisted economy line breakers. The company has a growing group of customers who need a breaker occasionally rather than every day and might not be able to afford to buy a fully hydraulically operated Red line breaker, but instead would be ready to start with the Piikki economy range.

This range is suitable for demolition and excavation assistance, including frozen groundbreaking. According to Green Attachments, Piikki breakers accept higher back pressure and generally larger scale of hydraulic circumstances than fully hydraulically operated ones, while the small number of parts makes for a low cost of operation.

Inmalo have been an attachment dealer for over 20 years, “We took the decision to run the premium brand of breaker, we couldn’t offer our long-standing customers a cheaper make and risk losing all of their attachment business by offering an inferior hammer” said the company’s Charles Polak.

Inmalo says innovations such as automatic speed/power change can increase productivity and efficiency, and safety features such as overflow protection and pressure relief valves can reduce down-time and running costs.

All carrier sizes are catered for with five ranges of breakers from the small Silverclip range up to the Variable range for quarrying and heavy demolition works.

Silverclip hydraulic breakers are suited for 0.7 to 14 t excavators and robots. A “plug and play” hammer, they can manage a large range of hydraulic oil flows and back pressures.

The Medium range covers excavators between 10 and 22 t and has Beka Lube automatic greasing and energy recovery systems. The XL range, built at the Montabert factory in France, is for 20-100 t excavators. It has two power settings that change automatically depending on the working conditions. Described as suited to heavy demolition projects due to its power and robustness, it has overflow and blank firing protection for peace of mind.

Inmalo calls the Variable range of breakers its flagship product. Designed to be used on excavators over 18 t, with 12 to 15 variable speeds which automatically adjust to the hardness of the ground conditions, these hammers are by far the most advanced on the market and are designed for quarrying or demolition operations.

One customer, Richard Grant of Wessex Demolition, said power and build quality makes Montabert the choice for him.

“Montabert breakers help finish jobs faster as they are powerful and reliable. If we can finish a job early, it increases our profits.”