A female member of the Finning UK & Ireland apprentice programme is urging other women to join this year’s intake.

The company, which is the exclusive Cat distributor for those countries, has launched a major recruitment drive to attract a more diverse range of candidates. 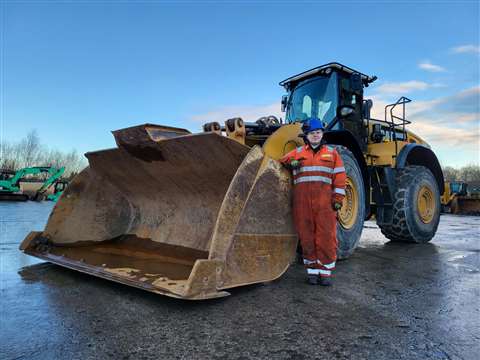 And 26-year-old Shannon Weiss, who started a four-year apprenticeship last September, is backing the company’s initiative.

“I’ve always been fascinated by mechanics and don’t mind getting my hands dirty, so this role was perfect,” said Shannon.

“It is hard work, very messy and not at all glamorous, but you get an amazing sense of satisfaction when you have fixed an excavator and it is back on site doing what it was designed to do.

“Traditionally, engineering is not a career that has tended to attract females who are often put off following their dreams by the thought of working in a male dominated environment.

“I would really like to encourage women who are passionate about engineering to apply for the apprenticeship programme.”

Finning said it “aims to widen the scope of its workforce by encouraging candidates from a cross-section of society, rather than just those who fit the typical profile of an engineer”.

It is also determined to “attract a more varied talent pool by supporting the recruitment of women, as well as candidates with disabilities, people from Black, Asian and Minority Ethnic backgrounds and those from socially deprived areas.”

Despite recent increasing numbers of women taking up jobs in the construction and demolition sectors, Finning added that figures from the Women’s Engineering Society show fewer than one in six engineers around the world are female.

At the same time, Association for Black and Minority Ethnic Engineers statistics put the total of United Kingdom-based engineers from the BAME community at 9%.

“Sadly, and to the detriment of the industry, many groups of people have long been underrepresented within engineering and we are determined to play our part in helping to remedy the situation,” said Finning UK & Ireland learning and organisation development manager Marsha Myles.

The closing date for applications to the apprentice programme is Friday 25 February, and more details are available on the Finning website.