And we’re off! WDS 2021 conference gets underway

After being forced online due to Covid-19 a year ago, the WDS has returned with more than 300 delegates registered. 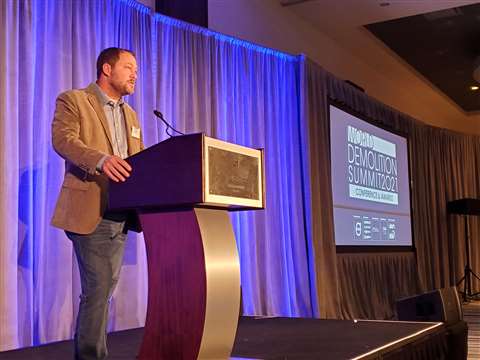 NDA president Scott Homrich speaking to the audience at WDS 2021

Many of them were present for a networking drinks reception last night and the numbers will be swelled further tonight when the World Demolition Awards dinner takes place.

Vanessa Willett of the FE Group told D&Ri: “I like the in-person events much more because that’s how you learn who people are.

“The WDS is not just a bunch of competitors. It’s people that are in the same industry that are trying to help each other grow the industry. It’s suppliers, vendors, it’s everyone working together to help make things better for the industry.”

Earl Proud from Philadelphia-based non-ferrous metals processor Thalheimer Bros has many demolition contractors among his customer base. He attended the Boston WDS two years ago and has returned at the first available opportunity.

“I liked what I saw in Boston. I met a lot of people. The great thing about this one especially is the NDA fall meeting happens with it and I’m a member of that too. It’s a two for one.”

Rich Elliott is at the WDS with silver sponsor Epiroc.

He said: “I come every time it’s in the US and when it’s in Europe, we’ve got counterparts there that attend.

“I’m also part of the National Demolition Association, so it’s good to be with the whole group that is in demolition, get to know them and get broader experiences from around the world.”