United Kingdom-based company CCC is expanding its recycling capabilities with the addition of a new wet processing plant from manufacturer CDE.

Based near Liverpool in the north west of England, CCC operates Waste Recycling, Skip Hire and Aggregates divisions, across the region.

Its Waste Recycling division operates three specialist depots and its Aggregates division can produce over 10,000 t of recycled materials a week.

The new plant will be used to process inert C&D (construction and demolition) waste generated by the firm’s muck away and excavation services, as well as from other companies.

According to the specialist manufacturer, upon the plant’s commissioning it will become one of the largest in the UK.

Michael Bibby, CDE business development manager, said: “We are very happy to announce that not only will the plant be one of the highest capacity waste recycling plants in the UK, but it will feature the UK’s largest overhead filter press – a 2m x 2m 246-plate press that will further support CCC to divert significant volumes from landfill.

”We look forward to working closely with Sean and the team at CCC over the coming months as we bring this project to life, unveiling it and its production specifications to the market to demonstrate the potential of wet processing technology for advancing the circular economy.”

The investment will enable family-run firm CCC to improve the circular nature of its operations, by producing a range of high-grade recycled sand and aggregates for reintroduction to the local construction industry.

Sean Munro, CCC director, said: “CCC processes a large variety of waste, from construction and demolition waste to that generated by households, including plastics, card and so much more.

“Recycled aggregate is a large part of our business and an area where we see great potential for further development in pursuit of reaching our ultimate aim to achieve zero waste to landfill.”

Michael said: “Both CCC and CDE are pushing in the same direction. We’re advocating for greater use and adoption of recycled aggregates and it’s this shared purpose – to create a more sustainable, circular world – that underpins everything we’re setting out to achieve with this latest recycling project.” 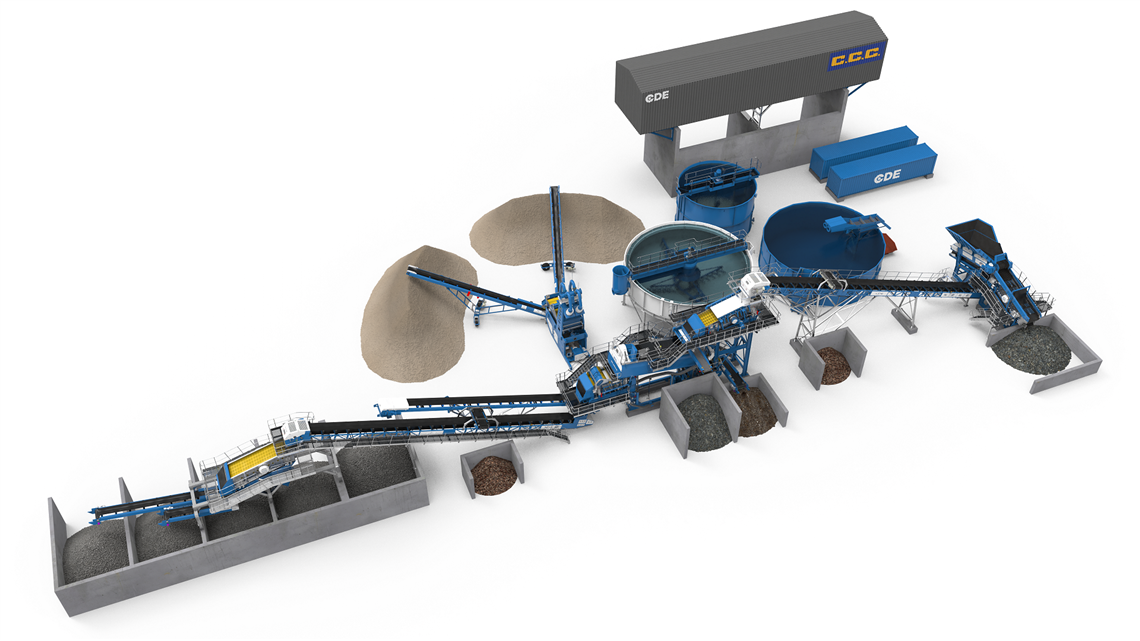 A 3D rendered image of the new wet processing plant from CDE that will be installed at CCC’s depot in Kirkby near Liverpool, UK.

According to CDE, the design for the plant incorporates what will be the biggest filter press in the country. The filter press will be specifically designed for CCC and will separate the liquids and solids using pressure filtration.

Munro said, “With the support of CDE we’re taking our first steps into wet processing to maximise the quality and quantity of the recycled aggregate we produce.

“The end result of this partnership will be a valuable asset for the North West, providing us with the technological capability and engineering capacity to play a major role in advancing the circular economy.”

CCC’s investment in the new plant comes just months after the company announced it was constructing a new repair and fitting centre at its Kirkby base.

The purpose-built centre, which also comprises office and welfare facilities, will allow the company to perform all maintenance and repairs operations in-house.

CCC, which was established in 1986, said the centre would allow it to make “significant savings” and improve the turn-around times of its equipment fleet.

The company said, “It will also have a training centre for continued staff training and to facilitate apprentices in the future.”

A 3D rendered image of the new wet processing plant from CDE that will be installed at CCC's depot in Kirkby near Liverpool, UK.
Previous Next ×