4 attachment options you can pair up with demolition robots

For interior and top-down demolition, many contractors have come to rely on remote-controlled demolition robots.

The smallest models easily fit through standard doorways and are light enough to transport using a passenger lift, making them ideal for demolition in tight spaces. 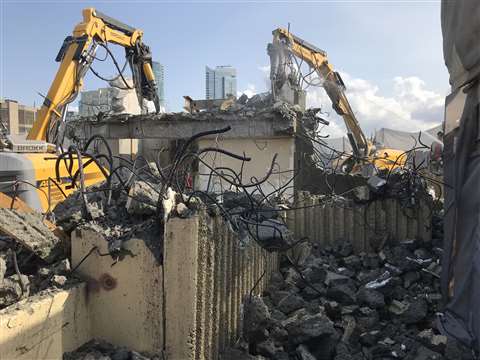 Crushers are one of the most common attachments for demolition contactors and can be used in sensitive environments (All photos: Brokk)

Despite this compact footprint, they can provide hitting power on par with excavators three times their size.

This comes from the pairing between carrier and breaker — standard equipment for these machines. For optimum performance, industry-leading manufacturers design their demolition robots starting from the tip of the breaker to ensure hydraulic flow and pressure are perfectly calibrated.

This increases efficiency and breaking capacity, but also results in less wear and tear on the carrier for a hardier unit overall.

However, solely relying on a breaker is selling these machines short.

A range of attachments are available from manufacturers, allowing operators to tackle a variety of tasks, such as material handling, excavation, surface preparation and much more.

Forward-thinking contractors are capitalising on the versatility provided by the right suite of attachments. The proper combinations can streamline their jobsites as well as open up new applications to grow their business — turning a demolition robot into a remote-controlled tool carrier.

Selecting the right attachments is key to unlocking the full potential of these machines.

Here are four attachments to consider for optimum efficiency with remote-controlled demolition equipment.

Concrete crushers
After hydraulic breakers, crushers are probably the most common attachment for demolition contactors. These attachments reduce noise and vibrations, so they can be used in sensitive environments. 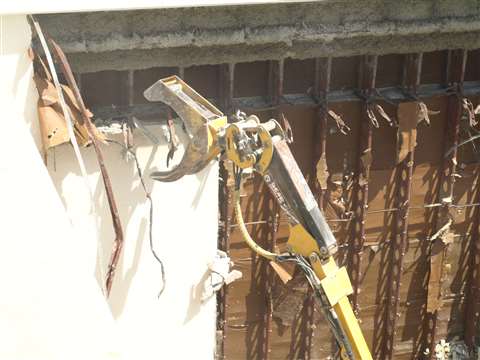 When paired with a flexible remote-controlled machine, a grapple can grasp and pull down structural elements

Where breakers use force to knock down a wall, crushers simply chew up the concrete, leaving rebar exposed. To do this, crushers require access to an exposed edge of the structure being demolished — either the top, side or end — to break it down. Imagine trying to take a bite from the middle of a piece of bread. It doesn’t work without bending the bread.

Taking a bite from any side, on the other hand, doesn’t require any special maneuvering. For top-down applications where noise and vibration constraints are primary concerns, crushers allow contractors to work during the day — in some cases without the neighbours even noticing.

Recently, a Canadian contactor was able to remove 38 storeys using crushers and remote-controlled demolition robots. The company’s primary focus was mitigating disruption to the local area with the dust and noise that accompanies any demolition project.

After erecting a hoarding system around the top of the building, the demolition area was hidden from the ground and neighboring buildings. The contractor worked down through the building’s floors, systematically crushing concrete and cutting reinforcement steel.

Working with two demolition robots, crews were able to complete one floor every three to four days, taking down the entire 38 storeys in just nine months.

Curious residents, unable to see or hear what was going on, questioned if the project was progressing until the protective hoarding structures were removed and the top of the landmark structure had disappeared.

In addition to “silent demolition” crushers also make material handling easier. The resulting debris is a uniform size, and steel is separated for recycling during the initial demolition instead of having to remove it later.

For maximum efficiency, pay attention to the jaw opening and crushing force. To easily take on concrete slabs that are 440 to 560 mm (17 to 22 in) thick, a crushing force from 44-54 t is best.

Metal and combi shears
Shears are another attachment that, when paired with demolition robots, can significantly increase safety and productivity on a demolition jobsite. 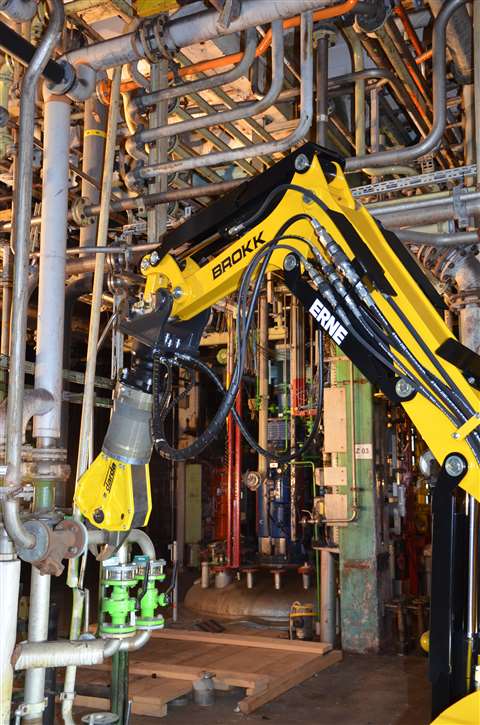 As with breakers, crushers and grapples, industry-leading manufacturers have taken advantage of the manoeuvrability and precision available from demolition robots to optimise their shear attachments, reducing the need for larger crews and handheld torches in a number of applications.

Because of floor load limits or other access restrictions for larger equipment, contractors have traditionally relied on handheld torches for metal cutting tasks on interior demolition projects.

The potential hazards add up to increased health concerns for workers, which is reflected in workman’s compensation claims and higher insurance premiums for employers.

Using a remote-controlled tool carrier with a shear attachment for these tasks eliminates many of the associated risks. Shears pierce or cut through material, rather than burn through it like a torch.

By removing heat from the equation, operators are also eliminating sparks, flying embers, and fumes. Compact demolition robots can also access confined spaces and areas with low floor loads. Using shears in these situations offers a mechanical solution that keeps operators safely on the ground while providing good view of the work.

And, while contractors should still ensure electricity is shut off before cutting wires or other conduit, it is much better for a robot to take an electrical shock than a human.

Look for shears with a high power to weight ratio. This allows for optimal cutting power in a smaller package, making it easier to maneuver the shears in tight spaces. Additionally, a hydraulic 360° rotary drive provides pin-point accuracy.

Multi-purpose grapples
Perhaps the most underused demolition attachment is the grapple, for soft demolition, separation and sorting applications.

It can also be used for support tasks before, during and after the primary demolition.

Grapples function like a rudimentary hand with two fingers and a thumb for pinching, pulling and sorting.

When paired with a flexible remote-controlled machine, the grapple can provide significant time and cost savings over manual demolition methods in tight, confined spaces. In many cases it removes the need for harnessed workers on ladders or scaffolding.

For example, the highly articulated attachment can be used to grasp structural elements such as drywall, ceiling sections, piping, steel drums and HVAC (heating, ventilation and air conditioning) ducts which the remote-controlled carrier machine can then easily pull down.

Remote operation also means workers can position themselves away from any falling debris while maintaining a good view of the work. 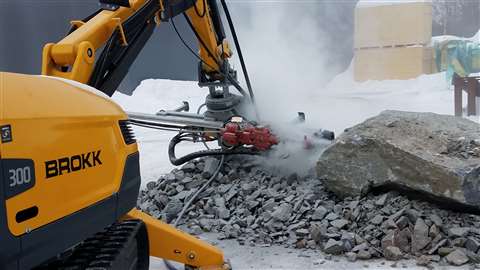 With the range of attachments available, a demolition robot can become a multi-purpose machine that opens up new revenue opportunities

Another example would be elements that require support, like a 10 cm (4 in) diameter overhead pipe that needs to be cut with a torch.

The grapple simply clamps onto the pipe and holds it while a worker torches through it on either end. Once it is free, the grapple safely lowers the pipe to the ground.

And grapples are not just for demolition. Grapple attachments can also be used for lifting, moving and support during construction.

Depending on the jaw opening and carrier size, these tools can lift materials up to 76 cm (30 in) in diameter. When paired with a demolition robot with exceptional reach, this means operators can remain safely on the ground and out of the drop zone for several overhead tasks.

Additionally, once materials have been pulled down, the precision and flexibility of the remote-controlled demolition machine with the grapple attachment makes it easy to pick up and sort even small debris.

Buckets
Finally, no suite of robotic demolition attachments would be complete without a bucket. These multi-purpose tools increase efficiency for confined applications such as excavation, digging trenches, material handling, sorting, separating and loading debris.

Since they are primarily designed to optimise breakout forces for hammering above and in front of the machine, the demolition robots’ boom design provides ample power for digging in rocky soil and heavy clay.

It also provides increased reach and manoeuvrability compared to most similar-sized mini excavators.

An innovative a three-part arm allows demolition robots from leading manufacturers to work closer to the carrier body, minimizing the need to reposition.

Most models only require 182.9 to 213.4 cm (72 to 84 in) of height clearance for excavation, allowing operators to work in situations with low overhead clearance, such as tunnels and utility applications.

Remote-control operation keeps employees safely on the ground and outside the immediate work zone, protecting them from dust and flying debris. It also eliminates the need to climb into or out of a cab, which is a leading cause of jobsite injury often resulting in sprains, strains and other minor ailments.

Author’s details
Jeff Keeling is vice president of sales and marketing for leading remote-controlled demolition machines and attachments manufacturer Brokk Inc. He works closely with regional sales managers to develop and grow the Brokk brand in key segments across the United States and Canada and is responsible for educational initiatives aimed at helping customers maximise their Brokk machines’ potential.