A British demolition contractor has announced a reduction in carbon emissions by more than two-thirds, less than a year ago after trialling HVO (hydrotreated vegetable oil). 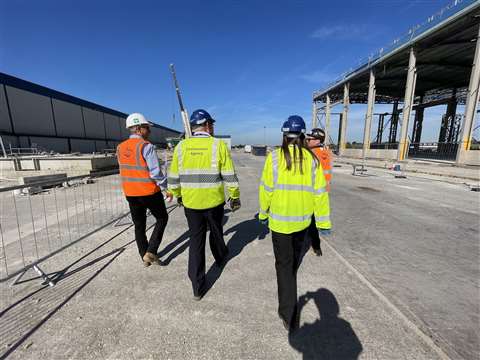 Cawarden received a site visit from the UK Environment Agency after reducing carbon emissions by more than 60%. (Photo: Cawarden)

Cawarden, based in Derby in the English midlands, said it had made “substantial strides” since it introduced the fossil-free fuel made from waste fats and vegetable oils, with a 67% drop in emissions in 10 months.

Based on the success of the initial trial, a phased transition and roll-out of HVO across Cawarden’s excavators and site machinery has been taking place.

HVO has the potential to eliminate up to 90% of net carbon dioxide compared to diesel and without any modifications to existing engines, as well as significantly reducing nitrogen oxide, particulate matter and carbon monoxide emissions.

Cawarden is committed to reducing its impact and achieving its net-zero target – a commitment that has been cemented by joining the SME (Small and Medium Sized Enterprise) Climate Hub and signing up to The Climate Pledge – a formal commitment to reach net-zero by 2040, or 10 years ahead of the government’s target.

The Environment Agency, which introduced Cawarden to the De-Carbonisation Project partnership, was recently invited to visit one of its demolition sites.

Jonathan Groves, Cawarden’s quality director, said: “To put it into context, we’ve saved the equivalent emissions of 94 single flights to Sydney, Australia, or 1,072 t of carbon, so far. It’s enormous progress in such a short amount of time and it was great to invite the Environment Agency to see our machines in action.

Victoria Prowse, regulated industry officer at the Environment Agency, added: “Cawarden has made a significant step forward in its de-carbonisation journey.

“We hope that through their work they inspire other firms to follow their lead.”