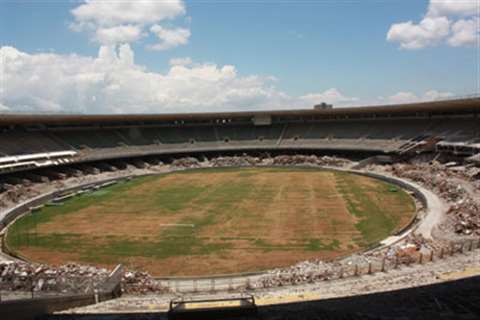 In Brazil, one of the most revered football stadiums in the world is undergoing reconstruction, at an accelerated pace, in time for the 2014 World Cup. Leonardo Bastos reports for D&Ri.

Inaugurated as the world's largest stadium for the 1950 World Cup, the Maracanã has fascinated everyone who likes soccer. The best players in soccer history have graced its pitch, including Pele, Garrincha, Tostao, Maradona, Zico and many others.

Now, the stadium is in the process of rebirth in order to host 2014 World Cup matches. It will remain colossal in size, but will also be a new, modern, safe and comfortable structure, as required by FIFA requirements.

And, the construction goes on at an accelerated pace. The winners will be the fans, Brazil and Rio de Janeiro, who will have the privilege of seeing their postcard scenery revitalised.

As a likely venue for the final of the World Cup, the Maracanã Stadium has shown its potential to be even better.

The renovation began with the upper terrace of the stadium, which includes press facilities, according to a report published in the December edition of Tracbel Magazine. About 80% of the so-called "whiskers," the stadium access ramps, have been demolished, as well as the entire lower terrace.

Demolishing the lower terrace is a FIFA requirement in order to improve the fans' view and to eliminate stadium "blind spots" that formerly existed. To achieve this, the stands will be extended down to pitch level at 45 degrees.

"The standard of visibility required by FIFA says that all spectators should see over the head of the fan sitting two rows ahead in a straight line," explained the State Secretary for the Public Works of Rio de Janeiro, Hudson Braga.

The construction of the Maracanã complex, as it has been called, began in August 2010 and is scheduled to end in February 2013, immediately before the Confederations Cup, an event that precedes the World Cup.

The Consortium Maracanã Rio-2014 is carrying out the construction (made up by the companies Andrade Gutierrez, Odebrecht and Delta) and it estimates that expenditure will total BRL705 million (US$417 million).

In addition to demolishing the lower and upper terraces, the main changes involve constructing new access ramps in order to reduce its evacuation time by 30 minutes to the eight minute maximum time set by FIFA.

The maximum capacity will also be reduced from 82,000 to 76,000, thus allowing comfortable and numbered seating.

To carry out the demolition of the lower ring and upper part of the stadium, three Volvo excavators with EC210BLC hydraulic breakers took part in the entire process. The equipment belonged to two subcontractors, based in Rio de Janeiro, active in demolition rental - P.M. Montaleone Equipment Rental and Tornibras Rental.

Founded in 1965, Tornibras has vast experience in the demolition sector in Brazil and abroad. "In 1997, we undertook activities in leasing hydraulic breakers, and we gained experience and our customers' confidence throughout the years.

Currently, the company participates in major works based in Rio de Janeiro, such as the Maracana project, construction of the Barra da Tijuca subway system and the new urban bus transport, BRT, which is under construction in the Bandeirantes area of Rio de Janeiro.