Getting the power down in the Philippines 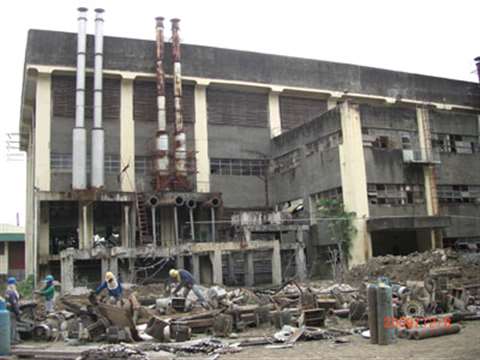 The Aplaya power plant in the Philippines is undergoing demolition

A more than 30 year old power plant in the Philippines is undergoing demolition to make way for a new replacement and modern demolition attachments fro Okada are speeding the work. The plant is at Aplaya, some 27 km (17 miles) east of Cagayan de Oro City on the island of Mindanao. The challenge for contractor TEC Industries Inc was to separate I beams and rebar from the reinforced concrete structure as quickly as possible to shorten the demolition time and thereby reduce costs to the client.

An Okada engineer visited the site to determine the optimum solution for TEC - in this case a TS-WK800V ARTS crusher (the company's first ever crusher) that offered the power and versatility to carry out both primary demolition as well as act as a secondary pulveriser to separate and cut the resulting rebar waste. The resulting scrap metal will be sold for recycling. By the end of December 2009, 25 tonnes of such scrap had been produced on the site.

A total of 50 TEC personnel are working on the site, using three Cat machines - a Cat 330C with an Okado TOP250 breaker along with two Cat 320Ds, one mounting an Okada TOP200 breaker and the other fitted with the crusher.