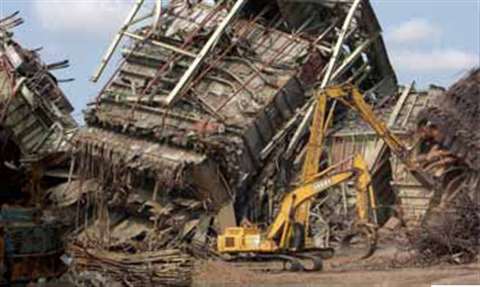 The scale of the Lakeview Generating Station job is clear

The Lakeview Generating Station was completed for a cost of C$274 million (€181 million) in 1968, at which time it was the largest thermal-electric plant in the province of Ontario. Current province government policy is for all six of the area's coal-fired power stations to be phased out of service. As a result, demolition began during 2007 on the Lakeview facility, with the work on the 130-acre site being carried out by Murray Demolition, one of Canada's leading contractors – and in17th place in our 2007 D&Ri 100 ranking.

The most obvious sign of this ongoing work was when the four 146 m (480 ft) concrete chimneys were imploded in June 2007. The chimneys were known as the Four Sisters, since two of the plant's eight boilers were paired or ‘sistered' to each chimney. Once they came down, Murray got started on the job of clearing the resulting debris and the massive steel structures of the power station, which is made up of a complex of conveyors, coal hoppers, boilers, heat exchangers and turbines.

Murray strategically severed the steel columns of the structures to lay them as close to the ground as possible to allow heavy equipment to process the mass of steel and other metals, while also allowing Murray's work crews to work on specific areas of the structures. Primary shearing is carried out to dismantle the buildings, after which the materials are then segregated into #1 heavy melt, #1 prime scrap, shredding, various non-ferrous scrap, concrete and brick. Once the material has been sorted, secondary shearing is carried out as required to further break down the material. Murray personnel using cutting torches process any material that cannot be cut up using the excavator-mounted shears.

A fleet of hydraulic excavators is carrying out the shearing work, all equipped with Stanley LaBounty attachments. Twelve machines in total are at work on the site – seven with shears and five with grapples for sorting duties. Two carry out heavy shearing duties. The first is a John Deere 850D mounted with a 29,500 lb (13,410 kg) Stanley LaBounty MSD 750R ordered specifically for this job – the largest shear in the company's inventory and the first of this model to be deployed in Canada. This machine rips, pulls and tears the primary structure down, then shears and sizes beams up to the 10-12 ton range for stockpiling and hauling out. The second is a Caterpillar 330CL high reach with a Stanley 15000R shear that carries out the primary high pick and shear.

The Murray crews consider the other five excavators as being the secondary processing line-up and they are the production workhorses of the fleet. All are John Deere 450Ds that carry Stanley LaBounty MSD 300R shears – they largely work at ground level to cut hoppers, ducts, sheets beams, flooring and heat exchanger tubing.

Between the excavators and the torch crews, Murray is regularly removing between 700 and 900 tons of the various sorted materials every day. The entire job, including the remediation of the lakefront site, is expected to last for two years.