A past president of the United Kingdom’s Institute of Demolition Engineers (IDE) has described the graduation of seven industry professionals from the first Master’s Degree in Demolition Management as a “milestone moment”. 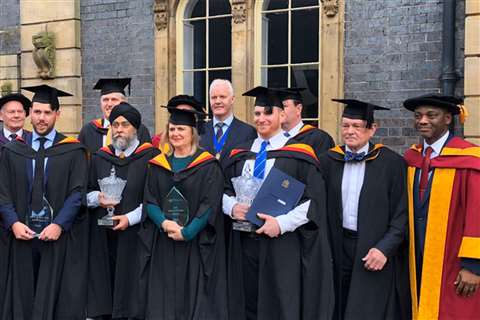 Graudates from the Demolition Management MSc course during the ceremony at Wolverhampton University, United Kingdom

Demolition consultant John Woodward, IDE president from 2010 to 2012, along with his immediate predecessor Dr Terry Quarmby, had the idea for the MSc qualification eight years ago.

The IDE signed an Article of Agreement with the UK’s University of Wolverhampton to deliver an MSc course starting in 2017 with a BSc course to follow in 2020.

Now the first intake of MSc students have been honoured at a graduation ceremony at the university, with both John Woodward and Dr Terry Quarmby present alongside current IDE vice president Richard Dolman. “A milestone moment in IDE history has arrived,” said John.

An IDE statement called the graduation “a very proud day” and added: “The ceremony was the culmination of two years of hard work for the students who became the world’s first recipients of the MSc.

“The long journey for the IDE marks the first major step in further professionalising the demolition industry and putting our members on an equal footing on the education ladder.

“We would like to extend our congratulations to the seven graduates completing the course and wish the remaining students all the very best in the final months of their studies.”

For more details of educational opportunities with the IDE, please visit www.ide.org.uk